As much as we look forward to Peak Stupidity, or more like its subsequent large down-trend, it has been fun and cathartic to report on all of the massive amounts of it in the meantime. Perhaps we will turn off our blog in a fit of pique (get it? I made it bold so people'd get it) when that fine peak occurs, but as of now, it piles up higher and deeper.

Per frequent commenter BernCar's forecast made under a post this past Christmas Day, the goal was set to get this 1000th post in by end-of-bidness/end-of-March. Due to lots of posting in January and February, this goal became an easy mark, attained today after a period of slacking all this week. Along with a bunch of commenting elsewhere, cough, unz.com, cough, cough, one of the impediments has been a battle with some artificial stupidity (a phone) that deserves a post of its own, in fact.

Here we are though, and an ideal way to celebrate is to mention something about Peak Stupidity's unofficial mascot, Mr. Alfred E. Neuman: 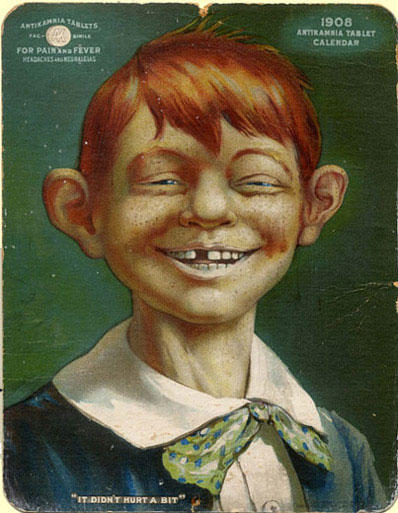 (A more modern-era image appears in our 2nd blogversary post.)

Commenter WorkingClass, suggested under our previous post some reading from the Paris Review, of all places, about the history of this Mr. Neuman, known by most as the former mascot for Mad Magazine. Hell, maybe that magazine is still around on-line or something, but a for The Onion, it's pretty hard to be funny making parody these days, as most of it will be mistaken for modern reality. That's a nice well-written investigative article, especially for those that like memorabilia. We did learn that the basic goofy guy has a history going back to the late 1800's and so YOU CAN'T SUE US!

One may note in the article on Alfred E. Neuman that a Mr. Al Feldstein, who commissioned the solidified version of the mascot or logo for Mad Magazine, reqested of the artist Mr. Norm Mingo:

that he didn’t want the boy to “look like an idiot—I want him to be lovable and have an intelligence behind his eyes. But I want him to have this devil-may-care attitude, someone who can maintain a sense of humor while the world is collapsing around him.”

Well, we at Peak Stupidity resemble this remark. Granted, at the time of the beginning of Mad Magazine, America was at its peak, not of stupidity, but of economic might, stability, unity, and a whole lot of other good things that are gone now. Now, the world IS collapsing, but we do try to keep up the humor, as can be seen in our scorecard here of the various flavors of stupidity* categorized by what we call "Topic Keys". Humor is right up there below Music as tops, and right above Immigration Stupidity, a very serious matter.


Number of related posts for each Topic Key (low to high): 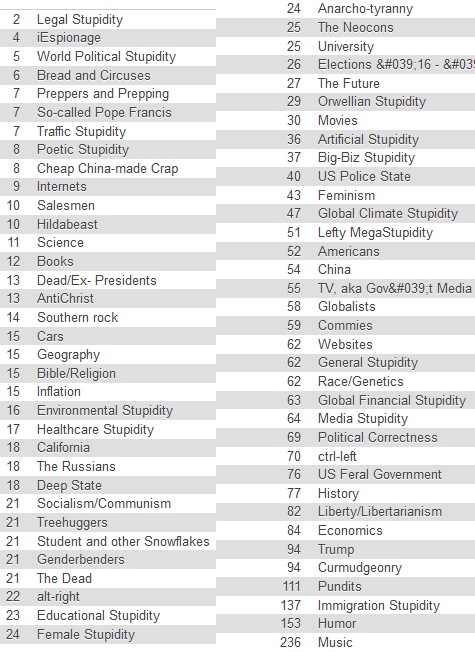 Same information, but in alphabetical order by Topic Key: 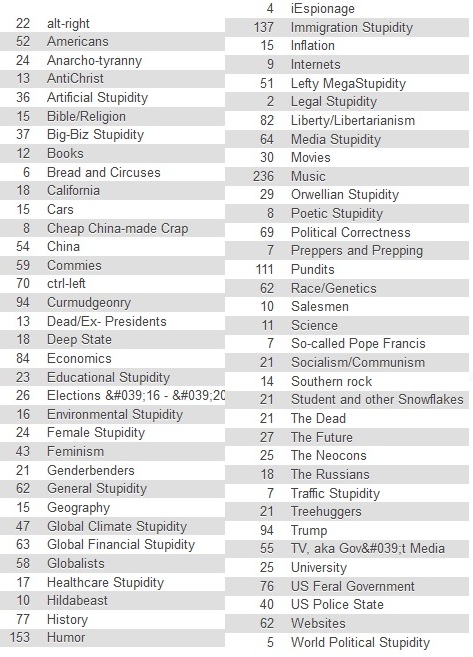 A little more about the Topic Keys: Some of the ones added fairly recently really should be attached to more posts. I'll have to go through at some point and do some adding of these keys to the appropriate posts. That brings up the fact that, without these Topic Keys, and even with them, Peak Stupidity is not very searchable. Work on the software will need to commence sometime soon, as the general bugs are getting to me, even! It's a matter of taking time off from the blog for a week or more sometime this Spring or Summer to do it.

I believe the formula of about 1/3 or so original medium/long essays, another 1/3 or so taken from other writings but not necessarily needing excerpts for the points to be made, and the last 1/3 being "hey, look what he wrote" is probably about right. That's the way it's been going, and this allows only about 5-8 posts a week, from 2 1/3 years experience now.

Please, if you, the reader, are getting impatient for new posts, I would think there'd be something to your liking in all these 1,000 posts, so go through the Topic Keys when you get bored.

I want to thank ALL the readers that I've reached, presently amounting to a few hundred site visits per day. It'd be great to have more comments. I read them all, though under older posts, it may take a few days to catch up with them. Please put "PS" (just like that, quotes not necessary) as the 1st 2 characters of your comment, as I'd hate to know that more than just an occasional few comments are getting lost. However, I explained the reason for this requirement, and it has indeed been working fine to stop spam.

To paraphrase the just-deceased George H.W. Bush, Peak Stupidity has on display here:

* Yes, there are a few topic keys that are about the more sane and intelligent matters that we run into, say the Science and Geography keys, for example

Moderator
PS: I guess I can't reply to ALL of the thousands of commenters ... haha

Thank you all for reading! Hey, I had the spelling wrong for years too, BC. I'm sure it's pronounced "new min" (to try to do it phonetically, but without any accent marks).
Dtbb
PS
1000 POINTS OF STUPIDITY. I like it. Congrats and keep up the good work.
BernCar
PS: Sorry, von Neumann, not van Neumann. That one, I did know how to spell.
BernCar
PS: My God! I have lived over half a century thinking it was "Newman". How embarrasing! But it is pronounced new-man, right? Not noi-man. like John van Neumann, the mathematician?
BernCar
PS: Congratulations and well done!