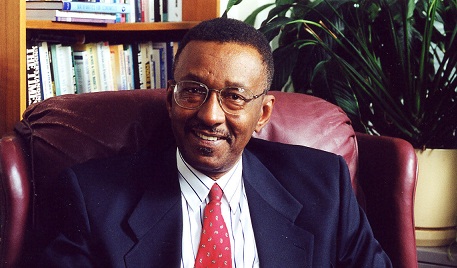 A commenter had inserted what turns out to be a complete recent Walter E. Williams column under an unz post the other day that I just want to give my AMEN! to. No, you're right, I'm not a black guy, so I may not have the privilege to go around shouting "AMEN!" However, I think the black Libertarian Walter E. Williams would forgive me on this, as I hate to say it (well no, if I did, I wouldn't), but one should easily be forgiven for thinking Mr. Williams is a card-carrying honorary white guy, from his writing.

That's pretty cynical, as there are a handful of black libertarian pundits, along with, I'm sure, a low-single-digit percentage of ordinary black libertarians too. As for the pundits, I will point the reader to the great Thomas Sowell, not just a pundit but a well-known author. (Peak Stupidity noted his retirement from punditry over 2 years back.) Then there is Larry Elder, more of a radio guy, but I'd classify him as more of a conservative than libertarian.

Though it tells the truth about a big evil of Socialism, Mr. William's column here does not get into the genetic component of black criminality, and there no doubt IS one. Is it that he'd rather not think about that, really doesn't believe it, or just doesn't want to mix things up in the column? It's true that Libertarianism does not account for the effects of millennia of evolution producing races that have VERY different likelihoods of consisting of any significant share of imaginative freedom-loving libertarians. Walter Williams puts all the blame on the > 5 decade-old American Socialist welfare state, and I can't argue with anything he wrote here:


Sometimes, during my drive to work, I listen to Clarence Maurice Mitchell IV, host of the Baltimore’s WBAL C4 radio show. Mitchell was formerly a member of Maryland’s House of Delegates and its Senate. In recent weeks, Mitchell has been talking about the terrible crime situation in Baltimore. In 2018, there were 308 homicides. So far this year, there have been 69. That’s in a 2018 population of 611,648 — down from nearly a million in 1950. The city is pinning its hopes to reduce homicides and other crime on new Police Commissioner Michael Harrison.

Another hot news item in Baltimore is the fact that Johns Hopkins University wants to hire 100 armed police officers to patrol its campuses, hospital and surrounding neighborhoods. The hospital president, Dr. Redonda Miller testified in Annapolis hearings that patients and employees are “scared when they walk home, they’re scared when they walk to their cars.”
Philadelphia’s Temple University police department is the largest university police force in the United States, with 130 campus police officers, including supervisors and detectives.

In 1957, I attended night school at Temple University. There was little or no campus police presence. I am sure that people who attended Johns Hopkins, University of Chicago, and other colleges in or adjacent to black neighborhoods during the ’40s, ’50s and earlier weren’t in an armed camp. In the nation’s largest school districts that serve predominantly black youngsters, school police outnumber, sometimes by large margins, school counseling staffs. Again, something entirely new. I attended predominantly black Philadelphia schools from 1942 to 1954. The only time we saw a policeman in school was during an assembly where we had to listen to a boring lecture on safety. Today, Philadelphia schools have hired more than 350 police officers. What has happened to get us to this point? Will hiring more police officers and new police chiefs have much of an impact on crime?

No doubt hiring more and better trained police officers will have some impact on criminal and disorderly behavior — but not much unless we create a police state. The root of the problem, particularly among black Americans, is the breakdown of the family unit where fathers are absent. In 1938, 11 percent of blacks were born to unmarried women. By 1965, that number had grown to 25 percent. Now it’s about 75 percent. Even during slavery, when marriage between blacks was illegal, a higher percentage of black children were raised by their biological mothers and fathers than today. In 1940, 86 percent of black children were born inside marriage. Today, only 35 percent of black children are born inside marriage. Having no father in the home has a serious impact. Children with no father in the home are five times more likely to be poor and commit crime, nine times more likely to drop out of school and 20 times more likely to be in prison.

Our generous welfare system, in effect, allows women to marry the government. Plus, there is shortage of marriageable black men because they’ve dropped out of school, wound up in jail and haven’t much of a future. Unfortunately, many blacks followed the advice of white liberal academics such as Johns Hopkins professor Andrew Cherlin who in the 1960s argued that “the most detrimental aspect of the absence of fathers from one-parent families is not the lack of a male presence but the lack of male income” Cherlin’s vision suggested that fathers were unimportant and if black females “married the government”; black fathers would be redundant. [Peak Stupidity's bold there, as we need to get in another AMEN!. Oops, too soon? Too white? - pardon the interruption, Ed.]

Most of today’s major problems encountered by black people have little or nothing to do with racial discrimination and a legacy of slavery. People who make those excuses are doing a grave disservice to black people. The major problems black people face are not amenable to political solutions and government anti-poverty programs. If they were, then they’d be solved by the more than $20 trillion dollars nation has spent on poverty programs since 1965. As comic strip character Pogo said, “We have met the enemy and he is us.”

Great stuff, Mr. Williams. Mr. William's own website with all his columns is here.

BTW, for both that commenter on unz and Peak Stupidity pasting in the whole column, one may worry about copyright infringement. I don't think Mr. Williams would be the type to worry about this one - and I doubt we'll do it again. I did note though, hahaha, that the sitemaster had not updated the copyright label at the bottom. Apparently it only goes through the end of 2018, so I'm good I had no idea that the new stuff was copyrighted, and that's my story, and I'm stickin' to it!

Moderator
PS: Yeah, Mr. Blanc, one can't put all the blame for black crime on broken homes, as your time at the Univ. of Chicago was before the welfare state had completely cranked up. You know more than I do, from experience, that your time there was during the most turbulent and during the start of blacks being told that white people were the cause of their problems, making it even more likely that their criminal acts be done against whites.

A lot of people have written (on unz, sbpdl, AR, etc.) that black crime was exceptional (but kept mostly within the black communities) even during the segregation era. I don't know the scale of it, and there aren't many eyewitnesses to those times left.

Nature didn't help, but then you add bad nurture and make it even worse - thanks, LBJ, we owe you one (a crack across the head with a 2x4 is what I mean by "one").
MBlanc46
PS The University of Chicago had a substantial police force by the time that I got there in the autumn of 1968. By then the neighborhoods on three sides of the university neighborhood were serious black ghetto (the fourth side is Lake Michigan). Not that it did much good. My wife and I singly and together were he victims of five crimes, including two burglaries and one attempted rape. Wherever there are blacks, there is crime.