Outsourcing of the Funny Farms

I'd mentioned a post coming on this topic, the big change in what happens to mentally ill people in America, as I wrote about the nut-ball Prime Minister of New Zealand this past weekend.

People of the Millennial generation may not even know that, until the last 3 decades, there were places for the mentally ill other than with loved ones (for the very lucky) and the streets of big and medium American cities. "Institutionalized" was the term for those that inhabited these big institutions, "funny farms", "nut houses" or much more euphemistically, "the State Hospital". They were usually sprawling complexes with many buildings, and often large edifices that like the one below (if it reminds you of anything, think of the scene in Rain Man* where Charlie Babbitt picks up his brother Raymond). 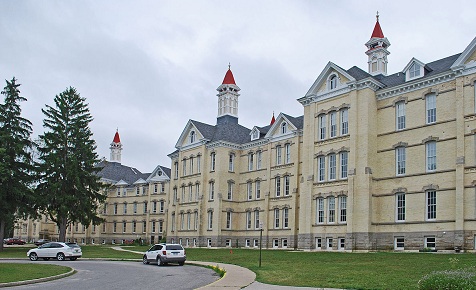 It was definitely not all fun and games at these places. I spent 2 days at a State Hospital one time (I got better!... no, I kid) for a small job. I was too young to think about the risk of violence, the darkness in the minds of the really serious cases there (most were, I'd guess), as one guy sold me hand-made leather pouch for a buck, and I thought "hey, arts & crafts, cool." I didn't yet think of all the sad things that often go on there, sometimes for good reasons and sometimes not... those drugged-up for their own good, others just to make it easier on the staff, some who probably should not have been in there, and many that were put in against their will. It's hard to decide what's best for people in these sad states of affairs, or even to decide who gets to decide.

A big difference in life then was the regular people, not just protocols and now computer software were allowed to make judgements, probably mostly wise ones, as compared to the stupidity seen now, due a lot to the fact that people AREN'T normally allowed to make big judgements. We're not supposed to judge anybody nowadays.

It may have been just the general cultural upheavals of the 1960's lingering on, and the influence of the 1975 movie One Flew over the Cookoo's Nest*, but also the hunger of state legislators for that money for spending elsewhere, that motivated the gradual closing of the funny farms. The mentally ill are still with us, however. What has slowly happened is that millions of people that should be institutionalized are now living on the streets.

That's not really big news, I guess, to anybody reading, but, again, younger people may not know how it worked previously. It may not have been the best for everyone, but are the crazy people one sees downtown better off out there on the sidewalk? I bring this up due also to a video going around called "Seattle is Dying" (I'm just linking to this 1 hour video this time.) That title of the KOMO-TV (Seattle) video could have meant a lot of things, but the big story was on the huge homeless problem and the violence and filth that goes with it. For those not living in Seattle, there's a bit of Schadenfreude to be had watching the yuppies try to explain why they don't like it.


Crazy Seattle guy from the video: 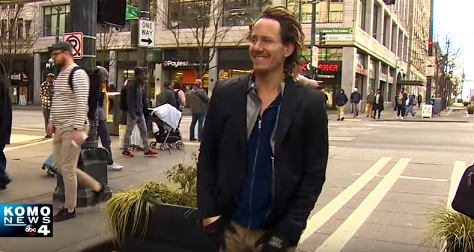 Wouldn't he be better doing arts & crafts in the nuthouse?
It'd be better for the rest of us, too.

If you get to any American big/medium city's downtown, or live there, you will probably see or have the problem, but not on the same scale as Seattle. I'll add "or as" Portland, San Francisco and Los Angeles. That is because these cities are not freezing-ass cold (Seattle and Portland can be miserable, but you're not going to die outside from staying out 1/2 an hour as in Minneapolis!), and they are not humid buggy miserable places like the Southern cities. That's where anyone who's going to stay outside, where's there's free stuff, is going to end up.

There was plenty of talk about "finding solutions", and "we need to do something, but I don't know what" in the "Seattle is Dying" video. Nobody, but NOBODY in the > 1/2 of it that I watched ever mentioned that maybe, just maybe these people should be locked up in some manner. No, not Correctional-Max, but how about the old quiet sprawling State Hospital where some could have a semblance of a life. I think the whole concept has been forgotten. The care of the mentally ill has been outsourced to some charities, but mostly to cops and city residents, who are not happy about this.

If nothing else, can we just build one funny farm, say in the nation's capital for convenience, with room for say 10,000 or so ... politicians?

Moderator
PS: On the first thing, I'd figure "more people, more crazy people", but,yes the lawyers probably had something to do with it. They ruin a lot of here-to-for decent "sectors" (haha) of polite society that depend on honorable men.
Dtbb
PS:My guess would be population growth and lawyers put state hospitals out of "business".