Part 1 of this story of the 40 year-ago mass suicide/murder of 900+ members of the "People's Temple" in Guyana, S. America ended with some comments on Communism. Let me add a little bit here. In just one look at a local (to the cult's former location in San Francisco, CA) radio station KGO 7-minute newscast made as information was slowly coming through, NOTHING is mentioned about the political beliefs and actions of this cult. I can't help but think that, along with the Geography/Climate of Mr. Jones' pick of a People's Paradise location, it was the realization the Communism, even on a local level, WITH Social Security checks coming in, was not working, that caused them to go voluntarily suicidal (a large majority of them).

I respect a group that want to do its own thing, go off the grid, start a commune, homeschool their children, etc.,, ESPECIALLY with today's oppressive Feral Gov't. Though it was a different situation in the late 1970's, this group had their beefs with the system, and were man/woman enough to follow that Kook down to South America to make a life there. The problem was their solution, or their leader's solution, was Socialism, then hard-core Communism. You can have a commune, and then learn what doesn't work, and eventually end up with a little capitalist town, once you realize the realities of life. If you stick to the stupidity, as most communes did back in the day, you either end up closing down, with all going safely home to REAL JOBS, or you get unbearable misery and then trouble. Other than its remoteness, the location that Mr. Jones picked was not really ideal. I guess he was never in real estate, as it's all about LOCATION, LOCATION, LOCATION, even if you're a Communist. 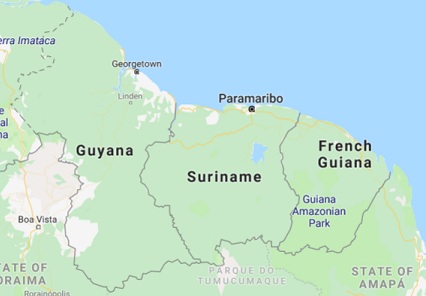 Guyana, Surinam, and French Guiana were colonies of Great Britain, Holland (the Netherlands), and France, respectively. In the same order, they became independent in 1966, 1975, and never (as French Guiana is not a colony now, but still a "department" of France). No, independence does not help these people much, except for their collective self-esteem. Well, let me tell you, these place are "out there, man!", as they would have said in that era. Ask an American who's traveled even out of the country a bit if he's heard of any of these 3. I think people would know more country and city names in Africa and the Middle East than in this hole of the world. The capitals, as in most of Central and South America, contain a large portion of the population (even in Chile it's 1/3). Georgetown, Guiana has 1/4 million, Paramaribo** has 225,000, and Cayenne, Fr. Guiana has 60,000 or so. Look on Bing maps aerial view, zoom in, and you'll see that none of these capitals look very modern, and that's with things looking better from the air, in general.

Now, that could be a good thing, or at least that was MY thought, about 35 years after this happening. What a great bug-out place! Nobody knows these countries, the US military doesn't even mess with them, and, though not as far as countries in Asia (which could be a good thing), you don't hear about them. (OK, one exception is the city of Kourou, where the Euro Space Agency Aerospatiale launches rockets, due to it's closeness, 300 miles, from the equator, meaning a higher initial speed.) So, is this the place for the Preppers? Nope, I checked these 3 out as best as I could without going there. The demographics of these places are, let us say, ... unsound. Sorry. Uruguay is the best bet down there.

These 3 countries are all within 6 degrees of the equator. I suppose Jim Jones had jungle fever, but not in the Spike Lee movie sense. His jungle followers including the black ladies, were a large part older people, but as leader of the cult, he would still have his pick of the younger unmarried(?) women. Even under Communism, or especially under Communism, it's from each according to (how she looks in) her jeans, and from each according to his virility.. Mr. Jones chose his location for remoteness along with political deals with the Guyanan government, which was Socialist enough for his liking. It probably helped that the official language of the country is English (from its British past), though most speak Creole (meaning hodgepodge, basically). Bribes were easier this way, as with Communism AND Latin America, yeah, there's gonna be bribery. After 3 years or so of negotiations, bribery, and planning, Jones and a several hundred followers moved down to what was built into Jonestown in the summer of 1977.


Close up of northwestern Guyana:
Jonestown was about 2/3 of the way from Port Kaituma to Matthew's Ridge. 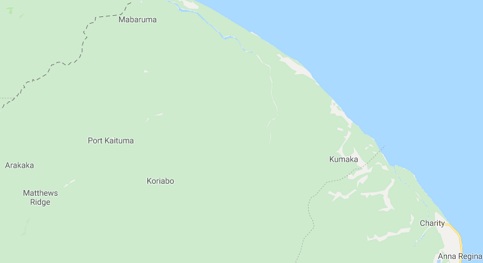 For scale here, the distance from Port Kaituma to Matthew's Ridge is ~ 10 miles.

Close up of the jungle with Jonestown having been at that clearing: 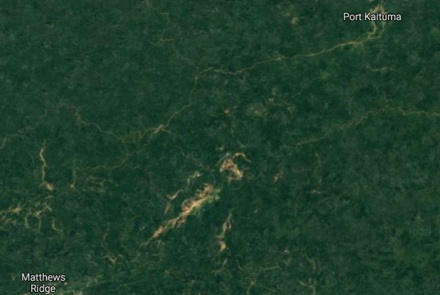 It looks like the jungle is taking back the place. Good.

Imagine the change in the climate from the nice temperate climate of San Francisco to that of the jungle of Guyana. San Francisco does have the marine layer of low clouds or fog lots of mornings, even into the summer. However, once that sun shines through, the air is crisp and just about the perfect temperature. Fog notwithstanding, on the nice days, San Francisco is not that humid at all compared to anywhere in the American east coast right up to the edge of the plains. You get those cool nights down into the low 60's, even high 50's, while in the Deep South in this country (not to mention the jungle of Guyana) it never gets cool at night, from mid-May through mid-September. Georgetown at least has the sea breeze, so hangs between 80-85F as highs and low-mid 70's at night. In Jonestown, the temps are not as terrible as I would have thought,but without the breeze and with sweltering humidity and the skeeters that go with it, it had to be a big nasty change for all those Californians. Communism is miserable even in the best locations. In general, it's not the heat, though, it's the stupidity.

OK, readers, I spent too much time on Geography/Climate, cause I like that stuff. Peak Stupidity has run out the clock again, and there will need to be a Part 3, and maybe even 4 (the latter about the media, including some interesting vids.) There'll be more on that mass craziness on Monday. Though you could just read Wikipedia, I hope you like Peak Stupidity's take or slant on this long-ago-now bout of suicidal stupidity.

* I HATE HATE HATE maps without a scale - Google maps has no scale, and I couldn't turn one on for the life of me. Bing maps have scales. Go Bing!


** See? See? Has anyone you know EVER HEARD of Paramaribo? That sounds enticing.

Moderator
PS: Yeah, I thought of that line long ago, but I think it's my first use of it on this blog.

It's usually the kind of line you think about on the way home, when it's too late to use it, George Castanza-like.
BernCar
PS: "...it's not the heat,...it's the stupidity." That's inspired. I'd "borrow" that, but I don't think any of my acquaintances would get it.