It's like this, but without the itemization, calculator and stethoscope: 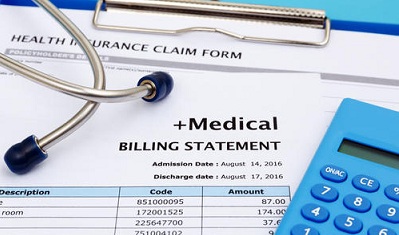 Let me back on up here. The 1st incident of the healthcare billing via rectal extraction was in a way even more vexing, due to the monetary amount, yet more benign-seeming afterwards. We made a deal with a hospital for delivery of a baby (not the Doc's fees, mind you, but just the delivery room, baby and Mom care for 2 days, etc) for over $3,000 to be paid ahead of time. We paid them. Our kid was born, we stayed till the last coupla' hours, and we went home. Deal? Deal!

Two weeks later a bill for also about an order-of-magnitude higher - as I recall, about $23,000 dollars itemized to the penny - came in the mail. OK, that was about 7 X, plus we'd already paid that first amount. I was beyond livid, thinking that these jokers had me believing the whole thing was 3,000-odd bucks, but maybe I'd missed some fine print! This stuff WAS itemized, including all the stuff that was supposedly already paid for before the birth. I had some very bad thoughts at this point, involving burning shit down and so forth. My anger was enough to where I simply tried to forget the whole thing for about a week. Then, I went as far as to get a friend to record a conversation with them with questions about this deal of theirs, as if his wife were about to have a baby too. The deal they told him was exactly as it was explained to me. Then I called the people finally.

"Oh, no, you can forget that bill. The computer just sends that automatically." Fuckin' bloody hell, lady - you call yourselves "health professionals" and you then piss people off enough to be in the mood to come to the office and beat the shit of your whole group?! How's that on the diastolic pressure, bitches? What is wrong with people? I don't care what a computer did, someone made or let it do that. Please see Send in your payment - STAT! (more doctor stories) for a story of my chewing out a Radiologist, at his hospital, on the phone. Yes, I'm dating myself, as that was back when you could get a live person on the other end of a phone and, indeed, figuratively rip him a new one. It didn't even involve false billing, but just a nasty bill that was not warranted, seeing as how it was the first one from the guy.

Now, back to the current case, 1st letter, that 12 large or so was just told to me upon my call-back to be what I owed them, period, no explanation necessary. "We'll discuss your case in a meeting" I was told near the end of the conversation. "No, there's nothing to discuss. I paid my bill that day, beforehand, and I don't owe anything!" See, same thing: I was afraid there'd been some fine print that the nice lady a few weeks back made an effort not to tell me about.

Well, come the 2nd letter, saying that my charity case (WTF?!) had been turned down, so sorry, I was even more angry on the phone. The lady was pretty obstinate about the whole rectally-extracted amount of money and the "Fuck you, pay me!" bit. That's what brought out the L-word. As I explained that possibly a lawyer would be necessary to sort this out, things quickly morphed somehow into a whole different conversation. "Oh, that amount is an auto-generated thing." "What do you mean? I'm not paying any money!" "Oh, no sir, it was just auto-generated - you don't need to pay that."

First of all, is that going to be the new "dog ate my homework" excuse for the 21st century (as dogs really can't eat our auto-generated homework anymore)? "No, no, sorry, you got upset, that big-ass bill was just auto-generated." "No, sir, I know you were told that you owed $50,000 for the neurologist, proctologist, endocrinologist, and 2 aspirin that showed up while you were sleeping* and are slightly upset about this sudden charge. It was just auto-generated, so calm the fuck down, Sir."

OK, finally, as to my suspicions of a real scam here, I thought later: Now wait, do they just associate with hospitals and doctors' offices, rectally-extract** a large number, "auto-generate" a letter, and then just hope that they fool 1 in 10, even just 1 in 50 patients? "Oh, I'd better get on the payment plan" (for this number that came from I-don't-know-where). People are indeed scared to have their credit ratings lowered, as they live on debt now. "Oh, yeah, we can probably do $150/month, though it may go up slightly next year. It'll be OK, Sir."

Possibly a big fraction of recipients of these auto-generations just throw out the mail, possibly lose some sleep, and just figure they don't want to hear about it. Others call up and raise hell. When things get nasty and the L-word comes up, handling of this is a simple as "oh, you can ignore this letter. No, it was just auto-generated." Now, the recipient is so damn glad, he thanks the scammer profusely on the phone, throws out this paperwork, has a few beers to celebrate his relief, and never thinks anymore of it.

It's good work if you can get it. Some of us may investigate some more. I happen to know the Doctor well and I remain pissed off, though at a much lower intensity. I really want to know who caused this computer somewhere to send me a letter saying I owe 12 grand. That's the guy I'm looking for.

* Again, please read that - humorous, I promise you - other Doctor post.

Moderator
PS: I didn't really know whether these MFers were associated with the medical center at all, Dtbb. My doctor friend says he HAS heard of them. I don't know who they work for, and what they are really up to.

One thing you can always do, even if you do end up on the hook: Just send them in $2 monthly (the check is about 35 cents now, and the stamp 50 cents, so I picked a number that sort of works for everybody, haha). My friend said they really can't start any collection action (like I really give a crap) if you keep sending in even the smallest amount monthly.
Dtbb
PS:Oh I could tell you some stories. It's all a scam and who cares about the patient. I caught MRSA at my local hospital and got them to rule me a charity case by threatening them with the L word. I still should have sued. Why 11 people in an office with 1 doctor. Never can get an answer. Once a week I read about some Indian doctor is getting busted for fraud around here. It is all so tiresome.