Congresscritter Ilhan Omar and the concept of Unmitigated Gall

Firstly, in case the reader may (probably not!) be put off by the use of the term "Congresscritter" with respect to the raghead out of Minnegadishu, keep in mind that Peak Stupidity often uses that term for 95% of the creatures that infest the nation's Capitol (only the bad ones, that is). "Raghead" is another story. 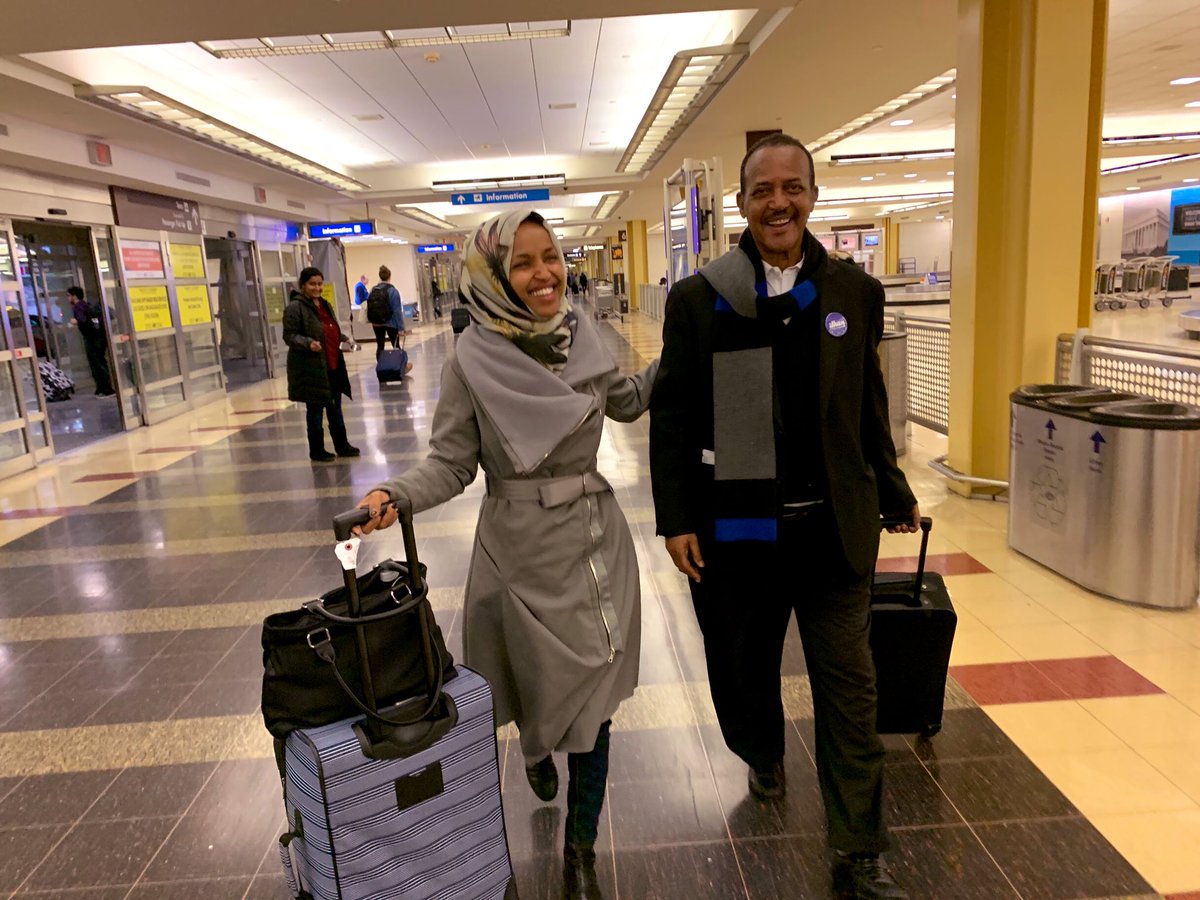 The excellent writer that goes by the handle "Washington Watcher" has a very good editorial up on VDare, Roll Over, Jay Nordlinger! Ilhan Omar Is NOT “Classically American.” And She Never Will Be. Jay Nordlinger is just a member of Conservatism, Inc, and the words about him and his ilk are included just to demonstrate that these goings-on make them all look utterly foolish. He's not the main point of the article, one in which I implore the reader to go to now and read through - take your blood-pressure medication first, or as prescribed by your primary care physician ... No, Tucker Carlson is out there, one of the very few somehow not yet having been booted off the Lyin' Press Video Department yet, saying what almost all real, patriotic Americans know, but don't even say themselves unless they've looked over both shoulders first.

If you like viewing over reading, here is Tucker Carlson, with only from ~4:00 (you could start at 04:15 in) being about this ungrateful bitch of an elected official. If you are going to view this, Peak Stupidity will put our disclaimer in first - we are IN NO WAY in favor of this merit-based immigration plan to begin with* - it will just give greater priority to the H-1B software-guy/engineer replacement scam over the illegal-alien roofer/cook replacement scam.

More from Tucker on Omar from another piece by him:

It's like this with the Omar broad: Does anyone remember the John Birch Society? They were staunchly anti-Communist, regarding both foreign and domestic policy, because THAT'S WHO THE ENEMY WAS. Well, nowadays we are letting the enemies right on into our country, and the statements out of actual members of Congress would make the members of the John Birch Society lose all their business, as these people are proving their point daily out in the open. They don't work in secret anymore, to where there's a reason to form an organization to weed them out. The enemy is right in front of us!

You make it from poor 9 y/o refugee in 1993, dragging ass from Kenya through Dulles Airport, to a nice existence in the great white north in Minnesota, even getting to marry your brother along the way, to one of 454 members of the legislative branch of the US Feral Government. All that, and you HATE HATE HATE your countrymen and want to take if from the white people who built it. No, not take it back, as your country is the shithole called Somalia. You want to fuck up this land out of what, homesickness? Couldn't we send you on a 30-year fact-finding tour at taxpayer's expense. (Yeah, I balk at some of this stuff, but I'm down for something like this.)

Let me ask this ungrateful bitch this: Would Somalians** take in a poor white girl and treat her like one of her own, and then elect her to high office? To ask the question is to choke on one's lunch in hilarity, so be careful. I wrote this before, but the gall of this lady is not the kind of gall you can get at the Family Dollar. This stuff is UNMITIGATED, here ya go:

un·mit·i·gat·ed  (ŭn-mĭt′ĭ-gā′tĭd) adj.
1. Not diminished or moderated in intensity or severity; unrelieved.
2. Without qualification or exception; absolute.

Yep, it's some mighty INTENSE gall here, just exceptional. See, it's not really that I want to see these refugee immigrants kiss the ground in happiness, thank us profusely every time we get on an airplane - "thank you for your service the invite", or write nice editorials about the Americans who treated them nicely, if not with some trepidation, but at least with respect. I just don't want them to come here, period.

Notice I never called this raghead Omar stupid. She is here, in Congress some days, working very hard on behalf of the people of Somalia. What else would you expect? No, I've got words for the nice, calm and collected, people of Minnesota instead: You STUPID, STUPID, STUPID PEOPLE! Why did you invite 100's of thousands of the most un-assimilable most-foreign people on God's green Earth into your state?! Are you people just nuts!?

Yeah, I know, we have our idiot Senators where I live too, and we (not me personally, mind you) have let in loads of Mexicans and Guatemalans. Yes, they will change the whole nature of society, due to the large numbers. Yes, they are a drain on the economy when welfare externalities are taken into account. Yes, they vote (see this very article) for more Socialism and gun control in big numbers. However, other than the La Raza types out in the West who say they want a part of their country back (guess what? You got it already!), they are not political in the way of these Somalians. They tend to want white people to keep running things, as that's pretty much what they wre used to back home. They are not particularly ungrateful, from my experience.

Yet, you Minnesotans have INVITED these people? Now that's some UNMITIGATED stupidity there.

Just a little more on this Congresscritter Omar: As Steve Sailer has written of, this very lady HERSELF entered the US as a refugee due to her grandfather's status as a warlord, back in "the old country". Now she is a big gun-control proponent in the US Congress. Is that just due to guilt over how many 10's of thousands of people her Grandaddy had killed? Of course, she has, or pretends to have, no clue on the reason for the 2nd Amendment, that she swore on the Koran to uphold. Nope, the reason for the lies on this, is that, as she tweeted, she would like to replace the white people of America, and that can't be done so easily if they are still armed.

Ilhan Omar would do much more good with these policies in her old country? Do they still have exchange programs for legislators? Perhaps Ilhan Omar could go to Somalia and run a gun control program there, in exchange for a goat in her seat, who would probably vote in the manner of Dr. Ron Paul. "All opposed?" "Baaaa!"

* This very same writer, Washington Watcher, has a good summary of the pros and cons of the Kushner plan, also on VDare, of course, in Kushner’s Immigration Plan: Not A Gang Of Eight Catastrophe—But Still An Assault On Middle Class, Historic American Nation

** Yeah, I do know the term is "Somali", but I don't like that term, and just like Burma and Peking, that's the way I write it.

Moderator
PS: I've not read much of Z-man's blog (nothing against him, BTW), BC, but that sounds like the goodwhite/badwhite theme that John Derbyshire (I think) introduced. Maybe he got it from the Z-man(?).

My "STUPID, STUPID, STUPID" was not as much about the election of this raghead, although, sure, that's stupid, but more about the stupidity of purposefully inviting Somalians into their state by the thousands. That's the Lutheran and other church organizations that not only sponsor these "refugees" out of the goodness and virtual-signaling of their hearts, but due to the ability to make a lot of money at it. No, it's not just Minnesota, but they seem to be at the heart of this.

I really liked Jesse Ventura, BernCar. Kudos to the Minnesotas for voting for him, but if you look at who DIDN'T vote for him, that leaves a whole lot of STUPID people. BTW, that governor Dayton, of Target stores, was a real cuck when it comes to this immigration stupidity, or maybe still is.

Anyway, I think you've got the attitude of these Good Thinkers or GoodWhites down pat. I still call it stupidity, because, in the long run, as Peter Brimelow says, "this can only end in tears."
BernCar
PS: You bring up a good point about the people of Minnesota voting her into office. Someone (zman.com blog?) speculated that the real struggle is not between "Heritage Americans" (sorry) and immigrants; it's really between two camps of HA's--traditional vs the idiots who vote those immigrants into office (or, same thing, support the importing of hordes of ungrateful immigrants who vote other ungrateful immigrants into office). What are they thinking, the Good Thinkers? It's almost like they're doing it to with the other camp of HA's in mind. You know, to show they're not like those crude crackers. Even so, despite the name of our host's blog, these Minnesotans can't be that stupid. Can they? Hell, they voted Jesse Ventura into office. That shows some level of common sense, doesn't it?