The Softer Noisier Side of Sears

The Big-Biz Stupidity side of Sears 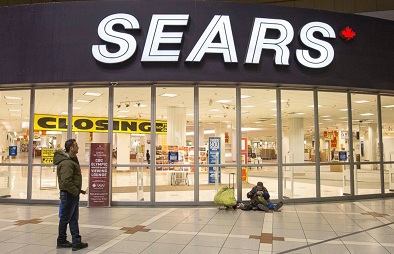 (We came in through the back side, three times!)


As I wrote in my controversial* post on the BCE/CE business, though I was very surprised at myself to have not written that post in 2.5 years, it's a wash, as I already wrote the inflation-in-the-'90's post that the substitution/hedonics posts were to be precursors to. It's one thing to repeat myself, as much as I try not to repeat main points over and over. It's another thing to do it by accident! It's that CRS syndrome that I've been prone to, known by the MD specialists as Can't Remember Shit.

Anyway, the reader is referred to the early-October-'18 post Inflation and Chinese Imports and Exports if he would like to read Peak Stupidity's experience with the ACTUAL low-inflationary times of the mid-late 1990's.

Since I'm on the topic, I will relate this (mentioned long ago - in the footnote) story on the Cheap China-made exercise bike from, apparently, the softer higher-wear side of Sears. This is about anti-friction bearings in that otherwise very solid machine.

We paid close to 300 big ones for an exercise bike, and this was long enough ago to when Sears was still doing OK, as I recall, meaning quite a while ago. This machine we bought was not one with the fancy electronics that don't calculate power and energy right (dammit, another curmudgeonry post coming on that shit!). It was/is solid mechanically with a very small display panel - no TVs and internet, etc. - and no sensors but the magnet/proximity sensor type just to get rotational speed for all calculations.

What could go wrong? After about 2 weeks of use for 1/2 to 1 hour per day, the crank bearings started grinding. Upon getting at them, I saw they were just the same cheesy ball bearings with a sheet-metal cage, no outer and inner races but the housing and crank itself, respectively, like a cheap-ass China-made actual bicycle. I remember we didn't disassemble the machine, but just loaded it up and went to the back entrance to Sears for an exchange (it's not like I knew of another with guaranteed higher quality).

We brought the 2nd one home, I spent about 1 hour in assembly time, as it went quicker, and we started exercising. We used this thing for a month before ... yeah, the same bearings were grinding. ONWARD TO THE SEARS LOADING DOCK, AGAIN ... I can't recall, but I'm sure I'd have made some remarks about their business plan and the fact that I'd come back as many times as I had to. We brought this 3rd one home, and I assembled it with ease, as I am really good at that now! I think I didn't HAVE to look at this part, but I noticed one amazing thing: The cheap-ass crank bearings of the 1st 2 machines had been changed out with a nice solid Koyo or other precision-manufactured ball bearings with nice races and dust shielding.

Wow! Was it my remarks on the Sears website? I doubt they could make a change-out in design that quickly. No, probably people put the effort into bringing these $300 exercise bikes back enough times until some executive somewhere got the hint: "Hey, wait, we are selling 2.375 machines per customer, and then we had to build this whole facility in China to change out bearings. We can't make money this way. We may have to start using quality parts, but, but, then people might thing we're Japanese!"

I was very pleased by this, whatever actually caused someone to get off his ass and fix the problem. Those bearings have not been grinding ever since we got the 3rd machine. There've been some problems with the pedals ....

* Well, it got 2 non-agreeing comments, so that's a controversy here at Peak Stupidity! ;-}

It can go both ways, with the on-line vs. actual stores. For clothes and other items, sometimes it's better to go to the physical store to check out things, and then go on-line to buy them, depending on shipping and tax in addition to price (it seems like tax is added to most items on-line now ... they've caught up, dang it!). Yes, the reviews are great too. I think mine was not the only review on the bearings.

Sometimes, when there's not very many reviews, on other sites than amazon, I really wonder how many are ringers. Some people get really pissed off and want to get their extra digs in, but more likely there are those selling items (especially on ebay) who game the system, either with lots of reviews under different names, or even very small purchases by friends to get their "stars" up. My friend ran into a crooked car dealer, selling a real POS, and we spent a whole day to go see it. I told him that many of the good-buy ratings could have been friends or more accounts of his own. (If you can rip off one guy by $10,000 by selling a piece of crap, I guess that effort is all worth it for him ... ;-{ )
BernCar
PS: For all the problems that have befallen local merchants because of on-line marketing by Amazon and others, one big advantage has been the ease of researching products before purchase. The review system on Amazon has led me to avoid purchases of items like the exercise bike with bad bearings. It's also a good way to educate oneself--before buying some speakers a while back, I learned as much by reading reviews as I did in a signal processing course.

And just to amend the record, I did not mean to throw shade on your take on the BC vs BCE issue. It just doesn't set me off nearly as much as other things in the prevailing narrative, but I certainly understand your bristling at the change.