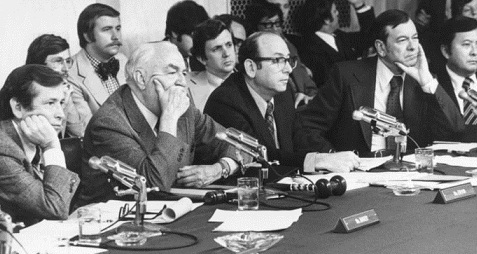 This is another case of Peak Stupidity being beaten to the punch "by that much" by a fellow pundit, in this case Pat Buchanan. Perhaps it was the statement (1st line of Mr. Bucahan's column) “History is repeating itself, and with a vengeance, ..." out of John Dean to the Judiciary Committee - yes, THAT John Dean - which brought up a comparison of Nixon's Watergate to this on-going Russiangate (geeze, Pat!) involving President Trump. I did not see any of this new bit Pat writes about in "Russiagate Is No Watergate", but had just read something about this same-old-same-old John Dean in a blog comment.

No, I can't prove that I thought of this post 2 nights ago, but I'll just state here that I saved the pictures shown here yesterday morning. Nice job beating me out of the gate, Pat. We will dub this "punditgate" but no hard feelings are held toward one of Peak Stupidity's favorites - see here, here, and here, for starters.

Before I get to any discussion of President Nixon, let me state that there is no love lost between Peak Stupidity and that man. Between taking the country all the way off sound money, causing the ensuing decade of high inflation, implementing Affirmative Action, and picking unsound choices for the Supreme Court, he did his fair share in ruining America. What he did do, though, was bring American soldiers, sailors, and airmen back home from Vietnam. The left didn't seem to have any gratitude about that, perhaps because Nixon had tried to knock the Commies so hard that they wouldn't be able to turn the whole place Communist. He was prevented by the left from ending the war in that way, and the South Vietnamese people suffered the consequences for years.

Back to the subject now, Pat Buchanan starts off the comparison of the last few years media infotainment stupidity on "THE RUSSIANS!" to that more civil, and maybe slightly more honest time of almost 5 decades ago in Washington, (Pat is a little be stuck in that era himself), by bringing up the actual Watergate Hotel burglary itself. It HAS been a long time, so for younger readers, that term comes from the hotel in which some Nixon operative broke in to look at file, and maybe to take stuff out, or who knows, put stuff in. Yes, that's a crime. Contrary to Mr. Buchanan's view that this and the cover-up thereof, is what makes Watergate a bigger deal, we all know that this is petty crime compared to what goes on daily in Washington, F.S. It does not compare to the daily occurrences of bombing factories or sending cruise missiles into cities in the Middle East just to deflect attention or the daily abuses of the US Constitution done by Federal Agencies. Really, the only reason President Trump may be less guilty of this kind of thing than other Presidents over the last 3 decades is that most of his subordinates don't work FOR him anyway. They wouldn't do petty crime for him, as their agenda is being implemented no matter what Trump wants.

On the cover-up bit, if President Nixon hadn't covered up the shenanigans, the media of the day would have just come straight at him anyway. His paranoia was part of the problem, but, as Mr. Buchanan writes, he did have the media against him more than is possible in this day of tweets, youtube, and 1000 channels of TV.

During Watergate, Nixon had little support in a city where the elites, the press, the Democratic Congress and the liberal bureaucracy labored in earnest to destroy him. Nixon had few of what Pat Moynihan called “second and third echelons of advocacy.”

Contrast this with Trump, a massive presence on social media, whose tweets, daily interactions with the national press and rallies keep his enemies constantly responding to his attacks rather than making their case.

Trump interrupts their storytelling. And behind Trump is a host of defenders at Fox News and some of the top radio talk show hosts in America.

There are pro-Trump websites that did not exist in Nixon’s time, home to populist and conservative columnists and commentators full of fight.

Leftists may still dominate mainstream media. But their unconcealed hatred of Trump and the one-sided character of their coverage has cost them much of the credibility they had half a century ago.

I have no disagreement - I just meant to write this first! Pat Buchanan has been around politics for more than half a century. As for me, I was too young to appreciate (as if anybody did) those Watergate hearings that went on seemingly all summer, every summer, on the black & white TV (would it have been better in color? Nah!). During this latest Russia-collusion business, with the exception of a time or two, I have made no effort to follow this infotainment. I don't know the players involved, I don't care, and I just wish President Trump would hire a trusted lawyer or two to handle it, and pick up my attitude.

With that caveat, let me make my observations now. It's not that Nixon's petty crime was proven, compared to the 3-year-long unsuccessful witch hunt against Trump, that caused his downfall. It was minor stuff, the kind Ronald Reagan brushed off in a year or so. It was that full control of the narrative by a vindictive Lyin' Press that beat on Nixon so hard. This was their heyday, this time of all-day-long hear hearings on the only 3 channels of entertainment people could watch. The ctrl-left is frustrated by their tireless efforts to reproduce another "Watergate", their way of getting around the Presidential election process, after trying all the others.

It worked for their granddads and those revered Woodward & Bernstein guys. Why shouldn't it work now? "We are letting them down. It worked for them in the '70's. We use the same chants. We've got our people in place in the bureaucracy. We dragged out John Dean, no worse for the wear and tear, out of the nursing home, for cryin' out loud. This should work, dammit!"

Well, I'm here to tell you, that it IS working. They don't need to impeach anybody. There's just this guy who's very easily distracted, and distracting the President may not feel as good to you ctrl-lefties as seeing him wave goodbye with a tear in his eye from Marine One, but it's got the same effect. Nothing will get done. For Nixon, that was pretty much an OK thing anyway. For the man we knew of as Candidate Trump, it's very bad. 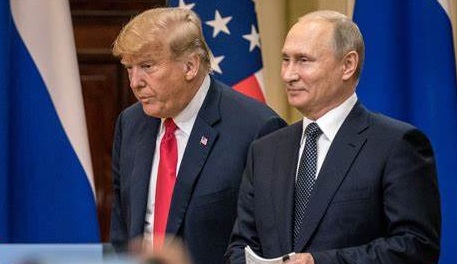 If nothing else, after the 2nd round of this take-down-the-President crap, could we at least get rid of this "-gate" terminology? (Pat Buchanan, you're no help whatsoever here.) You had your "Watergate", OK, named after the site of the break-in, then for cutesies and lack of originality there was (OK, could have been) Charles Manson&Sharon Tate-Gate, your Contra-Gate (literally "against the gate"), and your ClimateGate. After a dozen more hoaxes or so like that of Jussie Smollett and the Oberlin College Bakery Deal*, we'll likely hear of Climate-of-Hate-Gate. We could really use a Two-Day-Late-Airborne-Freight-in-a-Broken-Crate-Gate. (Dr. Seuss, you were born too early.) Heck, Peak Stupidity, after those few semi-inadvertent inclusions of skimpily-clad girls on blog posts (here, here, and here), may be responsible for Masturbate-Gate.

Peak Stupidity would be a good time in which to put the kibosh on this worn-out non-descriptive term ... end it, Checkmate-Gate.