Vintage Photo - signing of the Damnation of America 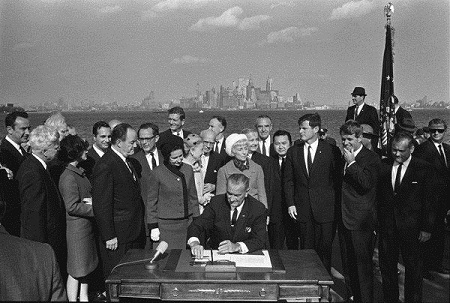 (One could not put as simple a picture and date up for the other cause of America's ruination, the Welfare State. It was more of a boiling frog deal...)

The picture above happened to be on top of a VDare post today with a reader's letter. (The letters are usually pretty good.)

Peak Stupidity needs a disclaimer first, to explain why that picture was the beginning of the end. As I wrote near the top of the Nov. '17 post Immigration invasion, assimilation, and refugees, some of my best friend have been, and still are, immigrants. That there is not a joke. It's just that all of them had been the kinds of people to want to become Americans, and really had not much choice in the matter, as it was an earlier time, with lower numbers. Assimilation does not happen with large numbers.

Just look at that beautiful day in New York harbor, with that stupid bastard Johnson, and then Ted Kennedy looking on like an idiot. Was that another Kennedy to his left that had not yet done something stupid and killed himself yet? Then, who were the men there behind it all. Did they really know what they were doing? Evil or stupid, the end is the same.

On the pos side John Mayer is really good. He has Garcia’s gift for melody, and may even (gasp) be better technically
Moderator
PS: Yeah, I listened to your tune on the iSteve thread and just now noticed your comment here, Ganderson. I liked it at first listen!

What were the annoying things about the hard-core Deadheads? I always enjoyed the people, but that was a long time back.
Ganderson
PS posted in response to Sailer's thread about nooses:

"I'm lost, I'm a frayed rope
tying down a leaky boat
To the roof of a car on the road in the dark
And it's snowing...
Ganderson
PS Evil indeed. None of these people ever had to live with the consequences.

OT, Achmed, Caught Dead and Co shows at Wrigley and Gillette the last two weekends- tons of fun, both of them. The hard core Deadheads have not gotten any less annoying, though.

Here's a tune from a very underrated band from the Great White North: the Weakerthans.