Suspicious Stupidity at the Gas Pump 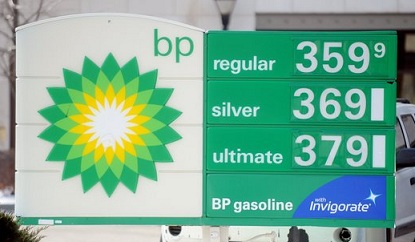 BP was the brand of gas at one of the two local stations that is up to no good, so I don't mind putting that picture up. Peak Stupidity has written a 2 part series (Part 1 and Part 2) on the long-term changes in gasoline prices, associated with our Inflation topic key. Gasoline is a volatile product in both the literal and figurative sense. It can be a wild ride, keeping up with that, and there may often be some kind of big-time geopolitical scams behind some of it. However, what bugs me is simply getting scammed at the pump, whether intentional or due to stupidity of some sort.

I'd mentioned the problems with employees who neither care about honoring prices nor often have an easy way to deal straight with the customer, in a post yesterday. Here are 2 incidents that made me lately realize that:

a) Most people obviously don't run the numbers, or don't care if they do (I think the former).

b) Big-Biz and their local minions must feel they can get away with more now.

At a BP station, I paid inside the station to get the cash/debit price. It turned I that I got very close to an even 10 gallons, so the calculation of what price the pump gave me was easy. It did not match even the higher credit price. I went inside to talk to the guy, and he told me that "yes, you got the price on the sign." I had not, though, but there was no way I could show the guy, as he wasn't going outside to look at the numbers on the pump, as he was the only employee in there.

Yeah, you can try to get a phone number of a manager, come back to show him (in the latter case it'd been easier to prove), but, well, ""You need to know how to pick your battles.", I've been told. I just make a mental note to never come back.

Is this part of a slide into 3rd-Worldliness, or is it just my becoming better at arithmetic and noticing?

Moderator
PS: Great attitude, Bill. I wish I could say completely the same, but when I find myself in a nest of Commies (such as the threads/writers on unz.com) I just can't take it.

Yeah, I will write that post soon on my opinion on price gouging during, or in the aftermath of, hurricanes, etc. My opinion would sound heartless, but then sound economics is heartless, I guess.
Bill H
PS Oh, I'll keep reading. What do you think I am? Some sort of liberal, or progressive, or whatever name they go by today? No, I do not block, or ban, those with opinions different than mine. I thrive on opinions different than mine. Someone says they disagree and my face lights up, because it means there can be a discussion.

Liberals/progressives quit reading when the writer does not reinforce his existing viewpoint. I'm not one of those.

Anyway, California has a law against "profiteering," namely raising prices merely because you can during a natural disaster, but it is perfectly okay with raising gasoline prices when a refinery shuts down.
Moderator
PS: The law of supply and demand is immutable, but that doesn't stop various governments from screwing up the market. California is perhaps the most egregious example, Bill, including the enviro-stuff regarding gasoline. First its MTBE is good, then it's bad, put tanks in the ground, take 'em out ...

I agree that many times the real reason for "shortages" are not your simple laws of economics. Oil is such a big market and Big-Biz/Government politics are unfortunately involved.

Bill, you reminded me that for the last 2 years I've been meaning to sometime write a post about the C.A.R.B. the scourge of the business world (well ONE scourge), that unfortunately effects the whole rest of the US with its BS.

On your last paragraph, let me explain: when supply goes down, of course suppliers can get more for their product, just as they have to lower prices to compete when the business is flush with their product (or service). You can call it profiteering, but that term should not be thought of as disparaging. Now you brought up a post in my mind about price gouging, something which I have absolutely no problem with, as it encourages people to be more responsible and prepared in the future - your probably NOT gonna like that one, but I hope you still keep reading.

Thanks for writing in, Bill H.
Bill H.
PS Okay, perfect opening for the meme in California where the price of gas goes up and down based on "shortages" and "oversupply" due to the utterly bogus "law of supply and demand."

A shortage of gas does not in any way justify, let alone require a raise in the price of gas. The only thing that does that is a rise in the cost of production, which is never used as justification. It is always claimed to be due to a shortage.

What a shortage does do is allow a rise in the price of gas because people become more desperate and are willing to pay more. It's true name is not the "law of supply and demand." It's true name is "profiteering."