On the way to the Moon - 5 decades ago today

It was not the day of the first Americans to go toward the moon, as the 3 astronauts of the Apollo 8 mission had gone to the moon and orbited at Christmas time, 1968 (7 months earlier). It was the first mission to LAND human beings on another world. 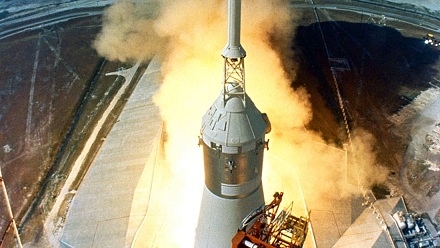 It was 50 years ago today! Just about anyone you would have asked at the time, not particularly just stoned-out hippies or members of a cult, would have told you that man would have explored the Solar System by 50 years hence, but more likely, headed out to Alpha Centauri, or some other solar system well before the year 2019.

The whole thing is just sad, and what's worse, I don't even hear much in the way of reminiscences. Should I watch TV for a few days? Nah.

What happened? How could the biggest economic and technological power ever seen in the world till then, have given it all up? We had a dream! Actually, that was the problem. Americans already had a dream before that bullshit out of some fake Commie "Reverend". The Socialists, Feminists, Race Hustlers, and later Globalists, Neocons, and the like had their own dreams though. These led us to nothing more than a Peak in Stupidity and not even farther from this planet than a few tenths of a percent of the distance that those 99% white-male engineers and technicians sent 12 brave Americans a half-century ago from today, using, BTW, electronics that an old Nokia brick phone would put to shame.

There's a near full moon up tonight. Look at it for a bit and think of the dreams of those half-century ago united Americans of all walks of life. Imagine that thrill of knowing of those billions of man-hours (yes, MAN-hours) of engineering work and highly-technical construction coming to fruition that July morning in Florida, as Neil Armstrong, Buzz Aldrin, and Mike Collins sat at the top of the 7 3/4 MILLION pound total thrust* Saturn V rocket.

Imagine how America and Americans could have changed the future for mankind, had we not been diverted off course by the thrusters of the ctrl-left, starting just before the time of that amazing mission 50 summers ago!


* Just to get an idea of the engineering:

A gas generator was used to drive a turbine which drove separate fuel and oxygen pumps, each feeding the thrust chamber assembly. The turbine was driven at 5,500 RPM, producing 55,000 brake horsepower (41 MW). The fuel pump delivered 15,471 US gallons (58,560 litres) of RP-1 per minute while the oxidizer pump delivered 24,811 US gal (93,920 l) of liquid oxygen per minute. Environmentally, the turbopump was required to withstand temperatures ranging from input gas at 1,500 °F (820 °C) to liquid oxygen at −300 °F (−184 °C). Structurally, fuel was used to lubricate and cool the turbine bearings.


Moderator
PS: Listening now, Ganderson - thanks. (I had to take the one dot out of the URL.)
Ganderson
PS https://youtu.be/j0wCPXpRoWQ