Nat-Geo and the once great Royal Scientific Societies - Part 2 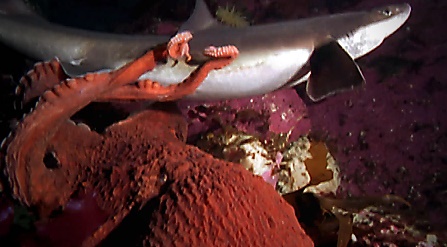 It just so happens that it's SharkFest week on the Nat Geo channel, and being out at the relatives place, there is a TV. The thing's not on often, as we're mostly on the same page with the whole Bread & Circuses thing, but with kids, especially 8 y/o boys, well, somewhat coincidentally, I can report on SharkFest tonight. This is another intro. about TV, this time to the 2nd part of this post that WILL get to Royal Scientific Societies, I promise you, old chap!

The kids like this animal vs. animal stuff, and for us, we've got a few of the books ... more than a few ... shark vs. salt-water croc., rhino vs. elephant, spider vs. dung beetle, etc. One of them is even set up like the NCAA playoffs with single-elimination (Nature is a cruel mofo) tournaments starting with 16 animals in the bracket(?).

The "scientists" on this TV show sound like freakin' World Wide Wrastling* Federation announcers, not at all like I imagine the 1850's president of the Royal astrophysical society did, even disregarding the accent. I mean, how many times do I need to hear "this one is an apex predator in its own right"? It was said for any animal, as this makes the guys (and one token lady) sound like scientists I suppose. I guess even minnows are apex predators, if it gets the kids' attentions - how about that lizard in the car insurance commercials, apex predator or not? "Next up on Nat Geo, (geo, geo, geoooo (with a lot of reverb)), it's Geico Gecko vs. Aflac Duck in a cage match, no holds barred, fight to the death. Post-fight wrongful death lawsuits to be shown next week in SHARK FEST (Fest,... fest .... fest...)"

Oh, BTW, in that Octopus vs. Spiny Dogfish Shark match-up that I had 3 large riding on, at the end of it, one of those loud announcers scientists called it a draw. WTH, man, you just got done telling us that the octopus had that thing immobile, and the shark was going to die soon from lack of oxygen, and then the octopus was going to take him back to work on him with his beak. How was that a draw? This is cough, cough, Bullshit, cough!

So, yeah, I was guessing yesterday, but, the "National Geographic Channel", aka "Nat Geo" is now another animal channel. Kids, and lots of adults too, LUV LUV LUV the animals, so it was probably not a bad move. Changing the name to reflect what's on the shows - "nah, too expensive, and dammit, if the magazine's gonna suck, at least our name stands for exciting TV."

About that magazine now, again, here is a cover from an issue from a different time: 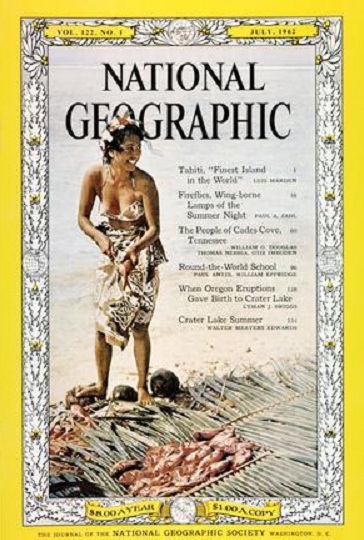 "It was a different time, you see... " Yes, truly it was. Compared to the bitch-fests of today (about our killing the planet, about too many white men in this field and that field, explaining why these people arguing with our science are not scientists) in that magazine, in the past science was in a different world. Just go find other back, and I mean BACK, issues of National Geographic and see some science and reporting from the last vestiges of the age of reason.

I don't remember much of the age of enlightenment. I wasn't there, or it's a hazy blur, but I do remember my reading of proper scientific publications back in the day that, themselves, often pointed back to that golden age. I think of the Royal Society of Astronomy, and others for Physics (eventually branching out, I'm sure) and a Royal Geographical Society of some sort. Sure, geography is not a science, but there was science involved, as the reader may want to read about in "Eclipses and the Galilean Moons of Jupiter in the Age of Exploration" - Part 1 and Part 2. Even without the science, Geography was a great part of this age of not only reason, but discovery.

See, these societies were composed of truly educated men who really sought the truth, most of who would put their lives on the line for science and discovery. On the science side, there were men theorizing and proving (or trying to prove **) basic physical principles. Nowadays, there are loads of little inventions and apps coming around every day, but the real thinking behind them is minuscule in comparison to what the men of science did during the enlightenment. After some serious thought, some glasswork, some cork, a piece of steel, a thermometer (the simplest of things, but the best available) could be used to discover an important physical law - in an afternoon of solid fun!

The adventure of it was things like: astronomers sailing in uncertain conditions to the Southern Hemisphere just to observe new nebula, or to use the position to make discoveries based on parallax, botanists sailing around the world to the Galapagos Islands to study the turtles, OK tortugas, archaeologists riding camels across Egypt to get to some never-before-seen-by-folks-who-give-a-shit caves with bones of who knows till we get the stuff back to the lab, and chemists blowing up things in the lab to understand exothermic reactions, or really just for the sheer fun of it.

For the geographers, there was a whole world to explore and report on. Expeditions were sent to the north and south poles. People went into the high mountains of the Andes and Himalayas, not to be just the 1st transgendered climber to bag a 20,000 ft. peak on a Tuesday, without oxygen, but to find out what even WERE the highest mountains. Groups went to observe the Bushmen of the Kalahari, with that, albeit small, risk of going native.

Now all the educated and adventurous men would, if they had made it back alive, come to London and give exciting and enlightening reports back to their Societies. The audience could ask questions of all sorts and admire and be inspired by these Men of Reason. Then, the information learned could be disseminated via the Journals of these Societies to others around Europe, American and whatever other tiny pieces of enlightened world existed yet.

As a slight aside, in those old days, one didn't even have to stick to a very specific field, like the Anthropologist who only studies those Bushmen, or the Astronomer who specializes in variable stars, or the Chemist who studies certain polymers, as is the case today. In that age, from the 1500's to 1900 or so, one could dabble, and even be an expert in, almost every new thing becoming known to man. Leonardo Da Vinci was even a great artist, yet did his human biology and physics too. One could truly be a "Man for all Seasons". Basically, it was one hell of a time to be a scientist, anyway!

Back to the journals of the days of enlightenment, Scientific American, going back to its beginnings 130 years ago, was the American version, being published by this august organization, the National Geographic Society. American were already playing a big part in the age of science and discovery by the 1880's. The point of the organization was not to sell magazines. It was about the world of discovery. These were the eminent men sending explorations to the poles, to high mountains, to deepest China and Africa, and having them come back to regale the folks in Washington with their findings. The journal may have started out being just for other scientists, but as a magazine, with the best (later on) color glossy photos and stories of places never seen by Western man, National Geographic magazine brought the age of discovery to the common man. Then, around the mid 1980's, it went PC and, well, end of story. Well, we still got our SharkFest*** for the next 3 weeks on Nat Geo, so there's that, right? The Age of Reason is well behind us now.

"So what if you reached the age of reason,
only to find there was no reprieve?
Would you still be a man for all seasons?
Or would you just disbelieve?"


I guess it is History Rock week here at Peak Stupidity, and to do this right, you're gonna need pretty much all Al Stewart, 24/7. As I wrote yesterday, the Time Passages album had a lot of great songs, and this is one of them.

** The theory of the substance of phlogiston comes to mind. I want to write a post on it, as many just disparage as stupidity this theory, but it was the best and most ingenious theory at the time. Back Bunsen burner for this one ...

*** but I'm not putting any more of my money down on any invertebrates, I tells ya'!

Moderator
PS: Hey, Joe, you just dragged out another Peak Stupidity Pet Peeve from the vault. I don't watch but very rarely at hotels, but the way these damn TVs are all computerized now, you can't flip through nearly as fast. TV sucks even more than it ever did.

Oh, I think the Saltwater Croc won the whole bracket, per my kids book.
Joe Stalin
PSDecades ago there was woman where I worked who complained when MEN were changing television channels that when some nature program was on the MEN would stop and look at that.

Guess females don't like the Dog-Eat-Dog lifestyles of animals!