Keep this shit up, Americans, and we're gonna be a hollow shell of our former selves ... wait, that's not so bad....

Peak Stupidity has just been informed that the President of Somalia, Mr. Mohamed Abdullahi Farmajo, has RENOUNCED his American citizenship to pursue other endeavors continue leading the Moslem country of Somalia. 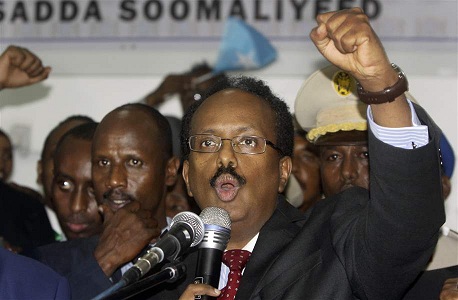 (Well, that's the way you do divorce over there.
You'd think telling the IRS to go stick it would be easier ... you'd think ...*)

Can it get any stupider?! I mean, I have plenty of stupidity to write about here, and now this comes across my milk crates in Mama's basement desk. We will have to implement a policy of stupidity triage pretty soon, to allow us to cope with it all - a post on that is forthcoming.

Really, a foreign president, not just of Canada as kind of a friendly gesture, like Trudeau being made a Professor Emeritus of Gender Studies or something, being ALLOWED to be a dual citizen. Which country would you think he'd be loyal to? I mean, just take a wild guess here. This is what Mr. President, Moe Farmajo, was made to swear in front of, well, probably some other foreigner who works at the CIS office a convenient nearby city to that of Mr. President Farmajo:

That is the Oath of Allegiance that we have millions of people a year from around the world swearing to. They wouldn't ALL lie to us, would they? Hell, just look at that "... support and defend the Constitution ..." verbiage. You can't even get 95% of Americans to agree to that, or even understand the concept.

Maybe that verbiage should be arranged a little more in line with current-era America, perhaps "... to support the people from my home and go back and defend that place on behalf of some other guy named Moe if need be ... or, just go on the offense here, 6 and a half dozen or the other thing ...".

I haven't even put a link in yet, so in addition to Steve Sailer's post I found this Yahoo one called "Somalia Leader Renounces U.S. Citizenship Amid Trump’s Rhetoric". PLEASE DON'T CLICK ON THE YAHOO LINK. I only put it in to demonstrate their ridiculousness yet again. Really, being "amid Trump rhetoric" is what made this guy renounce his citizenship. Isn't it more about keeping his money out of the grubby hands of the IRS, something for which I totally sympathize, to put it in some other foreign country in case Somalia's Shit Hits The Fan again soon?

That's just funny though. Yahoo wants its readers to be mad at Trump for running this poor guy out of the country, by God! Hahhaaa! I see that headline in a slightly different light, as giving Trump some partial credit for this man's departure. Kudos, Mr. President! Who? Why, both of you, of course!

Though I give the IRS a hard time, down below, and always, as a matter of fact, I'm still here. This Farmajo had no business ever being let in here, other than as a tourist or diplomat. From the article, by Yahoo/Bloomberg beat reporters Mohammed Omar Ahmed and David Malingha:

The renunciation comes about two weeks after President Donald Trump attacked four minority freshmen congresswomen including Somali-born Ilhan Omar, whom he asked to return to the Horn of Africa nation.

Oh, verbally attacked, OK. I guess you cleared that up by including that President Trump asked them to return to the Horn of Africa nation (what, Somalia, say it. Oh, built-in geography lesson there). Yeah, but they've got to do more than return. They must renounce, renounce, renounce, till it hurts.

Buh bye, Mr. Faramajo. Don't let the screen door bust your filament on the way out."** Oh, and bring that Congresstard Omar with you and those other 3 ... hundred thousand."


♪♫♬ "Where have you gone, Mr. Faramajio?
Your nation sprays its tsetse flies for you.
Whoo hoo hooo!" ♪♫♬

* On this IRS thing: They really do want to get their hands on Americans' money, no matter when the last time you worked an hour in the country. People pay a coupla thousand dollars and have to do paperwork, then show up for an INTERVIEW(!!)*** just for the privilege of not having the Infernal Revenue Service hound them for the rest of their natural-born lives.

That Moslem form of divorce could be quite welcome here too for both spouses and Tax Revenue organizations.

** Man, we are really having a hard time with this. Peak Stupidity again apolgizes for the PIC remark on the light-bulb headed Somalians. Incandescent bulbs are being replaced by CFLs and LEDs the world over and are an invention from America's racist past. In the future, Peak Stupidty will endeavor with great alacrity to be enclusive of other forms of luminescence.

*** I can see that now: "Do you feel that you have been rehabilitated and are able to live outside of America on your own. Keep in mind - you will not be tracked and taxed by the IRS! This is your last chance to un-renounce."

Jimbo
PS: On the iEspionage topic, from ZH"

https://www.zerohedge.com/news/2019-08-02/apple-suspends-program-records-users-having-sex-and-buying-drugs
Jimbo
PS: Off of VDare: