This involves an immigrant DOING the murdering, if that wasn't clear, which is almost always the case these days. 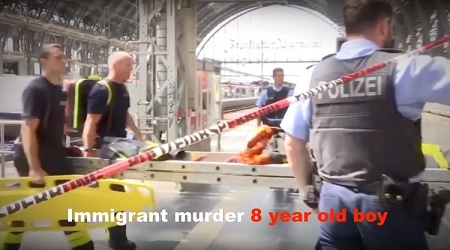 James Kirkpatrick of VDare reported earlier on this week on another mess of blood on the hands of Angela Merkel, with NIGHTMARE: Mother Watches 8-Year-Old Son Die After Being Pushed On Train Tracks By Eritrean Migrant.

The tragedy took place on one of the platforms of the central railway terminal in the German city of Frankfurt – the nation’s second busiest railway hub. An eight-year-old boy and his mother were waiting for a train when they were suddenly attacked by a 40-year-old Eritrean. The assailant grabbed the woman and the child and threw them on the rail tracks right as the high-speed intercity express (ICE) was pulling into the station.

The 40-year-old woman managed to escape near-certain death as she made it to the pathway between two tracks. She tried to reach out to her son when the train ran over him, a witness told German media. The boy died at the scene...

The perpetrator also tried to force another person onto the railway tracks but his third would-be victim escaped. The attacker then attempted to flee the scene but was pursued by a group of passengers and eventually detained by police outside the terminal.

That was Mr. Kirkpatrick excerpting Russia Today's story. This man from this southwest bank of the Red Sea country (just trying to insert in my geography lesson, as per the Yahoo style book here) should never have been in Germany. Would this murder of an innocent 8 y/o boy have happened if Herr Merkel had not opened the floodgates to strange foreigners due to her COMPASSSION?! Yeah, where's your COMPASSION now, you stupid, stupid broad?

Sure, the reader may retort*, "But this is just one Eritrean guy. There are 10's of thousands, and none others have pushed any 8 y/o little boys in front of subway trains." Yeah, maybe not (though I'm sure they're not making Germany a better place even so). However, ZERO Germans have pushed 8 y/o boys in front of subway trains (looking at Kirkpatrick's other incidents, the perpetrators don't seem to be Germans). That's 0 vs some small percentage, but that small percentage resulted in this needless horrific murder.**

Germany's Interior Minister, Horst Seehofer, cut his vacation short due to the incident and was due to address the public on Tuesday. He is set to meet Germany's top security chiefs and discuss "[s]everal serious crimes during recent time."

On Monday, Seehofer pledged that the attacker would be "called to account with all means of the rule of law." However, the minister also warned against drawing premature conclusions about the Frankfurt attack, after his ministry shared that the attacker was an Eritrean citizen.

"I note that some parts of the public have already formed a judgment of this incident," he said, adding that judgement should be reserved until the background of the attack is clarified.

I see that the muckety-mucks seem to be taking this seriously, but is that just because the word got out. I bet they would have like to treat this as the British authorities had for many years with the pimping of underage girls in Rotherham by Moslems. Then, the man notes that "the public have already formed a judgment of this incident". Yeah, the German public should should have started forming judgments long ago. If these ministers ever listened to said judgments to begin with, this young boy would be with his parents today.

You never know what kind of thing it will take to get the Germans actually riled up again. If this kind of murder, along with all the other unpleasantries of life caused by massive immigration of unassimilable types from strange-ass places like Eritrea, keeps ramping up, some crazy guy with a funny mustache may present himself, to initial acclaim. Were I the Dad of this kid, I wouldn't be waiting around for any guy with a funny mustache.

* OK, not OUR readers, but some hypothetical morons that may peruse these pages.

** It's one that reminds me of the Minneapolis mall incident, which I will write about when I get up the heart.


joe blow
PS
re: the funny mustache guy
Nationalism and Socialism have very powerful appeals.
Unfortunately, if we are to add Nationalism to our current Socialism (actually crony-fascism), it's going to have to be the left doing it (as before).

It'd be far better if we got a right wing ruler for life (to purge the system), but with the 'justice' system, news media, bureaucracy, banking and educrats lined up against anybody to the right, and so many people with noses in the federal feedbag, it just ain't gonna happen.

Any day now, the (D)irtbag party is going to realize that national unity would greatly increase their power. They will have a hard time getting their coalition of loonies on the same page, but a few 'nights of the long knives' should do it. They will be able to co-opt right wing parties by stealing Trumps immigration issue - what will that look like, brown-skins?