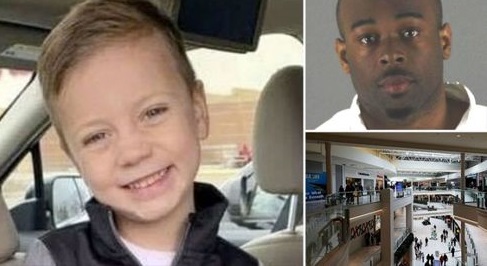 This is a hard post to write. It's not Peak Stupidity's usual thing. There's no humor, very little snark, and more evil than stupidity to write about. Really, it's about sadness, compassion, and now some hope.

This story is about the boy named Landen (last name kept anonymous) who was thrown over a railing 40 ft. down to the floor below in Minneapolis' Mall of America 4 months back by a sick/evil man named Emmanuel Deshawn Aranda. Hey, where's that guy from? What's he doing in Minneapolis, Minnesota, in the great white north, with a name like that? Good question. We all want diversity, I guess

VDare's Jame Fulford (along with Steve Sailer) wrote a couple of posts about this right after it happened, one being Black Privilege Is Ultimate Cause Of Minnesota Mall Atrocity. I might have forgotten about it, but for an article about a month ago that gave the condition of the boy. It was very sad to think about all he is going through.

“Up until now we have let our hopes govern what we have revealed to the public,” they wrote in a GoFundMe update. “However, the injuries and severe complications have now resulted in more than 15 separate medical procedures or surgeries, including surgeries for two broken arms and a broken leg, removal of his spleen, procedures for fluid in his lungs and stomach, as well as for facial and skull fractures; and just this past weekend, he had a stent placed in a vein that runs through his liver because of the serious complications he continues to endure.”

At the time I'd read the above, there was no certainty Landen would live through it all. I felt some serious sadness for this kid and his family. It's not the usual thing for me, but I prayed for this beautiful little boy. He probably won't be ever "just fine", but maybe he can come close, after many more months or years.

Well, People magazine, not any kind of publication you'd normally read about on Peak Stupidity, reported yesterday*: Boy, 5, Out of Intensive Care Nearly Four Months After Being Thrown from Mall of America Balcony. I was so glad to hear this. Landen is not OK, by any means, yet, but he's in a full-time physical re-hab facility.

The man who did this horrific act did this with premeditation. He's said by his Mother to have been mentally ill since 3 y/o, but you normally don't read something like the following, even from a really sick fuck:

Investigators said Aranda had gone to the mall “looking for someone to kill” and felt driven to aggression after being rejected by women he’d tried to speak with there, according to a criminal complaint obtained by PEOPLE. Aranda told police he had first considered choosing to kill an adult at the mall the day before the incident “because they usually stand near the balcony,” but that did not “work out,” the complaint states.

This article is unusual for a Peak Stupidity post in that it is just a very specific story, using the tragic story of this one boy to arouse compassion, something a woman, or, well, People magazine, would write. It is kind of a fluke that I took this one so personally. Is this not anything different from what Herr Merkel, Globalist, Commie of Germany did with that dead boy washed up on the beach of the Mediterranean a few years back (causing her to invite in millions of unwanted, unassimilable, young-male refugees from Africa)?

Yes, it most certainly is. I look at this story and try to get down to the root causes. In the case of little Landen, a man this violent and crazy should not have been in a position to do this - that means he shouldn't have been out of a crazy house . Next, whether it's PC or not, you've got to get serious and fix the root causes, if you REALLY don't want to see this happen again, and you're not just signaling your great compassion to the world. Even for just this one guy, 19 years in prison, meaning possibly his getting out in half that time, means we haven't fixed this problem. I don't really know if any weapon would have helped to defend against a sudden attack like this, but more carrying of guns by good people can help.

In Merkel's case, there was another story on the fate of that boy that just wan't told in one picture. As I recall, the kid's Dad had done a stupid stunt taking him across the Mediterranean from Africa to the beaches of Italy (there's more to that). As to the next poor kid having this fate, what you do is send these boats home. It's not compassionate for the relatively few on those first boats, but it sure is, in terms of stopping more such stupidity. As far as fixing the real problem, any thinking German knew that this invitation of the future bums, robbers, and rapists was a bad idea. It did not fix any problem, but caused so many more, in the name of compassion for show, with no serious thinking.

If you're the type, pray for this boy Landen to get through all of this with no serious permanent physical pain and a normal life. How could you go a day without thinking what you could have done differently that one day at the mall, were you the Dad or Mom? That's some mental pain there. Nonetheless, 10 years from now there will be some extremely compassion Minnesota snowflakes who, in their extreme compassion for Emmanuel Deshawn Aranda, will help him get back loose. Compassion + Stupidity = Evil. Hug your kids.


* The quote about his previous condition is from People too and jives completely with what I'd read a month back. I'll give People a lot of credit for a plain just-the-facts article. The comments are pretty "based", as the kids like to say too. Some mention specifically what caliber round should be used to shoot this guy in the back of the head - amazing in this day and age.

joe blow
PS
I'd much rather face 1000x the current risk of accidental shooting, than allowing crazy thugs to dominate society, as is the case now.

People often worry about the wrong thing. The fact that Landon survived makes US feel better, but I'd bet that Landon often wishes he'd just died - I've been there, and with far less injuries than Landon has. Worrying about accidental shooting is another example -the CUMULATIVE ATROCITIES and IMPAIRMENT OF FREEDOM caused by having left wing loons and their imported thugs DOMINATING our society because of their will to commit violence. It SEEMS less bad because each of us hopes to avoid the scum's attention - but the societal effect is ruinous - it tends to make us a a bunch of powerless cowards, ruined by learned helplessness.

Speaking of cowardice and fearing the wrong things...
Why does the 'phobic' label have so much effect? Pretending we are not afraid is like burying our heads in the sand to hide - it surely is not courageous. I think people can't help being influenced by their biases (like fear), and the best we can do is admit our bias so as to be less influenced (like burying our heads). If people have a hard time getting past the labels plastered about by leftist scum (*hag language, I calls it), it is much harder to speak freely - but that's the whole idea, ain't it?

I think internet tough guys do us a great disservice here. I greatly fear talking about phobia on the internet
because of the deadly boring responses I expect. OK, go Rambo on their azzes, I'll cheer the loudest and weep the most at your sentencing. But what about some woman who wants to walk to the store? I used to run a small motel so this is something I thought about a lot - if a woman alone would not want to be there you have an ahole infested slum. I was not very kind to aholes, I highly recommend that approach.

*hagfish is ALSO the name of a nasty-toothed, bottom dwelling scavenger which exudes slime as a defense mechanism. Very apropos for the left, in both meanings.
Moderator
PS: Thanks, Mr.Blanc, pass it around.
Moderator
PS: I wasn't talking about accidents, Rex. Certain people are responsible enough to AVOID trouble, especially due to the responsibility involved with carrying a gun, and certain other people aren't and are too impulsive for this to be safe. That's a general statement, and that's the problem, because you don't always know which.
Rex Little
PS
Yes, it depends on the kind of people, but it depends even more on how many are carrying and how crowded the place is. As Derbyshire keeps reminding us, numbers matter. The odds of a one-in-1000 accident taking place approach certainly if you give it 2000 chances.

MBlanc46
PS Compassion +Stupidity = Evil. That ranks right up there with Diversity + Proximity = Conflict. Let’s spread it around, people.
Moderator
PS: It depends on the kind of people. Most CC people are very responsible and better shots than most cops, if it came down to that. However, the newer residents of Minnesota are they type for which the 2nd Amendment wasn't designed.
Rex Little
PS
I'm a Second Amendment absolutist, but I do NOT think it will work out well if a lot of people are carrying guns in a crowded mall, no matter how good they are. The likely outcomes are left as an exercise for the reader.