Is Donald Trump a woman trapped inside a man's body? 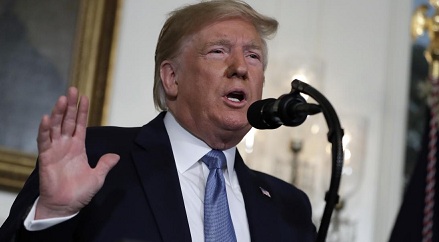 Hey, we've come up with a number of theories for why this President is such a tremendous let-down for the patriotic American people: He's been "Neoconned", though Deep-Stated is probably a better term (more here). He is just a bullshitter who sucked us in during the campaign. Along with that he's a blowhard who compares himself favorable to Ronald Reagan*. He sucks at the art of the deal. He doesn't understand the urgency and magnitude of the existential immigration-invasion problem. He's very easily distracted. Instead of 5-D chess, he's barely competent at tic-tac-toe. It could be a any combination of the above.

We will now add another theory, just going by the talk out of President Trump's mouth after the El Paso shooting. This was documented very well by VDare's "Washington Watcher" yesterday in Trump Blows El Paso Response, And Maybe The Election. He Better Hope Congress Fails to Pass His Terrible Proposals. What I read was pretty disgusting. This guy no longer seems to be on our side, maybe for some of the reasons linked-to above. Some of the commenters under the Unz Review's posting of the article told me not to worry, as Trump changes his mind daily.

That brought up the point of this post. Trump reacts emotionally to things such as the terrible mass shootings of the last couple of days. I wish I could say that it is just pandering to the emotional among us (the women voters and the ctrl-left), but I think this guy genuinely can't think straight and runs his mouth based on his feelings. That brings up the tweeting, the obsessiveness of this habit of the President being another female-personality thing. It's always this constant blabbering about this slight or that, making fun of his (and our) enemy, the Lyin' Press (not wrong, but just make the corrections, don't get emotional), rather than his using the tweets as a tactic and part of the "bully pulpit". From one of the Ronnie vs. Donnie posts, we explained this a bit:

... Trump's problem seems to be, as I mentioned in that intro. post, that he thinks the talk is all that's necessary sometimes. Encouragement, when all about you, the media establishment puts out it's usual lies, is a good thing. It is no doubt very helpful in rallying the base to vote, but what good is voting if the politicians you successfully elect don't really do any good for you? That's what happened - two years of President Trump and a GOP House and Senate, and what ?? Nada. Nada whole lot. I wish the current President would use the bully pulpit and (yes, sigh..) even the tweets to target Americans to help him get the work done - "Impeach Judge X in this district in California." "Tell Congressman Y to vote YES on ABC, or you will not re-elect him." That would need some attention to detail, which Trump doesn't have, and his traitorous underlings refuse to take part in.

There is that changing his mind every few days thing too. That's a very female trait too.

We have 3 female traits, the emotional responses, the blathering about non-essential business, and the changing of one's mind regularly, that seem to be "trending" with this guy. Therefore, my latest theory is that this guy is acting like a woman, psychologically anyway. Hey, I know he was a man's man and a playboy, etc., in the past. Is too much soy being used in the White House kitchen, perhaps?

After reading Mr. "Watcher"'s article, I sure hope the President didn't mean all of his statements of late. If that Red Flag law stuff (written about here and here) gets passed and Donald Trump signs it, he will have become another political enemy.

If Trump is truly a woman trapped inside a man's body then they should put him on a wheaties box or something...