Half-mast flags as a signal to the neo-Nazis

I guess that means to the 5% of them that aren't FBI agents. OK, Peak Stupidity really needs to give out some trophies, plaques, or SOMETHING. An NBC TV pundit named Frank Figliuzzi really deserves the gold for the rolling calendar year. Per Russia Today (can you imagine saying that 30 years ago? "From Russia Today ..."?), NBC pundit says Trump’s order to fly flags at half-staff after shootings could be nod to Hitler. Okaaay, then.

Trump issued a proclamation to lower flags to half-staff at the White House and other government and military buildings on Sunday to mourn the victims of shootings in El Paso, Texas and Dayton, Ohio. The flags will return to full-staff on Thursday, August 8 — but former FBI assistant director for counterintelligence turned-NBC pundit Frank Figliuzzi has seen a possible conspiracy in the date.

Figliuzzi explained that the number 88 is “very significant in the neo-Nazi and white supremacist movement”due to the fact that ‘H’ is the eighth letter of the alphabet and“the numbers 88 together stand for Heil Hitler.”

A secret code, or just the normal stupidity? 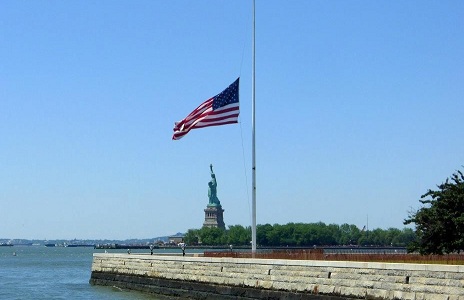 Yeah, all those non-FBI-informant neo-Nazis will get the signal clearly, as we all watch those flags go down and back up, right? This is, in fact, a a sore point for Peak Stupidity, as we can't stand any more of this flag-lowering crap to begin with. First it's the death of ex-Presidents, then scumbag Senators that just wouldn't leave office (see Juan McAmnesty - Rot In Place). Then, the flags stay down for WEEKS at a time, not just one day, as the guy gets buried. This business is out of hand, as now the flags being lowered represent what exactly? If we regularly lower them for murder victims, then the cities of Detroit, Chicago, and Baltimore ought to just buy shorter flag poles to begin with!

“So we’re going to be raising the flag back up at dusk on 8/8. No one is thinking about this,”Figliuzzi said, warning about the “language and messaging” of the decision.

It is true that white supremacists use the number 88 as an abbreviation of ‘Heil Hitler’, but perhaps “no one is thinking” about it in this context because most people don’t think in terms of everything being a coded shout-out to neo-Nazis?

Figliuzzi said Trump did not necessarily pick the date “deliberately” but said it was still an example of the “the ignorance of the adversary” (white supremacists) that is being “demonstrated by the White House.”

Moderator
PS: Hmmm, which of those 3 biggies is the most exemplary, BernCar? (I sure don't want to dox your in-laws as anti-Peak-Stupidity, or something...)

So you were that proverbial truth-telling turd in the punch bowl. That's great your family is with you. I would say it's mixed for my relatives, though solid for my own family. (Actually, the wife doesn't give a crap about politics, and that's fine with me.)
BernCar
PS: "can you imagine saying that 30 years ago? "From Russia Today ..."?"

A few years back at a family gathering, I mentioned to a sort of relation by marriage (who works at a "news" organization whose three-letter id you would recognize as the exemplar of the Lyin' Press) that it was sad that I felt more confident getting my news from Russia Today than from American sources. I had been in the punch bowl a bit, but I swear I was just trying to engage in a serious conversation with a young person about the state of the nation. Needless to say, this person walked off with a dismissive snort. Lesson learned. Though generally, you, Mr. Newman, would be very safe talking politics at one of our family reunions. The young person referred to is a solitary outlier in my family, thank Godl