Importing a civil war, in Sweden

"Excuse me, Swedes, which way to the ABBA concert?"
"ABBA-Lou Akbar!!" 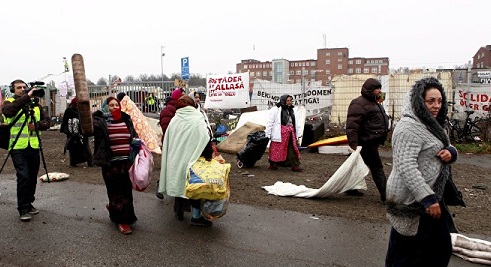 We're used to the immigration stupidity here at stupidity-central. We've only got 162 posts on this stupidity with said topic key. I'd thought we'd seen it all. Sure, the Western nations' taking in of huge numbers of people from extremely far away in distance and culture is apparently just what you do. America has been going on with this stupidity for well nigh (actually over, but I just wanted to write "well nigh") 5 decades running.

If it came to awards of some sort here, Sweden could very well take this one. We've commented on the stupidity of the changes of this decent, though Socialist, country of ABBA's time turning into a vibrant violent place, in The ruination of Sweden - "Finally facing our Waterloo!" and Feminist Cops vs. African "Refugees" - venue: Modern Sweden. In that latter post, the un-Swedish-like violent disagreement was one for which we could root for both sides ... to lose, that is. "You go, girl! You go, bro! Yeahhh! C'mon, you're both losers!"

In a timely article by Jake Bowyer of VDare*, Trump Vindicated—Immigrant Violence Getting REALLY Bad In Sweden, I ran into something that is even worse than the usual immigration stupidity. Mr. Bowyer gives a lot of stats on the Moslem violence directed against each other and the (REAL) Swedes, with particular focus on Stockholm, Goteburg, and Malmo. Among all the numbers of people from all over the shitholes of the world, I came to:

Yeah, sure, that's what you want. You import, in close to equal numbers, a bunch of Iraqis and a bunch of Iranians. Weren't these people in a big war in the 1980's**, that even involved poison gas attacks? See, Iraqi Moslems and Iranian Moslems are of some different sects that do not get along. It's thought by the left-wing Swedes (OK, most of them) that it'll be different when they come to lovely white Socialist Sweden. "It's different here. We hope to have them around the bonfire at city center holding hands and singing Kumbaya like the rest of us Swedes."

We've imported large numbers of unassimilable immigrants of some extremely-foreign places ourselves, so who are we to lecture the Swedes, you may say. Yeah, but have we been importing both sides of a civil war before? Is this just a new version of the Neocons' theme "We need to bring them over here so they won't fight over there and can fight each other over here ... or something"? Is Sweden just bored with the stupid sport of soccer - is that what this is about?

PS: The reason I called this post "timely" is that Peak Stupidity commenter Ganderson will very shorty, if not already, have boots on the ground in-country to report to us on the situation. OK, if not boots, maybe Birkenstocks on the ground, as is more likely for a Dead Head ;-}

* The name sounded just a tad familiar when I read it. I see that this writer has been mentioned before as a writer of a review of Tucker Carlson's Ship of Fools.

** That was one that America should have stayed way out of (even more than for the usual reasons), but didn't. We should have let them beat the hell out of each other.

Well then, I still think you could have your pick of Agnetha or Anni-Frid, Mr. Ganderson, if they are not taken yet.
Ganderson
PS: I look very Scandinavian, but sadly more in the STELLAN Skarsgård brown haired squarehead thin lipped variety; Not the ALEXANDER Skarsgård stunningly good looking variety.
Moderator
PS: I'm still in the making-fun-of-stage, Ganderson, so ... you know ...

I really liked it with the words in Swedish (I'd heard that, early on, at least, the band members didn't know any English, and just memorized the sounds to sing in English).

It's gotta take some clever thinking to change the lines that rhyme in Swedish to make them rhyme in English.

Dig the outfits!
Ganderson
PS. Heading off Tuesday- and, although I’ve spent most of my life making fun of guys who wear sandals, I’m now a sandal guy- although Ecco, not Birkenstock.