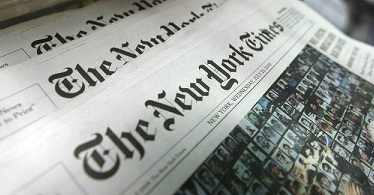 As I wrote in the previous post, pundit Steve Sailer, known as "iSteve" from the name of his former blog, read the NY Times, at least enough to root out the complete bullshit almost on a daily basis. Were Peak Stupidity to do such a thing, the time wasted and anxiety caused by such a practice would make us extremely hypertensive, albeit with a side-benefit of increased regularity. Mr. Sailer does yeoman's work in this regard, bringing the bullshit to the forefront. The Peak Stupidity department has not yet been able to hire any competent yeoman, so there's that too.

The big thing lately with the NY Times and other Lyin' Press outlets is, per Sailer here*, a big pivot from the no-longer-believable (by anyone) Russian collusion in election '16 narrative to a new one. Mr. Sailer's post NYT Editor: After Failure of Our Russia Mania Plan A to Get Trump, We've Launched Our Racism Mania Plan B, gets into some details with some idiotic back-and-forth conversation between NY Times "intellectuals". It's kind of touchy, because as they pivot to racism talk, they have to actually include people of a different race, such as nominally gay columnist Roxane Gay, an obese black woman, in the creation of this new narrative.

More Steve Sailer writing, in the full-length Takimag column 1619: Founding Fallacies describes the new strategy of the ctrl-left and their media department, the NY Times. I hate to excerpt too much from another great column by Mr. Sailer that you ought to go read right this minute**, but I'll include just a bit:

There haven’t been slaves in America for 154 years. So the topic of slavery might seem of little more than antiquarian interest, just as the now-vanished Rocky Mountain locust was a subject of immense concern in the 19th century, but of very little in the 21st.

But polite discourse today demands that we attribute the continued racial distinctiveness of African-Americans—such as their low average wealth and test scores and their high average crime rates—to the Peculiar Institution in order that white Americans be blamed, demoralized, divided, and exploited.

Yet, all over the world, sub-Saharan African communities tend to share somewhat similar characteristics.

A cynic might observe that the purpose of The New York Times venting endlessly about 400 years ago is because Times subscribers have controlled racial policy for the past 55 years.

Yet for about the past 45 years, African-Americans haven’t made much relative progress. Thus during the Great Awokening of the second Obama term, the dogma hardened that today’s blacks are pathetic puppets of events in the increasingly distant past: Emmett Till, redlining, and slavery in 1619.

And therefore whites must pay. (As everybody knows, what it’s really all about is money.)

Great writing there! There's only one little piece, right near the beginning, that I don't agree with:As reassurance that this latest intrigue would not fizzle as ignominiously as the Times’ previous machination,...I beg to differ on this bit. Maybe the goal of this big 2 1/2 year narrative push was impeachment, so, OK, that wasn't reached. Maybe you could say the “Russians are coming!” thing has fizzled, but it sure served it’s purpose pretty well. Maybe it would have happened anyway from this President who can’t seem to concentrate for 10 minutes and make a damn strategy, but this thing has distracted President Trump from enacting even 5% of Candidate Trump’s agenda for the whole 2 1/2 years. . I’d call that a successful piece of journolism intrigue, myself.

Anyway, the new narrative is a racial one, as you can read from the article or excerpts above (and if you go to the first link, you can read that this is not some conjecture on the part of Mr. Sailer. These "journalist" are talking about this new push out in front of everybody (well, everybody who reads that rag, that is). That brings me to my own amazement at the state of our "newspaper of record".


The New York Times back when it was at least pretending to serve the public:

They don’t even try to pretend anymore. Probably what the angst at the NY Times about their change in narrative is really about is that they don’t have as big a budget as they ought to. Any decent propaganda outfit in the old Soviet Union, Red China, Cuba, or Oceana would have had a bigger share of the nation's budget available to it, and RESPECT too, dammit! Those other organizations, back when Communism wasn’t so half-assed, would not have had to put up with the nominally-gay, obese black blob of human protoplasm that's part of this NY Times "conversation" having anything to do with the assignment of work and the seniority list.

One excerpt about the now-abandoned Russia collusion narrative had "That was a really hard story, by the way, let’s not forget that."

Just WTF does he mean by “hard” here? Doing the reporting is not hard. You just report what this guy said, what that guy said, what happened here, and what happened there. I guess it is “hard” if the job is working for years to make some narrative work out to your liking. Just listen to this following crap, and replace “cover” with “generate” and "interpret", and you can see what the actual job of the NY Times is:

Grappling is what happens when the truth doesn’t fit the narrative well enough. Gotta grabble … yeah, it's hard. This is not how reporting-the-news works. It is exactly what one would expect from a propaganda department of a Communist country though.

It’s just time to do what should have been done long ago by the Clinton Administration, Let’s go ahead and put the NY Times on-budget, so they can get the job done!


All the headlines that are fit to swap out: 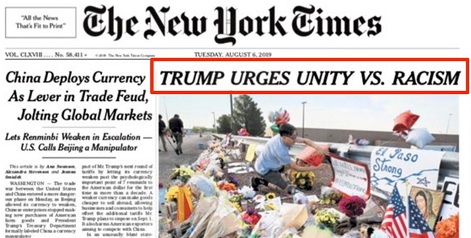 * He's got a number of other posts referencing this ludicrous revision of history to make 1619 (year of importation of the first of the relatively few slaves (compared to say, Brazil or the Caribbean islands) THE important date in history.

** The unz version, for enjoyment of the comments, is here.

Moderator
PS: I was looking into the email deal a while ago. I may have to call the hosting co. with some questions. They give you lots of room and options for many accounts.

If you want to wait until I get that set up, that's fine too.
Moderator
PS: You know, I've never even tried to use the email function related to my hosting, Mr. Ganderson. I could check that out, but I've not really found any other reason to use it yet, other than something like this.

The other option is, yeah, you could paste it in here (possibly in pieces if you need to, and save your work elsewhere), and I could delete those comments soon afterwards.

I am looking forward to your thoughts of Scandinavia.
Ganderson
PS. I have some thoughts about my recent trip to Northern Europe. Is there a way to send them without just posting them? Thanks.