The Mall of America 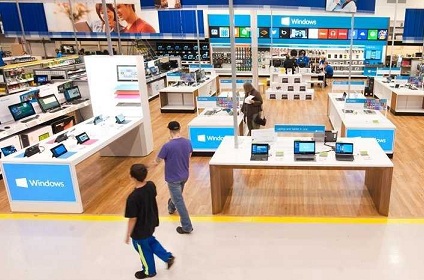 We had to spend a number of hours at the "Big Box" stores a few weeks back, before our family vacation trip. That expression, the "Big Box", is very appropriate, as your Wal-Marts, Targets, Best-Buys, Costcos, etc, are just very big bright open boxes. There's no character to them, of course, being part of Big-Biz large chains. Additionally, unless you like living in an ex-urb (just not my thing, but many don't have so many choices), these places aren't going to be nearby. In fact, maybe the real estate agents are using the Big-Box store as a selling point now. "Pretty good schools, within easy walking distance, around and round a big spiral with no sidewalks, to the fashionable Big-Box and Chipotle district!".

Therefore, it could have been a very unpleasant couple of days shopping for a digital camera the first day, and then going back the next for a swap out for a non-defective one. (It's kind of old-fashioned buying a camera of any sort nowadays, but my wife really wanted something better than the phones.) Yes, again, the Japanese branded camera was made in China, and therefore subject to the usual Q/A of cheap China-made crap. The time wasted was indeed annoying, of course, but the interaction with the whole Big-Box crowd was not unpleasant as expected.

It was the usual diverse crowd that you're gonna get anywhere in a public area nowadays, unless you are in parts of New England or northern Idaho. Yet, in this case, it was a good experience with both the salesmen (and one young lady*) and the crowd too. The first young guy really loved cameras, especially film ones (really?!), and I spent 5 minutes explaining to him what B&W developing was all about before he steered us to the camera that would be best for us. Then next day, during the return/swap-out of the first one, we ran into a black guy who was a real expert on these things. (We had to first find out whether the problem was somehow user error - nope, it was CC-mC!) It was all surprisingly pleasant.

Especially surprising to me was the atmosphere. Even with the bunch of partial English-speakers and other diversity of the customers, everyone was polite and got along nicely. Perhaps I should come back on after-Thanksgiving "Black Friday" and see if this still holds. Perhaps not! Anyway, this gave me thoughts that led to this post: I see why people get sucked into this "diversity (if not our strength, which is flat-out ludicrous) is OK" business. They seem fine with it - in the store. Sure, we can get along splendidly. After all, except for THIS GUY, lots of people are happy to be shopping. They like acquiring more stuff. (Is this country run by women, or what?)

You know, you don't have to be there. Nobody has forced us together into the Big Box. When it comes to your neighborhood, your church, or your kids' schools, though, once you pick them, you've got to be there, quite a bit. You really don't want to be forced to continually deal with people that are not like you and have nothing in common. That's why the same people from the store will go to church the next morning with almost all white people, or black, hispanic, or Chinese. That's why people get really worried about who moves into the neighborhood, and parents especially, as those people's kids will be at school.

It was kind of a nice Kumbaya-style thought there, "yes, see, we can all get along". This what many of the Snowflake types must believe all day long. It's not what the globalist elites who arrange this stuff really believe, as they just want to destroy the place, traditional America, that is.

To elaborate, our elites don't want to destroy America as with a nuke. It's just that, as I've written many times, they just don't want any uppity, self-motivated, mostly white guys, who have discretionary income to form associations, work for political change, and start businesses that complete with Big-Biz's Big Boxes and that sort of thing. They want the 3rd world environment full of people that are so happy to be able to get that deal at the Big Box store today - savings today on toilet paper, school supplies, and milk chocolate rations - come now! We even sent a coupon right to your phone.

Yeah, it was an OK experience with diversity for a couple of hours there. People like to consume, consume, consume, so they are usually happy in the stores, except, as mentioned, on Black Friday, and then you really don't know what horrible thing diversity may bring, even in the Mall of America. Come to think of it, that's what the elites want for us. They would like this country just be be one big mall.

"I pledge allegiance to the flag of the United Mall of America, and to the public and Richard Stands ... "


* The young lady had a lot of unexpected integrity (well, they don't work on commission, is part of it) to explain to us about a phone that, without being unlocked, would not be the best thing for us. They did not have the unlocked type, so gave us this info. just to be helpful You don't get that all the time.

Moderator
PS: Sorry for the extremely late reply, Mr. Partain. If you're not drunk, then there's less chance you are being facetious here. As a young kid, when I said this pledge so quickly, I got something comparable to that Lyricosis that came out trying to listen to rock&roll music of the time. "And to the Republic for Richard Stands, one nation ..." and so forth.

Thanks for reading, Sir.

Twodees Partain
PS OK, who is Richard Stands and WTF does he have to do with The Moll of a Merkin? I'm not drunk, but I'm just not getting the pledge thing. I think it's half antisemitism already.