Now, before I go any further, let me mention that the joke above was truly LOL-worthy, back when we just started saying "LOL". Since I can remember very well the place that I heard the joke, I can pin down the time-frame to the mid or late 1990's - yet, I cannot for the life of me find a reference to it (duckduckgo, then bing, then the goolag) on the internet. I remember it was one of the Rosannes who said it even. It's weird to me that this funny joke wouldn't show up with top billing.

Maybe, in the current era, it's NOT FUNNY anymore. It's not funny because there are even funnier things going on, but not "haha funny", just current-era genderbender stupidity. The latest thing is a push for Victoria's Secret to feature a trans-sexual as one of their underwear models. The specific ex-man* in question is one Carmen Carrera, formerly a guy named Chris from New Jersey, and not to be confused with Carmen SanDiego ("Who in the hell is Carmen SanDiego?" you say. NO - it's "Where in the world is Carmen SanDiego?")


What in the world is Carmen Carrera? 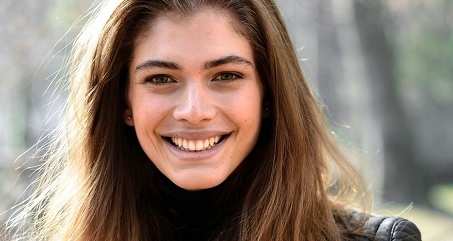 Now, one may be easily fooled - panty hose are amazing things, much less the unmentionables. However any future ads featuring Mr. Carrera would be better off not showing us the unmentionables. As much as the whole point of Victoria's Secret lingerie is to reveal a whole lot but cover just a titillating bit, there is going to be a new Victoria's secret, a secret probably better not ever revealed, if you want to sell underwear. The new secret, psssst ... is that Victoria used to be named Victor.

Now to get serious and political for a paragraph or two, or four, how would it be a good thing for these enticing ads, probably more looked at by men than women, to not feature the sexiest REAL women? Women don't want to emulate a transexual, and men would be afraid to look at another ad again for fear of being aroused! I'll say in this store chain's defense, that this does not sound to be the store's idea. It's a petition, per the Daily Mail article linked-to above with 22,000 signatures of people that think this is really important.

Yet, Victoria's Secret wants to sell sexy underwear, and that depends on advertising more than with a business like, say Advance Auto Parts. I mean, I'll go buy a set of shocks for the car's rear end without seeing a picture, but if I want a set of panties for the woman's rear end, they'd be better off it I see it on a woman in a picture. That'll turn me into a motivated buyer.

Now, Peak Stupidity has explained numerous times that the current economy is one of crony capitalism (old name - "fascism") with Big-Biz holding sway over Big-Gov to get anything done to keep them in business and the small guy down. We think the media business, as one example, might as well be department of the US Gov't and not really in business to make money but as an arm of the State to spread the propaganda. Big-Biz seemingly has nothing to lose by supporting the "globohomo agenda" and all of the modern stupidity.

Victoria's Secret, like other big business, is ready to kowtow to any piece of current-era stupidity that the elites and their ctrl-left minions are pushing. This genderbender stuff is, of course, one of the big ones. Still, these people are supposed to be trying to sell sexy lingerie (that means underwear for those of you in Del Boca Vista). I mean, eewwwww!


* Not to be confused with the X-men. They are normal ... for today's world. "Ex-man" was coined by Steve Sailer, I think.

Jimbo
PS: Followup to old story on the zoo: