An anonymous commenter on the unz site regaled me with a tale of his experience in Traffic School, one that beats Peak Stupidity's couple of anecdotes all to hell. We related our experiences in "Good luck streak in Traffic School".


Californla raw says must keep turn signal on until 10 minutes past intellsection.
There will be test! 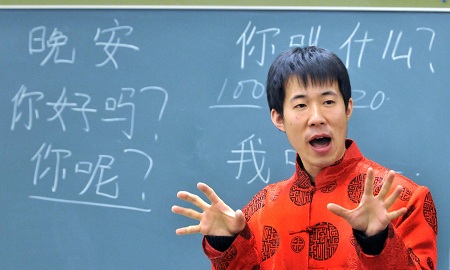 In Los Angeles you can sometimes get out of a speeding ticket by taking a few-hour class in traffic safety. Originally off duty cops would lead classes that concentrated on showing gruesome accident videos. Then an entrepreneur got the idea to organize classes led by struggling comedians, which were more entertaining.

Since I was studying Japanese I went in another direction and signed up to take the class in Japanese. It turned out that the teacher was Chinese, who could speak a little Japanese, and the class was supposed to be bilingual. All the other students were Chinese. To his credit the teacher every once in a while said something to me in Japanese, but most of the time I had no clue what was being talked about.

Nevertheless, it was enough to keep my driving record clean.


What a brilliant idea this guy had! You have to spend the time, if you're gonna do the crime, cause, I know, you can't do FIFTY-FIVE! Why not allow yourself the luxury of daydreaming time, without the annoyances of a distracting language that you can understand? You've gotta pay your own good money for Traffic School. I personally think that the US Gov't should guarantee bank loans for this important education - it's only fair.

A Chinese driving instructor teaching Traffic School in Japanese in California! What a country! Only in America, no I mean, in California. What's next, Gypsie instructors teaching 3rd year college Ethics 301? Guatemalan illegal aliens teaching prep classes for the US Citizenship test?

I'm sure the roads of California are just a little bit safer now. Thank you for your testimony, anonymous commenter.