Perhaps the best way to get a song out of my head is to blog about it. The great live version of John Denver's Rocky Mountain High is the case today. There's only one bad part of this live version. Whether it's for trademark reasons* or I dunno, at the end of the chorus, he does not sing " ... Colorado". I keep waiting for that, and, well, I had to sing "Colorado" it myself to make this work, and, believe me, you wouldn't want to be here. 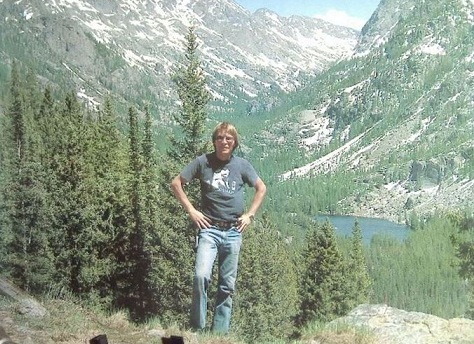 
No, that's not all my thoughts on this. I thought back to the time of John Denver's music, including this very inspirational classic**, when America had 2 1/8 hundred million people in the same area in which there are now 3 1/2 hundred million (depending on which aliens WANT to be counted). Maybe we should pick up that Greenland - it IS, in fact, kind of high, but that's 11,000 ft. of icecap, not quite the scenery one would imagine from the song.

It's just so much easier to have room to enjoy the land, and Rocky Mountain High, sung by someone who was no silent majority member*** has the lyrics you can't sing today "... more people, more scars upon the land ...♪♫♬" in it. This was a time, when, for just that one decade of the 1970's, more people were moving out of American cities than into them. The treehuggers of the era were no longer wearing sandals and keeping their arm-pits unshaven (unless in the middle of hiking the Continental Divide). They were no longer hippies, but put their money where there mouths were often, to get off the grid or at least leave the rat race, as John Denver also sang "Thank God I'm a Country Boy". There were a lot of people getting high in all kinds of ways, some of them while much closer to sea level than John Denver was. There were people singing about "blowing up your TV" even, my kinda people!

Your Peak Stupidity host was known to get high in his time, in the literal meaning of this wonderful song. I've hiked a lot in one particular mountain range that I consider very pristine. It's my favorite, and "I've been everywhere in this here land.".

Yep, what a time to be an American that was, in the era when John Denver was getting Rocky Mountain High! We lost this great musical artist more than a decade back. He died while getting high flying small homebuilt aircraft, something that would be right in the wheelhouse of a 1970's off-the-gridder. As you get older, you would find it easier to get to get high with a horizontally-opposed IC engine, versus hiking it. Or, you know, you could never see the Rocky Mountains and still be "born in the summer your 27th year, coming home to a place you've never been before... ♪♫♬

(Well, whaddya' know? The first video I embedded, with the best scenic views of the mountains, was not allowed to be played embedded. That's, like, Rocky Mountain LOW, or something.)


* For a State, though?! I figure Colorado, especially in this day and age, is perfectly fine with being associated with getting high in all meanings of the word.

** Kind of like a 2-generation-ago preppers anthem on getting off that grid.

*** He was a Democrat back when they were not the anti-white-people party, but then he was also anti-2nd Amendment and a critic of my man Ronnie. Not cool, Kyle John!

Clyde (unz)
PS=== That free grab app is not 100% perfect. Also try https://www.mp3juices.cc/ For converting youtube videos to MP3
Moderator
PS: Thank you, Clyde, for bringing up that app. I really want to grab about 10,000 songs of my kind of music.

As to Rocky Mountain High, the one I refereed to at the beginning of the post was a less-polished live version. I'll look for it on youtube - this was from a CD in the car.
Clyde (unz)
PS -- I was never a John Denver fan but this is a great version of Rocky Mountain High. Clean as the 8,000 ft elevation mountain air. Ringing with acoustic instruments. I put this on my Sansa MP3 player via the youtube to MP3 converter app at freegrabapp.com
Moderator
PS: Yes, Restlelss, his plane crash was due to fuel starvation, not fuel exhaustion. I don't know if it wasn't POSSIBLE to move the fuel selector - that just doesn't make sense - but one would have to have the thing trimmed right, and this was not a forgiving airplane like a single Cessna.

I take it that 94110 is a California zip code, and didn't John Denver crash off the coast somewhere south of there (yeah, sorry, I hate looking things up on the fly all the time)?

I don't know how much John Denver's fans were bothering him, and whether that explains his excessive signage. Like your lady friend, I was on a road trip and went out of the way, just a tad, to Seymour, Indiana to see about this "small town" of John Cougar. People pointed out his Mom's house, but not his Melon Camp, haha!
restlelss94110
PS As someone who was alive in those days of this song's release, a couple of things:
The song's overlay of dueling guitars was truly remarkable, enticing, joyful, amazing.
Several years later, I worked with a lady who one day told us that she had been a big fan of John when she was a girl and had urged her family while on a touring vacation to go by his house (in Colorado). She was very disillusioned by Denver's posting of a series of large signs telling all to not bother him. To her it seemed excessive and excessively mean. Which apparently he was, in real life, at least in the last decades of his life.

I also just happened to be on the beach near where his little plane crashed that day of his death (my parents lived in that area). He was more likely to be drunk than high by then (he had some DUIs and there was a nasty divorce that claimed he was an abusive drunk). Several years ago I read that the plane he was in was experimental and had a design flaw in that it was difficult if not impossible to manually turn the reserve fuel tank lever while flying. Apparently, John declined to top up before taking off. He was beheaded in the crash.
I love this song. It is a remarkable achievement. And his TV show was pleasant and humorous. Thanks for bringing it up out of the past.
Moderator
PS: I imagine that song comes back every time you read or hear about Joe Biden. Sorry to do that to you. As for me, blogging about it didn't completely do it, anyway.

As I wrote way back about the Sierra Club, in that case the progressives didn't forget, but they sold their principles of environmentalism out for 7 million pieces of silver (at today's spot price).

See https://www.peakstupidity.com/index.php?post=24
BernCar
PS: Yeah, but when you get a song out of your head by blogging about it, it often gets into my head. I've been humming that damn "Petticoat Junction" theme song ever since you wrote about Uncle Joe movin' kind of slow, seems like weeks ago.

On a more serious note, the 50% increase in the U.S. population over the course of about fifty years is not commented on enough. That's a helluva increase and with grave implications for the environment, which our progressive friends seem to have forgotten about.