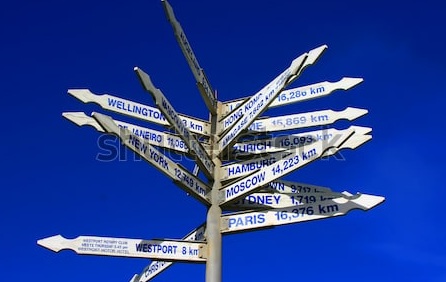 Way back, in this Peak Stupidity Roadshow (formerly "Traffic Stupidity") post, called Smart Devices / Dumb People - Will Moore's Law hold?, we mentioned a possible trend for the near future. That is, with all the Artificial Stupdity around on the stand-alone GPS/database devices and now the smartphones, how long will cities, counties, and State road departments keep up the signs?

I related that short anecdote in that post linked-to above from 2 years ago in which the fellow who trusted his GPS over some simple directions did not seem to understand that street signs could help him get to my house. In this case, the street signs are indeed still up. They are not on each of the 4 corners of the intersections anymore, though.

Maybe I'm remembering badly, and this is of course location dependent, but didn't they used to have one per corner? Perhaps that IS a big much. You do want one sign that can be read from your direction that is perpendicular to you, so you know what street you're about to cross or turn on. Then there should be a parallel one for the street you're on, for the drivers on the other street. They may as well be on the same post, for cost savings.

That guy on the way to my house had no excuse, but his old-fashioned navigation skills were apparently pretty much gone. However, I DO like to know where I am based on more than what a computer is telling me. Old-fashioned navigation on the road is very much like old-fashioned navigation in the air, using both Dead Reckoning* and Pilotage. Whereas in the air, dead reckoning would mean determining one's future position based on airspeed, heading and the forecast winds, on the ground it'd be "take a right on the big road, head north 1 1/2 miles, take a left at that intersection..." Whereas in the air, pilotage would be checking the deduced position via towns, lakes, highways/railroads, and antennas, on the ground it'd be making sure you see that Quicky-Mart at the left, and then there are the signs to POSITIVELY identify one's position**.

(If you've ever done a delivery job before the current-era, then you would know how addresses, usually, work in cities. Even numbers are going up on your right, the N vs. S. numbers split at this street, etc. There's quite a bit to it, depending on the city. I personally like rectangles, to make this work.)

It's a combination of both, dead reckoning and, let's just call it driverage, that, just as in old-fashioned aviation, lets one comfortably navigate around town, and around the whole country even. Both in aviation and with your average American driver on the ground, the old skills are being lost.

Someone in my immediate family (not gonna say who, in case she reads this blog!) is a case in point. Her phone account was somehow completely out of "data", as in she wasn't gonna get anymore of those internet packets till next cycle (not her cycle, the cell company's). The last time this happened, she paid $5 last minute at one point in order to get somewhere she'd already been multiple times. That's a serious unhealthy reliance on software***, and explains why we call it "Artificial Stupidity" on this site.

Nowadays, with those strapped budgets of cities and counties, having to pay for those promised high pension benefits, oh, and the $80,000,000 sprucing-up of the libraries and the building of new stadiums, they just don't have that extra money for fixing pot-holes, much less repairing signs! It doesn't help to be fairly close to a university - gotta spruce up that dorm-room wall or take a souvenir of the good times back home upon graduation, right? Who HASN'T taken a road sign? Come on, fess up here. There SHOULD BE enough money in a city/county budget to replace those signs lost to rust, students, and plinkers.

Yet, if the assumption is that Americans have lost their old navigation skills, then why replace any signs? There are probably many drivers out there who would believe their GPS over a street sign as to where they actually are at the moment. If the phone says "this is not your beautiful house" then, hell, maybe this is NOT your beautiful house.

Per the song referenced up top, would it be better to have fewer signs around? I'll have more to say on that song in another post, but, nah, the other signs that are nothing but annoyances, the "800-SUE-THEM" billboards and 100 ft. high Golden Arches, will still be there. The useful ones for those of the old school navigation, as in knowing where the hell you really are, may just never get repaired. We'll all absolutely need those pieces of electronics to get where we're going, or really good dead reckoning, one.

What better time to get that souvenir, for me, the 1100 block of Stupidity Lane.


* Yeah, it really should be "Ded" reckoning, as the "Ded" is for "Deduced". However, it's been written as "dead" for a long time, which, conveniently, made for a great title for an early-1980's 2-record acoustic Grateful Dead album (songs from it are featured here, here, here, here, and here. What can I say? It was a GREAT ALBUM!)

** In the not-really-THAT-old days of flying, this would mean getting down to 500 ft off the ground to read the town name on a water tower.

*** I'll give her some credit. She doesn't use if for many of her normal destinations, after a few trips, and she can read a map at home if it comes down to it ... but WOULD she?

" ... to DO that vexing."
Moderator
PS: I'm glad I could help on the reckoning thing, B.C. I deduced (pun intended) that one a while back.

I've seen what you describe with the signs many a time too. Sometimes I think the pole just got twisted around, or is it those meddling kids, again? Yeah, that's what I say - "I know WTF street I'm ON!", as I try to look around the corner for what the name of the road I'm crossing is.

Lastly, our bond election was fairly close, but we're past the tipping point with those not paying anything in (or paying - via sales tax at least - but not getting the concept) outnumber those of us who are more responsible (you read that post - the libraries were JUST FINE before.)

Our goal is to due that vexing. If we don't vex 20 people a day, Peak Stupidity will consider itself a failure - so keep those comments coming!
BernCar
PS: I have always wondered why it was called "dead" reckoning. I kind of figured it was because it had gotten so many people killed. It always had the connotation of "uh-oh, the gizmo's not working and we can't see the stars, so we're going to have to use dead reckoning. We're in the deep stuff now." Thanks for clearing that up.

Also, I keep finding cities where if you're lucky enough to see a street sign, the sign is not oriented as you described, but at 90 degrees to that, so that as you approach the intersection, the sign will let you know what street you're on, but not the street you're approaching. Seeing as how I'm a little stressed looking for the right street in crowded traffic and being tailgated by a lady on the cell phone, it is a pet peeve of mine.

And furthermore, I followed one of the links to a previous column and saw a reference to a library bond referendum ($80,000,000 sprucing up) which reminded me of a big burr under my saddle--our local library bond election, but I won't get into that now. This happens a lot reading your blog--sometimes I get two or three links deep and find something to vex me at every level.