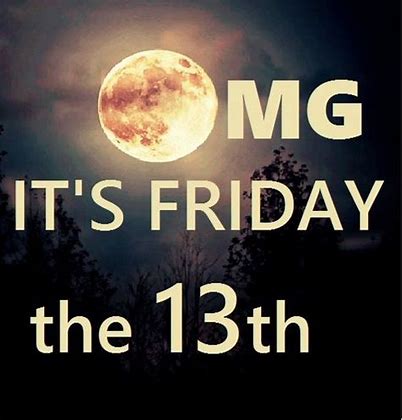 I wrote this because I didn't even think about this superstition until late in the day, and also due to having though about the fading of this triskaidekaphobia over the last few decades. Nobody seems to care anymore. Hotels have 13 floors (though you can't open the windows anymore, so that probably helps), airports have Gate 13's, and airliners have row 13s. What, people, you think 13 can't get you anymore?

It's a good thing and separates us favorably from the Chinese. They still don't like those "4"s (the same sound with a different tone means "die" or something). and they get a bit too excited about "8's. So, Chinamen, don't go eating those moon cakes on the 4th of the month. They suck anyway, and I'd rather have my moon pie, chased down with a chocolate Yoohoo, even on a night like tonight.

There are only a few hours left, so, people, just in case, BE CAREFUL OUT THERE.

Moderator
PS: They've got it pretty easy now, for now, that is, Bill. I'm sure the mechanical ability present on a 5,000 man A/C carrier wouldn't hold a candle to what you had on those diesel boats either.

Right now, the sailing date is probably based on some spreadsheet that keeps track of women crew member's periods, rather than a superstition.
Bill H
PS Sailors are very sensitive about Friday the 13th. It goes back centuries, so far back that nobody actually knows the origin, but that doesn't keep us from taking it seriously.

My ship had been in port for several weeks once and had sailing orders to get underweigh on a Friday the 13th. We didn't make it. Some mysterious malfunction in the engines, or maybe it was the batteries, prevented us from leaving port until Saturday. The Captain was not merely complicit, he was the instigator.

This was a long time ago, in the days of diesel submarines. Probably wouldn't happen today, but then we don't have a real Navy today. We have sailors on the bridge who can't cope with helm orders and engine orders at the same time.