In the beginning, there was Pong, and it was Good, or pretty decent anyway, after the best one could do with computers before was to play battleship with ASCII characters or something ... Really, the sound was noting but a beep every bounce, but you could get those unexpected shots off the edge of the paddle and try to put spin on the ball - I don't know if that was ever programmed in, though, but, gosh-darnit, we used our imaginations back then! Was it worth putting it all into a nice wooden stand-up cabinet and having poor 1970's teenagers put in a quarter a pop? Maybe.

Things would get a lot better with advances in technologies: 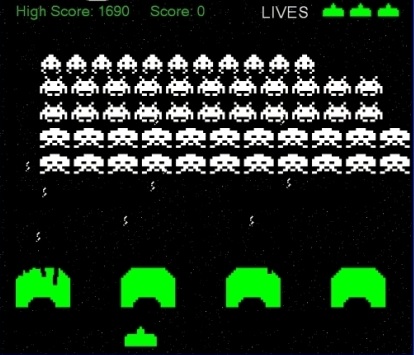 See, you had everything, some type of spaceship sounds, the sound of your ship's cannons, a great concept of no more ammo loaded till you hit something (that was used in lots more shooting games), and great suspense as these aliens got closer and closer. It was my kind of game, that Space Invaders, along with the spin-offs, your Galaxians, Galagas, and that one where the whole screen would turn red (Defender, I got it!) and the poor aliens would radio out "Sos, sos, engine trouble" (that's exactly how our friend would pronounce it, as he was neither familiar with the sailing world nor Morse Code, haha!) How could you improve on Space Invaders, really, when you think about it?

Asteroids was a simple vector-graphics game for which the designers did so much with what they had. "Vector graphics" was old-school, in which the CRT beam would trace out only what was to be shown (monochrome of course) to save computing power/speed over the "raster graphics", as with a TV. That let one just make outlines, and, in Asteroids your spaceships were just equilateral triangles, while your 'roids, as we called them, were polygons. You would push one button for bursts from your thrusters to move forward, and two other buttons would spin you either clockwise or CCW. Another was for shooting. 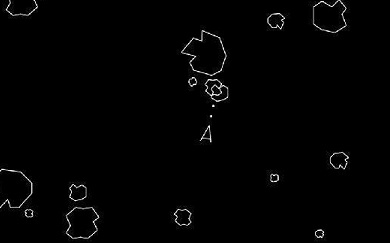 What they did with that simplicity was make a very good game. Now, since they had the big cabinet, why not put a big woofer in there for that big rumbling sound you'd get when you busted up a 'roid? Great stuff! The rules were simple, but that didn't mean it wasn't exciting. As more and more of those rocks came at you, you had to bump the thrusters, spin this way and that, and try to avoid getting hit by the rocks created. Eventually you lost.

Listen, in the early 1980s, we didn't know America was being ruined all to hell, so we figured we'd be in Space more regularly soon. This defending of Earth from aliens and shooting up dangerous objects in general was probably gonna' be an important skill in the near future. It all made sense, these games. Why you just get another shot only after making a hit never really conformed with reality though, but it made the games require great hand-eye-ear coordination. We were gonna need that, come the aliens. We had no Earthly idea that they were not going to come from above, but below the Rio Grande instead. I mean, who knew??!

Next came your Pac-Man, then (yes, we'd been through the 70s) Ms. Pac-Man. Let me get that straight - you'd eat dots up to move up in the world with your big Pac-Man (or woman) mouth and eat some fruit to turn your tormentors purple to give you 15 seconds or so to eat them instead? OK, I didn't see a connection with anything practical in the Pac-Man games, but at least the simple rules and speed increases with more playing time made them challenging.


Then came Mario, and it all went to hell for me. 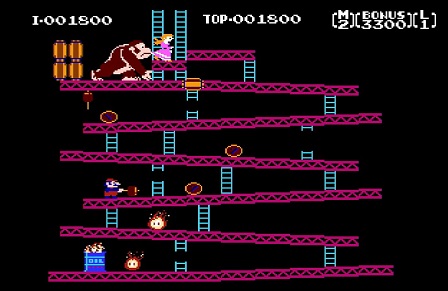 The name of that first game of this type was Donkey Kong. OK, no donkeys were involved, as I recall, and was Kong that gorilla? Nevermind the dumb name, but it's the point of this one that to me marked the era of video game stupidity. It's not like those old games had a chat window to a live help-desk manned by a guy named Josh in India. There was no one to ask this simple question: Why do I want to hit my head on some bricks to get points? What is the meaning of this?! Really, I mean, of course aliens are likely out to get us, so we need to be able to shoot them quickly and accurately. Asteroids can be quite the menace, so breaking them up into "billions and billions" of little pieces makes sense ... uhhh, I think, though I'm no Carl Sagan. But, c'mon now - hitting your head on bricks?

See, that wasn't the half of it, though. The problem with lots, or really, MOST, of games since then, is that you have to memorize. You find little tricks that you can only know by putting more quarters in (ahhhaaa, I'm starting to really hate marketing people), as each new game is for learning more tricks. Eventually, one knows the stupid secrets (yeah, throw some rice at that monkey over there and get sent to a new level) that enable one to play for longer. The Mario Brothers* games pushed this concept, and it took off in thousands of other games since.

I do not like that whole concept! In my opinion, a good video game has a few simple rules. You play longer by getting quicker and more accurate. Your fingers KNOW what to do before you can think it, and that is that beautiful "work flow" they talk about. It's such a great feeling to be in the middle of it. No, no memorization is needed. It'a all hand-eye coordination, reflexes, and endurance.

There is no need for new versions or improvements even. A good game lets the player try to get faster and faster, with no limit - you're eventually gonna lose, but man, what a rush! My favorite example has been around for at least 3 decades, and that is Tetris. I got pretty good at it at 2 points in my life, and the first time it got out of hand. I remember that I would go to sleep at night only after rotating shapes around and dropping them in, for about 10-15 minutes. That kinda' scared me, so I quit cold turkey. (To be clear here, I mean I was not playing the actual game but just fitting shapes in in my head until I got to sleep.) The 2nd time involved a slow computer, which after holding me back from some good moves, ended up with a twisted keyboard. Again, cold turkey!

* If not for that stupid illegal Italian immigrant Mario and his stupid immigrant hat, we'd have not had to deal with any of this.

Moderator
PS: Ingenious stuff, Rex. All I could manage was to knee the KISS machine in the right spot to both get a credit to ring up (CLACK!) AND have a quarter come out the return. Plus, I could kick its ass anyway.
Rex Little
PS When they put pinball machines in my college dorm's rec room, we developed quite a few tricks to cheat them:

1. Pry open the back panel just enough to stick a coat hanger through the gap and turn the free game wheel (pinball machines were still mechanical back then).

2. Drop a penny in the quarter slot (a quarter bought three games in those days) with just the right amount of spin. Usually it would just come back in the coin return tray, but once in a while it would fool the detector into taking it and giving you three games.

3. Solder a wire to a quarter so you could pull it back out after the machine "took" it.

4. One machine had a gate which could be held open with a magnet on the glass above it. This let you shoot the ball through the gate. It would run over a track which gave you points, then you'd catch it on a flipper and let it drop. Since it hadn't hit any bumpers, the machine didn't count it and let you shoot again. Rinse and repeat until free game.
Moderator
PS: Pinball was REAL, man! It took a little elbow grease to bump the machine right. Once, when the tilt sensor was broken, we had a big guy just move the front of the machine up and down for us while we "played that silver ball" to our heart's content.
BernCar
PS: To paraphrase Picasso, after the pinball machine, all is decadence.
Moderator
PS: Thanks for that explanation, Rex. It was only while writing this post, what 35 years(?) later, that I realized that name made no sense. Back in the day, we were too amazed at those graphics to think about it, I guess.
Rex Little
PS I'm not certain of this, but I believe the original Japanese title of the Donkey Kong game contains a word that's pronounced "donkey" but means something entirely different. For some reason, when they brought the game to an English-speaking audience, they just Anglicized the spelling instead of translating the word.