No, we are ABSOLUTELY NOT referring to the memorabilia removed by Gerardo Reviera from the dressing room of ex-Monkees Davy Jones! Please ... stop ... we have been besieged by Monkees fans since the beginning of this blog ...


Pretty Carbon-neutral down there at 20,000 leagues: 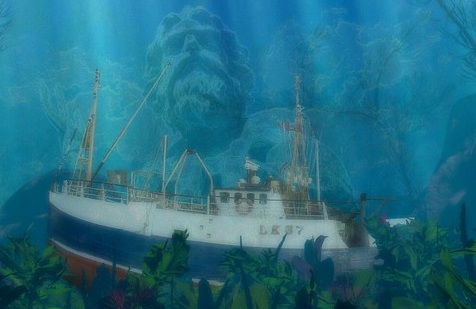 Once again, Peak Stupidity has not kept up with even some of the more egregious acts of stupidity affecting the planet (and we've only got one, we've just learned. Apparently, there is no planet B. Damn.) Lately, it's this admitted "on the spectrum" (and I don't mean just vitamins) young lady named Greta Thunberg. Well, she's on all kinds of spectrums, infrared, UV, you name it! However, being a young Swedish lass, we probably should listen to her warnings about the climate of our planet. No, I really don't want to get into the argument again in this post today - it's just too tiring and takes too much carbon out of my system.

When I first heard about young Greta's voyage across the high seas of the north Atlantic, well, her being a nutcase or not, having done a bit of sailing back in the day, I was very impressed. Then I learned some more today about it. This was no single-handed voyage or a trip with her Dad. She had 2 skippers doing the actual sailing. Reports don't mention anything at all about a Boatswain's Mate responsible for keel-hauling young Greta as punishment for any climate transgressions en-route, but that's a possibility, meaning even more manpower.

The Malizia II is a 60 ft. serious high-speed yachting ship. There are more stable and steady boats one could use for a trip across the north Atlantic. 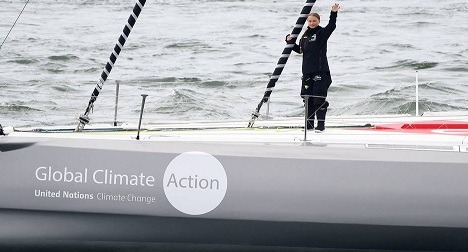 Greta Thornberg, this teenage Swedish girl, thought it important to attend a conference at the UN (still in America, damn-you Donald!) via travel on the yacht Malizia II, rather than via steerage on a 767 or A-330. That's a nice symbolic gesture, but, see, the crew must be sent home, and another crew flown over to bring this yacht back to the east side of the pond. I read 6 airline tickets were involved. Besides the skippers, let's not forget tickets for the Professor, Gilligan, and the Howells, and then there's Lovey's wardrobe (drop-shipped outta New York, maybe?) No, Mary Ann and Ginger won't be going back - why even ask?

Does Greta, or much more importantly, anyone else on the Planet (Planet A, that is), really think that we should all travel by sailing ship now again? I know people used to do that, but we switched from sails to steam to coal to diesel and now mostly Jet-A for the last 5 decades. Close to 90 MILLION passengers cross the Atlantic by air each year (just to the US). (Granted these numbers may include lots of duplicates, but that doesn't affect the argument here.) Could they really all cross by yacht instead? Hey, some people do take cruises now all the way across, but those big ships burn a whole lot of fuel, what to carry the swimming pools, putt-putt courses, on-deck race tracks and the 100 yard long food bar. This stuff's not light, people!

Then there's the Pacific travel. Tourism is big bidness. Whaddya' gonna expect these modern tourists to take the slow boat from China?

Nope, this is pure symbolic stupidity here, even if you DO think that all this travel is responsible for warming the whole planet because you have some sort of working mathematical model that the rest of us have not been privy to.

I've got another post to write about this Greta and the stupidity of Swedish Socialism. Speaking of yachts and weirdo's of the white race, let's hear from Regatta de Blanc*:

Perhaps 20 years from now (depending on who you believe) we'll find that bottle off the coast of Tennessee come the climate change and ocean's rise. Contained in a piece of the Malizia II's sealed finest glassware we may find nothing but pint of Greta Thornberg's pee, as she tossed it overboard instead of submitting to the Skipper's "random" drug screening, which would have otherwise resulted in another keel-hauling.

I'm telling you, though, most people feel just a wee more comfortable up at 37,000 ft in that B-767, eating re-named Chef Boyardee and playing Bird v Bird than ON the high seas in a sailing vessel ... just sayin'. The sailing is at times dangerous, and I want young Greta to avoid Davy Jone's Locker, as carbon-neutral as it may be.

Oh, crap, Davy Jones again. Will you fans EVER leave us alone?! OK, here, now no more sending in emails of your panties:

I just read that 2 of these guys have died, Davy Jones, the hearthrob (least according to Marsha Brady) in 2012 and Peter Tork just this year.

* Yeah, we gave Sting kind of a hard time in the long-ago post Of course the Russians love their children, you dumb bass player!, but you do need to hear that great bass guitar to enjoy The Police.

Moderator
PS: Well, I'm sure she'd tell you, Bill, that if 175 of us (or ~ 300 for a widebody) ALL sailed across the ocean for our business meeting or trips to see the Coliseum, then that'd be one less flight each day.

We still would have the problem of getting our sailing crews back and forth, but she is a teenage girl, and this is emotionally VERY IMPORTANT, so let's not concern ourselves with details, while we're in the middle of saving the FREAKING PLANET, man!!
Bill H
PS Okay, seriously. Taking a sailboat instead of flying to avoid contributing greenhouse gasses. Did they cancel the flight of a 757 because she was not on it?