Salisbury, Rhodesia, back in the day of the White Man's rule: 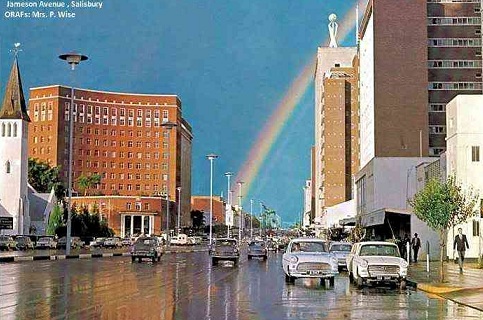 From a very interesting and readable site called the Law Dog blog, I came across an honest obituary of the black murderer/tyrant Robert Mugabe. He not only murdered people, but a whole country, the country of Rhodesia. It had been run by white men and been the former "bread basket of Africa". Robert Mugabe's Zimbabwe is known mostly for the stealing of the white's productive land, murders of white people, and, just after that, an inflation rate not seen since post WWII Europe.


Zimbabwe - never mind the still-remaining infrastructure, it will revert to Africa. 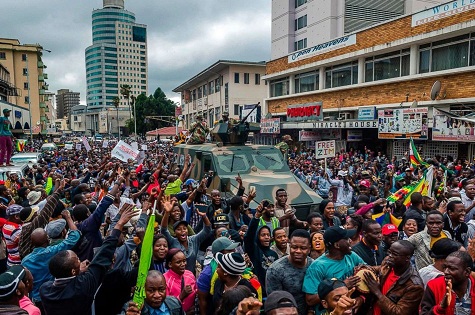 That is, unless the Chinese kick some ass there. We wish them well.

The blog post starts with a great Mark Twain quote. He sure had some good ones:

Mark Twain once said:
"I have never wished a man dead, but I have read some obituaries with great pleasure."

I did try to contact Mr. Lawdog in his comments section, with the anonymous option, but without Facebook or some such crap, it didn't take. I hope the author doesn't mind my posting this verbatim then. It's good as are his and other writings* I've seen just now.

Now this is a real, honest obituary - none of that not-speaking-ill-of-the-dead claptrap:

Sod that quote for a game of soldiers.

You were a degenerate, fathered by a rabid cane-rat upon a syphilitic warthog; whose only genuine claim to fame is not having the common decency to catch a bullet with your face in 1975.

You took the gukurahundi, and you gave the rain blades, and hate, and fire, then you set it loose in Matebele-land. 80 000 Ndebele butchered, mostly unarmed civilians.

I hope the screams of the tortured, the wails of the dying, and the keening of the grieving families strips the flesh from your ears.

You whispered to that murderous bastard in Pyongyang, and gave him rapists, and murderers, and oath-breakers, and he sent back the Fifth Brigade, whom you set against your opponents, and journalists, and men of peace. How many thousands did the 5th drop down the mineshafts? How many were lucky to be dead before they hit bottom?

You cursed them to remain, mourned, but un-buried by their kin. I hope they drag your screaming soul into the bottomless dark.

You sent flame-throwers and guns to Chikurubi, and hours later one thousand, two hundred prisoners were slaughtered. For what?

I hope you spend eternity choking on oily smoke.

You took the bread-basket of Africa, and you starved its people -- hundreds of thousands of them -- for your own gain. Then you set bulldozers against the slums you created to "Move the rubbish", grinding the shanties and the starving under the treads.

You were less than an animal, you leprous buffoon. Your clan should cut off their genitals for the shame of having borne you, you shadowless thug.

The only grave you deserve is a septic tank, and the only respect due your remains is to be dragged out of the feculent excreta by starving hyenas years in the future, to have your empty skull repeatedly sexually violated by diseased jackals.

Burn in hell, you miserable, oath-breaking, murderous, sack of offal. I hope the dead you created pound pineapples up your arse for the rest of time.

So as not to confuse our readers with the Topic Key The Dead, which has been only applied to posts with Grateful Dead music embedded, well, we'll just have to embed some. In this post, I also refer to the grateful feeling many in Africa may have due to the death of this man.

For the white people left in Zimbabwe and the south of Africa in general, here is Sugaree, played by The Dead at the Capitol Theater in Passaic, NJ around Thanksgiving time in 1978 (please, any commenters with better versions, put a link in, and I'd be glad to switch it out):

You thought you was the cool fool,
never could do no wrong.
You had everything sewed up tight.
How come you lay awake all night long?
Just one thing I ask of you,
it's just one thing for me,
please forget you knew my name,
my darling Sugaree.

Well in spite of all you've gained,
you still have to stand out in the pouring rain.
One last voice is calling you,
and I guess it's time you go.

Well shake it up now Sugaree.
I'll meet you at the jubilee,
and if that jubilee don't come,
maybe I'll meet you on the run.

Just one thing I ask of you,
it's just one thing for me.
Please forget you knew my name,
my darling Sugaree.
Shake it, shake it Sugaree,
Just don't tell them that you know me.
...
...

* Just from perusing the site, it seems that the blogger used to post a time or two weekly. He has slowed down recently - is he in the middle of suing somebody? Uh oh.

Moderator
PS: OK, thanks Dtbb. Yeah, I'll have to go back through the site, when I'm looking for fun reading.
Dtbb
PS:Lawdog got a promotion to running a jail down in Texas and cut into his posting I think. Man is an hilarious storyteller.