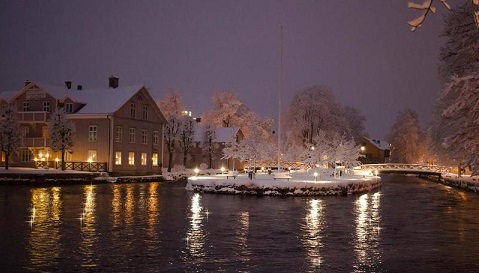 From random readings of ZeroHedge, we come up an article entitled simply Swedes Are Fleeing. Peak Stupidity has ranted on the problems large-scale immigration of Moslems has been causing in Stockholm, including equal numbers of people from opposite sides of foreign wars! From what I've read, the big city Malmö is more of a lost cause.

This ZH article, however, is not about the ruination of Sweden's big cities, but is about a small "idyllic village" of 10,000 people called Filipstad. You've just got to read the numbers:

Between 2012 and 2018, 640 native Swedes left the town, and 963 foreign-born people moved into the town. Those leaving are people of working age (20-64), which means that the municipality's tax revenues are shrinking, exacerbating town's financial crisis.

This is 1/10 of the town being replaced, nearly person for person. OK, that's only a minority still, one may say. It doesn't work that way. These newcomers will swamp the system while they have lots of offspring, as the older Swedes just die off. This is pure population replacement of the town of Filipstad.

"In Filipstad, there are around 750 adults from Syria, Somalia, Eritrea, Afghanistan and Iraq.... In this group, unemployment and dependency are very high, while education levels are very low. This group runs the risk of ending in an eternal exclusion that is already heavily burdening the municipal economy."

Hultgren explained that many of the newcomers do not have the qualifications to enter the labor market.

"[They] are maybe too old and illiterate, or have a very low educational level. We must accept that there will be some people who will need the support of society for their livelihood."

According to the documentary, unemployment is at 80% among the non-Western foreign-born residents of the town, even while the town is suffering a severe lack of teachers and nurses. In ten years, Filipstad's expenditures on social welfare have increased 200%

Socialism and mass immigration REALLY don't mix - that is present day Sweden. The use of the word "crisis" is bugging me. It's one thing to call what's happened to the town of Filipstad a crisis - it's about beyond that, even. However, the reason these people are here is because many Swedes and their government CAUSED THIS TO HAPPEN. Their causing the crisis of today was not a crisis in 2015 - it was a steaming piece of massive stupidity!

About this story, it is not a ZeroHedge original, but originated from the Gatestone Institute, a neocon outfit from what I read on their site - it's one thing to not like large numbers of Moslems being in YOUR COUNTRY, but, from the links I see, the Gatestone people want to destroy Moslems in their own lands. What is it with these Neocons? Many are the ones that encourage both parts of the "invade-the-world/invite-the-world" policy. Are they having second thoughts about the latter?

The destruction wrought by the Neocons has got people fleeing all over the place. Join the party, Swedes.

Moderator
PS: Of course, yes. Write it up - I'll try to edit (easy on someone else's stuff!) and decide how many posts it takes up, if more than 1.

Put in a comment on a very recent post (though I will catch up to one anywhere), with the details. We can do it (I know, kind of lame) where you paste it all into these boxes when you're ready, and I'll save them, then delete the comments.

Thanks again.
Ganderson
PS Achmed I can still give you a travelogue- if you’re up for it.