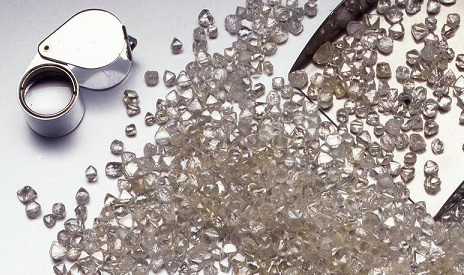 Peak Stupidity wrote a 3-part series of posts (Part 1, Part 2, and Part 3) 2 years ago called "You've got a friend in the Diamond Business". These discussed the great expose, written in the late 1970's, by one Edward Jay Epstein of the entire diamond De Beers monopoly scam business, from mining to retail. The post's (and this one's) title is in reference to one of the jewelry chains market pitches.

Zerohedge had an article on this business past Thursday saying "Global Diamond Glut Crashes De Beers' September Sales". Per "Tyler Durden", "The global diamond market is in a crisis, currently reeling from oversupplied conditions as demand from consumers evaporate." It doesn't sound like Zerohedge's often-seen hype:

De Beers' Sept. sales totaled $295 million of diamonds, a 39% YoY drop. The latest collapse in sales from the world's largest diamond miner is a continuing story from summer.

Last month, we noted that De Beers sold just $280 million of diamonds in Aug., compared with $503 million in the same period a year ago, which represents a 44% decline.

"The current malaise in the market is due to oversupply," said Paul Zimnisky, an analyst in New York, who said diamond buyers had too much inventory.

Most of the lackluster demand for the rock is coming from the world's two largest diamond-consuming countries, the US and China, which has fuelled uncertainties for the overall industry.

Suckers, the both of them! If you want to know why Peak Stupidity is so down on this "industry", please read the 3 posts linked-to above. The gist of it is that, over most of the last century, men of the developed word have been pushed by women who have been pushed by DeBeers/Hollywood marketing to buy these worthless* rocks, in order to get properly married. (I personally WAS involved, but got off pretty light, as these things go.)

As usual, the ZH commenters don't disappoint. You must click on a box to see comments, but I'll include a few first-glance favorites:


Peanut Butter Engineer: Diamond Advertisement was came up by a man to direct towards dumbass men like you. Women were pretty happy with gold but idiot men decided to buy diamonds instead. Go blame this on fucktards like yourself.

I'm not sure why he was so peeved at the first guy...

djealas: THis is old news. Debeers have been stockpiling diamonds for years, and marketing the fancy colored diamonds as a new way to raise revenue. Yellow and brown diamonds were once considered the garbage of the gem world, now they're rare and exotic" and prices are insane. Plus the new market for artifical diamonds, a millennial's best friend, are driving prices down for real ones.

I considered getting a 1 carat flawless recently because the price was incredibility low, but heard the words of my long dead father "she won't last forever, why buy her a diamond?"


Able Ape: If it's ok to have fake tits what could be wrong with fake diamonds...? Yeah, nothing... De Beers better diversify and get into breast implants - with each pair, get a fake diamond...!


disagreeableness: I buy my diamonds at the pawn shop, but too, I find my women at dive bars. A sound strategy I think


We are hoping it gets worse for the implementers of this century-long scam. Remember young people: You can always try the blood-diamond line. Depending on the SJWness of the young lady, she may just buy it:

"Yeah, I think I should get you a ruby instead. Sure, they're, cough, cough .. a little bit, cough, cough, cheaper, but they come from different African countries where all the miners do is kick the ever-lovin' shit out of each other."

* No, they are not comparable to gold and silver because they can be, and are, made by man with just as good quality.

Bill H
PS Yes, if they said that oversupply depressed prices, that would make sense. But the article said it was causing fewer people to buy diamonds, which is weird.

There are some places where supply affects prices, and some where it does not make sense for it to do so. I can see a bidding war for diamonds, "Hey, I can get it cheaper down the street," but gasoline?
Moderator
PS: I don't know, Bill*, what they mean by weak sales - lower amounts sold (as you say, it doesn't make sense) or less for each diamond (makes sense) resulting in a lower sum taken in by this one-and-only supplier.

With the steaks, "Our grocery store has steaks on sale for less due to a glut, meaning more competition to get them sold. I bought a couple extras to put in the freezer." This is more like it, and, your example does indeed make no sense.

* and, of course, caring squat-all about this market personally, I don't care to find out.
Bill H
PS "A diamond analyst last month said markets remained oversupplied, resulting in weak sales from the miner.

The "law of supply and demand" again. This one a slight variation, in that oversupply is not driving prices down, but is causing people not to buy. "I went to the grocery store to get a steak yesterday, but there were so many steaks in the counter that I went home empty handed." Right.