This and the previous post most likely come under "stuff I already know" or "no duh!" for the reader, so I apologize if it's boring. I just want to be complete on this topic, with a discussion of it all on the last post.


Slow day at the Coliseum - "Circuses" in Roman Times: 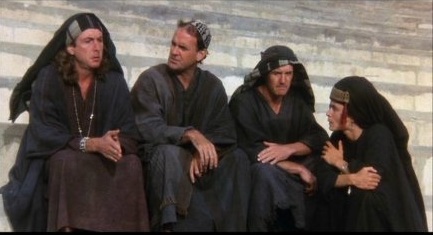 Yeah, I know, that was Monty Python (The Life of Brian).


The "circenses" half of "Pan et Circenses" refers to entertainment of the masses of regular josephem, not just by shows of animals and feats of daring. It meant entertainment of any kind to keep life from being too dull and full of drudgery and to give them enough to think and talk about, in order to avoid any deeper thoughts and resulting action by the people.

The Romans had circuses all right, in a big way. As Peak Stupidity reported from our tour of the eternal city (here and here), before we snubbed the so-called Pope and his Vatican City, we had seen the big Roman Colisseum. It is pretty damn impressive, rivaling a medium-sized college football stadium today in seating, but without the built-in beer-cup holders. The events that went on there may seem barbaric today, but it's probably just because they are against the law. Once can watch pro boxing, MMA, cockfighting, etc., and see something of the same. Interestingly, a Ringling Brothers and/or Barnum & Bailey circus would have been pretty mild in Roman times, had they pulled it all off, but now, we are too civilized apparently to have old-fashioned circuses anymore (or it it that the modern announcers are all afraid of clowns?) 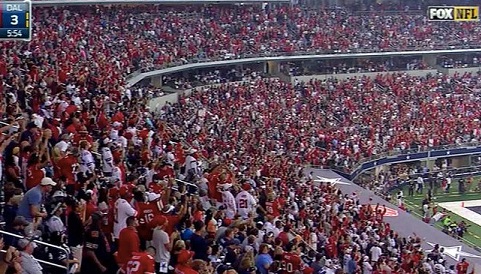 The football arena is the best we've got today. Guys smash into each other, but only occasionally get hurt badly in front of us (the serious damage is long-term). Since things seem harder and harder to look up on the search engines, I was just trying to estimate how many people are in attendance on a college game day. For an average of 5 big teams per state, with 1/2 playing at home, let's give it a minimum of 100 games at these big stadiums holding, say 80,000 apiece. I would say 5 to 10 million people are AT the games. (Adding NFL would give you another 16 x 80,000 = 1.2 million, so let's keep it in that wide range.)

Then, there are college and pro basketball and baseball, less-attended sports, monster truck rallies, drag races, NASCAR, ... it goes on and on. There is no shortage of this type of entertainment. The Roman Emperors could only have dreamt of having the varied and greatly-attended circenses that America has to keep Americans entertained and distracted.

I didn't yet mention the order-of-magnitude more amount of entertainment from these same "circuses" brought to the viewers over the TV. Of course, the Romans couldn't have imagined this, and more so the 24/7 ESPN-n (where n is a channel number ranging from 1 through 3?) discussion of what exactly happened well and what went wrong during last weekend's circuses, what will likely happen next game, and the man-crushes or lamentations of the announcers.

Let me continue with the media aspect of our modern "circuses" portion of the "Bread and Circuses" next post. I want to put something funny up in a bit.

Moderator
PS: I know there are people watching those Blue-squad debates, but it's just another show (just as a Red-squad one would be). People are too distracted by that to, say, read VDare, unz articles, etc.
Moderator
PS: That's coming in that next post,Bill. My point will be that, even the folks that make an effort to keep up with politics rather than just the sportsball, are watching one another type of circuses. CNN is Exhibit A!
Bill H
PS You left out the government, things like debates, but I suspect that was on purpose because you know that nobody is actually watching that stuff.