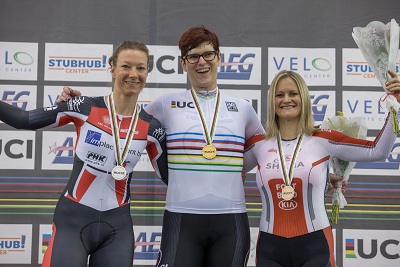 Hold the spandex, I beg of you!


How can one refrain from noting the stupidity of the current era? I mean, you really need an outlet through which to dump it, or this stuff will rub off on you. Peak Stupidity today revisits the flavor of stupidity that we categorize under Genderbenders. We coudn't NOT comment on this one.

Per Zerohedge*, Male-To-Female Professor Wins Women's Cycling Championship Again, Taunts Female Critics. Haha... hahahahhaaa! Sorry, it's not just the stupidity of it. That was a "funny haha" along with a "pass the popcorn haha".

As for the first "haha", we non-deluded people all know that men are physically stronger and faster than women on the average. There is a reason most sports have us separated by sex. Though this bike champion may have different sexual organs than he had before getting tenure, that does not take all that made him a man away. Though I would be pretty pissed being a serious (actual) woman contender in this sport, or Dad of a cyclist daughter, I'm not, hence this is just hilarious to me.

As for the 2nd "haha", see there may not even be a long German word for this one. This is a 3-way collision of political correctness, genderbending, and also feminism. The feminists started this Fed-Gov Title IX crap many years back. They wanted just as much money to go into female sports as male sports. Since women don't take sports as seriously as men, the effect was to eliminate lower pay-off** men's teams. No, it's not right, and it's just another reason for young men to be pissed off at Big Government, if they have any sense.

Then, this newcomer to the world of stupidity, the genderbender (BLT-G) crowd, may not be feminists (in fact, they often do not like each other, as they are competing for the same goodies - yes, "goodies" of all sorts!). The genderbenders don't care about equal money into sports, but dang, if there's prize money to be had, what can people say if a former man, now "woman", enters the women's 35-39 y/o division of a bike race? About this controversy, tennis player Virginia Hood says:

The male body, which has been through male puberty, still retains its advantage, that doesn’t go away.

I have sympathy with [transgender athletes]. They have a right to do sport but not a right to go into any category they want. [Zerohedge's bolding]

Here, the genderbenders are using modern hard-core Political Correctness to muscle their way into easy wins, money, and fame. Where does the feminism come back in? Well, what can these feminists say, because, after all, women can do anything men can do, right? Hear them roar! The feminists have used the PC as a weapon for decades, so they can't exactly fight it here.

Since women are supposed to be just as good, in say, cycling, as men, then even if this tranny guy now-named Rachel wins every single road-race of the tour, what difference does it make that he does have a little bit of testosterone still not flushed out of his system?

If this goes much further, women will be losers in every one of those Title IX sports, pretty much negating the reason for another bit of unconstitutional bullshit that the feminists got out of the Feral Government. They won't have a chance against these guys with no pee-pees and women's names. I don't think feminists are too awful pleased by these developments, but then, they started all this "we are all the same" stupidity.

As the old-school ZH commenters were bound to tell you, "go long, Orville Redenbacher!"

OK, "ladies", get on your bikes and ride!

I hadn't listened to that guitar ending in a long time, usually wanting to skip to Fat Bottomed Girls (a better melody, IMO) What hard-rockin' guys! If you play Bicycle Race without Fat Bottomed Girls right afterwards, you are some kind of sicko and should be banned from the airwaves, so,

Sure, the first guy was a genderbender of sorts, being a flaming homo, but he didn't insist on trying to join The Go-Go's or something ...

* Steve Sailer had a post on this same story, as he gets into some of the details of different types of trans-gender people, and then ends with "So, a guy with a gut can make a joke out of a woman’s sports competition if he decides to call himself a woman." You're going to find smarter commenters under Steve Sailer, but funnier ones at ZeroHedge. Take your pick.

** No matter what, the alumni would not let football and basketball take a hit. That would be a circus too far.

Moderator
PS: To compete in the latter, you need that hopefully low-cost DNA test, and then the very inexpensive, squeeze-the-groin test. Sounds doable!
Rex Little
PS They could do away with the trans sports issue by just relabeling the categories. Instead of "men's" and "women's", make them "open" and "X only". To compete in the latter, you submit a DNA sample which shows you have no Y chromosome.

The cost of all that DNA testing might be a sticking point, but isn't there a quick-and-cheap test which just looks at the X-Y pair? If not, surely one could be developed for this market.
Test
PS: Test comment.