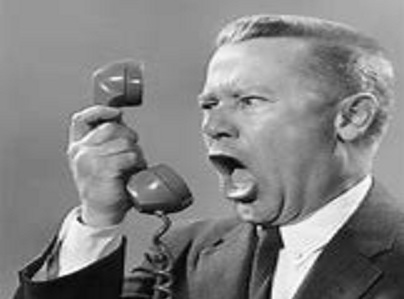 Anybody remember the old Sprint "pin drop" commercial? This had nothing to do with brick oops mobile ooops, CELL phones. Just after the Bell Telephone monopoly on phone service was broken, competitors sprung up to offer long-distance service (we had to pay EXTRA, dammit, and we LIKED IT!). I believe Sprint was 3rd, after MCI, but it's been a while and a bit complicated to look up.

The big Sprint advertising campaign for their long-distance service (10 cents a minute - it was a steal!) was the "you can hear a pin drop" TV campaign. I am not sure if they were better than the other 2 competitors on the costs, but they figured we wanted good clear noise-free audio. Now that's worth having, but then, I don't remember in my lifetime the land-line phone service having anything but trouble-free service, sound-quality-wise. Maybe a commenter or 2 could tell me otherwise.

OK, great. We had a bit of experience with bad signals during the time between old-fashioned land-line phones (they did start to come in all kinds of colors and shapes - like, say a red Trans-Am at least) and the time of ubiquitous cell phones, say 2003. By the end of the 1980s, there was the cordless phone. These things had a base that plugged into the land-line signal 4-conductor cable, but also to AC power at the socket to allow it to be a radio transceiver. A battery-powered handheld transceiver had your mike and speaker, and you could carry it around the house and even into the yard a ways. How cool was that? It's when we first ran into the whole "can you hear me now?" business, least in my household. (One time, I even walked outside simultaneously with a friend who lived one block away, as we both tried to see how close we could get and keep talking.)

After this, you had your cell service of varying quality. We didn't expect much more than walkie-talkie quality at the start, but things got better quickly. Verizon advertised its quality signal with their "can you hear me now?" ad campaign. Yeah, sigh, I still watched the idiot box back then.

After that little history of phone service in our lifetimes, let me get to the curmudgeonry here. Things have gotten worse. I've switched cell companies a few times lately, and none of them give clear signals everywhere they purport to HAVE a signal to begin with. I call friends and have to ask them to repeat stuff, the worst being when I lose about every 20th syllable in a regular fashion. One guy has to hold his phone just a certain way, at the house. This is not what I would have expected by 2019 in 2003.

The big network companies are doing all kind of tricks to keep profits increasing. Good on 'em - productivity increase is good. However, these tricks don't all work. The companies definitely LUV LUV LUV you to use your wi-fi, as they takes the burden of your service completely off their backs. When you don't, there are electronic methods that I don't even know the names of that help them get more data over the same hardware.

Come to think of it, www information, especially video, of course, is the big data suck, so you'd think the simple voice signal would be peanuts. When I think of that, I think of this whole texting business too, as the opposite situation. When it was just words, (not really the case anymore, though) the cell companies LUVED LUVED LUVED that too. Instead of sending so many many kilobytes of data per second to keep the voice quality reasonable, when sending text, you're spending 20 seconds sending 50 bytes if you're good! Hell, the telegraph could do better than that. This costs these cell companies just about... let me pull out the calculator ...approximately the square root of squat, in signal capacity.

You wonder why, with all the Megabytes of data being sent to your phone in a few seconds, these companies can't get the voice data coming across well enough to enable that ability to hear a pin drop. Right now, I'd be glad to be able to hear the front door slam. This stuff sucks. 1985 was way better. Of course, now we can talk while I'm talking a dump in the restroom of the O'Hare airport, so there's that ...

PS: I am no network specialist, electrical engineer, or anything like that, but I do have a possible reasons in mind. Is it that the data can be interrupted for short intervals occasionally without the user experiencing a problem, while the phone calls must continue without so anything more than a 10 millisecond or so interruption in real time, for a decent conversation? If so, the emphasis is on data now. They must know, nobody uses the phone to, like, call people, anymore, right?

Moderator
PS: Yeah, I've found it refreshing to reach the other end when it's a land line. At least I've only got to worry about my own connection.

I'll say this for the modern day though, Macumazahn - FREE LONG DISTANCE! (I guess we are all so used to it, but it's only been 15 years or so)

Remember: "Collect call fro Mr. Floyd to Mrs. Floyd. Do you accept the call, ma'am?" "Uhhh, no, I don't, but ... Honey, I'll meet you at baggage claim at 7:30!". CLICK.
Macumazahn
PS I hate cell phones. With a flaming passion. If I ever get hold of a time machine, I'll excise the damned things from the timeline. Deplorable voice quality, laughable reliability, continuous location tracking, audio, video and usage surveillance; all at insanely-high prices - hey, what's not to like about cell phones? I'm old enough to remember when we could talk on the phone for as long as we liked, on a full-duplex connection where the other party could actually be heard clearly. Telco reliability was once the gold standard - my, how are the mighty fallen.