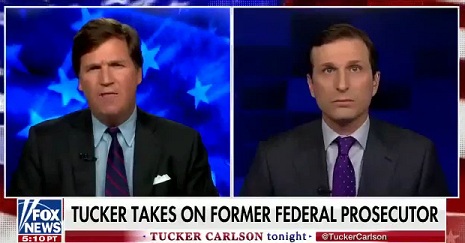 (Nothing at all against Tucker, BTW, just TV political news, period)

Back off the TV infotainment stupidity, is what the title means. I hope the Peak Stupidity readers don't take this the wrong way, even if you are continual "consumers" of the TV (aka, Gov't Media) infotainment for the, probably for the purpose of knowing how this country is getting ruined or just to watch that in real time. Yes, the ctrl-left is has been trying different end-runs to overturn a Presidential election for almost 3 years now. Yes, you may want to know the details.

Firstly, keep in mind, if you are paying for TV, then as far as all the networks that you are capable of viewing, YOU LIKE THAT CRAP. Getting it unbundled is a something that could very easily be done, but I don't think anyone on the other, "broadcasting", end wants that, at least the people REALLY on the other end behind the scenes.

In the Peak Stupidity post Nothing but Distractions from a year and a half ago, I'd seen some back-and-forth TV-pundit discussions on the myriad of details of the attempted impeachment goings-on. This FBI guy revealed this. President Trump was influenced by this other guy. The one guy is under questioning and admitted this other thing. Hell, it had already been going on a while, and now it's 1 1/2 years after that! I didn't give a rat's ass, honestly, about all those details then, and I sure don't now, for the newest attempts.

VDare Chief Peter Brimelow, has written it before, and he just the other day wrote "Democrats Huff And Puff—YAWN! Wake Up When Senate Trial Begins. Then Lock And Load." His point is, and he finally realized ("I now regret that I allowed some 131 references to the farcical Mueller investigation onto VDARE.com..."*) that this impeachment deal is no search for any truth in some wrong-doings that shouldn't be tolerated in high government office (hahaha!). No, the ctrl-left (D-squad AND R-squad helpers) don't care about the details and if anything really wrong happened. They want Trump OUT. I don't even think it's because he's taking action on (or really, mostly blabbing about) immigration control or drainage of the swamp. Nope, They just don't think it's right that the deplorables should even be able to put someone in office who's not down with the narrative. They are not used to this, and they just won't put up with it! The narrative is simply the destruction of traditional America, pretty much what the Commies tried to do in the EXTERNAL Cold War, but this time they have us truly surrounded.

Is it gonna help to keep up with all the details of the latest impeachment business? I have almost no idea of the names involved in this newest thing, the Ukraine deal, besides a Mr. Biden and son. If you are a regular reader of Peak Stupidity, you've gotta know that we are not exactly your latest source of political news. When I do reference any of this, it's usually off of other sites that discuss the politics BEHIND it all, and often the history of these politics. The TV infotainment gets into details that I don't want to know about. We can find out what's really going on - we've got this internet, and we have our knowledge of history, our common sense, and our consciences.

I implore the good reader to back off. Not just a couple of days, but for a month, 3 months, or more, keep off the Gov-Media infotainment on the detail politics. Keep that thing off, period. You will likely be surprised how soon you will get to the point at which you are just plain disgusted at it when you turn it back on at a weak point. (It's a little bit how I feel about the whole internet once in a while, but at least we get to pick your poison here.)

* This partial sentence quote doesn't mean much there, but his point is that the details didn't mean anything - there was nothing the D's had on Trump, but that didn't stop them one bit.

Moderator
PS: Bill H., I see what you are getting at. "Taking turns" is yet another example of the ctrl-left's not understanding stuff that most of us learned in Kindergarten, the ills of Socialism being another that I've blogged about.
Bill H
PS @Rex Little
Turns don't necessarily work the way one might think.

You and I might think that "turns" might mean that you get one and then I get the next one. Democrats don't think that way.

They think that "turns" mean they get one and they get the next one for a female. Then they get the next one for a LGBGT+31 person. Then they get then next one because by then they will have invented a new "diversity" qualification.
Moderator
PS: I think Bill H has repressed his memories of the Obama presidency, and I can't blame him one bit.
Rex Little
PS
Uh, Bill. . . unless I'm confused about which party Obama belongs to, a DEMOCRAT was President for the eight years prior to Trump. If anything, it's the Republicans who should feel cheated, because Trump--while certainly not a Democrat--isn't really one of them either.
Bill H
PS I figured out a long time ago that it boils down to one simple thing. Democrats feel like they got cheated out of their turn. Republicans had the White House for eight years and now it was the Democrat's turn to have it. The whole election was about the upcoming coronation of a Democratic female president, and the voters didn't play fair. Democrats feel cheated out of what was rightfully theirs and are acting like eight year olds at playtime.