California Mourning ... on such a winter's day

More here on that damn ridiculous Bloomberg article - lots of data and graphics, very poor reasoning ... along with some music tonight on, of course, California.

I won't link to the same stupidity twice. I learned my lesson from that mistake in the previous post that this one continues. First a scatter-plot type graph:


Sorry, I couldn't get the size down for the site without losing lots of resolution: 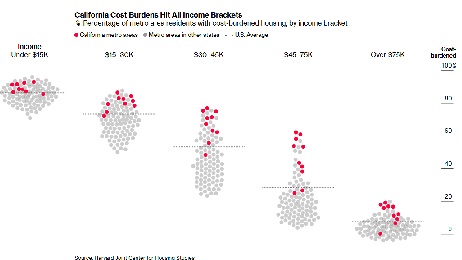 BTW, the graphics are interactive - if you do go to the article, you can hold the cursor over a dot and see what city that is.

Yes, these "journalists", or their IT guys, make some cool graphics. Maybe they should have stuck to that and not written any text - the stupidity comes about in their interpretations of the data. One thing I can tell you, for a household making < $15,000, they are "cost burdened" even for Snickers bars.

Here's a bit from the young and dumb Bloomberg pair of "journalists":

California also has a distinct burden: Proposition 13, a measure approved by voters in 1978 that limits property-tax increases on homes until they’re sold. That’s been a boon for Baby Boomers who’ve lived in their houses for decades and aren’t assessed at anything close to their property’s market value. But it’s especially unfair to their children, who are in effect subsidizing their parents’ generation.

Their children can perhaps be nicer to the parents and inherit the house. More importantly, maybe these children won't vote like normal rat bastard Californiains for every new city bond issuance, seeing as property tax pays for that sort of thing. Unfortunately for places like Idaho, Oregon, Washington and now Texas (per the Brenda Walker article, the emigres tend to still vote like they did in "the old country" which only Californicates their new homes.

For decades, many Californians have just moved farther out of town to find cheaper places to live. But as climate change increases the intensity and frequency of wildfires—leading to devastation and billions of dollars in costs—officials may decide to put some areas off-limits for new construction.

OK, OK. What can't Global Climate DisruptionTM do?! [/Homer Simpson] Yeah, lets put the blame on that, not the treatment of forests like parks where nothing's been left to burn in the wild, the many fires accidentally started by illegal Mexican pot growers (OK, we're at least done with that one), and having a population TWICE as large as in 1970, with that much more water needed. Continuing with the stupidity ...

That could exacerbate the housing shortage, said Stephen Levy, director of the Center for Continuing Study of the California Economy in Palo Alto. “At some point, the regions that are under pressure to build more housing are going to find areas that are prone to more frequent fires,” he said.

What if there were still 20,000,000 people in California? Remember, they've always been big, big treehuggers. Could they have left almost all the remaining land alone, and kept their ranch houses until they needed to be re-built? Oh, but the poor developers, real estate agents, mortgage brokers, and bankers! How would they have been able to make bank? The poor F.I.R.E. industry - those people may have had to get REAL JOBS making stuff!

Let me turn over a new leaf try again with this article. I'll just press harder: CTRL-F "Imm"!. Nope, NADA! Enough of these dim-wits, back to Brenda Walker:

A Fox show noticed the same article and discussed the big picture. Economist Steve Moore asked, “How do you screw up California? Beautiful weather, beautiful mountains, the technology capital of the world, and yet I just have to say, the high taxes, the high regulation, the high housing costs are just driving middle class people out. And by the way, it’s the middle class that’s leaving, so California’s becoming a state of super rich people who live in Silicon Valley and very poor people and homeless people who live in the cities. It’s a sad situation.”

California residents leave for many reasons, like the aforementioned high taxes, crushing traffic, skyrocketing cost of housing — and also to escape demographic changes that tear at the cultural fabric.

California could have remained the closest thing to Paradise the world has seen. Doubling the population via immigration, including mostly those who aren't the same Californians that can take care of it, has caused a great demise from Paradise to a shithole in 5 decades.

I've included one of these songs already (in the "Paradise" post), but the rest are new for Peak Stupidity. These are from the old time California. If not in the 1950's which my friend said would have been the best time/place ever to have lived in this world, even the 1970's Jim Rockford California would have done.

This Joni Mitchell song, just California, is from her 1971 album Blue. Remember, Joni never did worry about the lyrics fitting into the meter of the song. Don't mind that, from a crazy Canuck transplant to the 1960's Golden State:


Going to California was said to have been written by Jimmy Page and Robert Plant of Led Zeppelin about the girl above, "out there, with flowers in her hair". It's from 1/2 year later than the Joni Mitchell song, in 1971 off Led Zeppelin IV (most famous for Stairway to Heaven).

San Francisco (Be Sure to Wear Some Flowers in Your Hair) was written by John Phillips of The Mamas and the Papas - 52 years back! - sung by a guy named Scott McKenzie. (Yes, The Mamas and Papas sang California Dreaming, but I've heard it too many times. I'll leave it out of this one.)

Estimated Prophet is by The Dead, of course, and has been featured before.

This last song, by The Eagles off their album Hotel California, was sung right at the beginning of the demise of California, and I suppose that's what it was about. Don Henley was another flaming lefty, so his lyrics make not so much sense. The basic theme, that Americans had conquered the continent, and there is no more new frontier, is a good one.

All the new trends and ideas used to seem to come out of California. Is California's demise a trend that's coming to all America? I'd guess so, but then there's no more new frontier. We have got to make it here.

Moderator
PS: Yeah, Dtbb, like acid rock, then finding one's self, then treehugging, then Socialism, Stupidity is spreading eastward from the former Golden State at (as the cops say) "a high rate of speed". Peak Stupidity - we called it here first!
Dtbb
PS: You nailed it. I have been saying for years that Ca. may as well be another planet. Peak Stupidity?