Commies through the Ages

I'd promised in yesterday's post, called Bizarro Communism, to explain why I call lots of people Commies. It does sound like an old-fangled Cold-War era term for people, and a flavor of stupidity, that can only be found in world history. 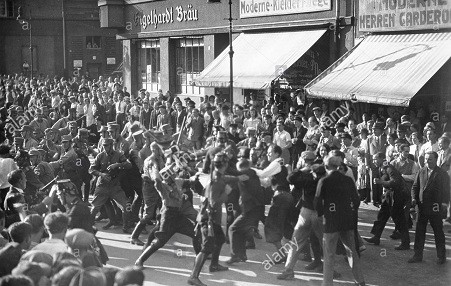 I don't think there's any question that people of a left-wing bent, let's call it, have infiltrated all the institutions of the United States over the last 50 years. That means the Universities, the Media, Government at many levels, and even lower education. Peak Stupidity sees this as the successful campaign on the internal front in the Cold War, of which we won the campaign on the external front exactly 3 decades ago. We don't claim the people involved to be part of armies or any organizations that are related to those on the other side of the external Cold War. It's just that the results are the same as if America had been overrun during an operation Red Dawn, with the Reds having taken control of the whole show here, just the same.

... they don't know a struggle of the classes from a bunch of holes in the ground, they don't quote Karl Marx, and they don't go carrying pictures of Chairman Mao.

This isn't about that Socialist utopia, at least in most of the modern Communists' minds. They just want to destroy traditional society. That's what the Commies of old wanted. If you don't want traditional society to grow right back up like a weed, well, you need total government control. The most important thing was and is to squash religion and the nuclear family, as they are always a big impediment to getting the population under total government control.

The Soviets experimented with all of this in Russia, for 70 years. China underwent their hard-core period for 40 years. We here in America still had real Conservatives in government (in BOTH parties, if you go back a century), even some in the Media (watch Fidel Castro on Meet the Press!), and our population had been steeped in conservative values and reverence for freedom since more than a century BEFORE the founding of the United States. We resisted pretty well, right though the winning of the Cold War. We'd neglected the internal war against traditional America though, figuring this was just politics as usual. Is it?

Some call these people "cultural marxists". For some Peak Stupidity background, please read "Who are these Antifa guys?".

They've been destroying on a social and political level for years, and now they are ready for some literal destruction. The Establishment has their backs. That's an advantage they didn't have, back in Soviet and Chinese days. On the other hand, back in century-ago Russia and 70-something year-ago China, the people really had something to complain about. Nowadays, even the poor live more prosperously than the Czars and the elites of the last Chinese dynasty. Yet, young people see ills in society that are were wrought by their cohorts over the last 1/2 century, blame these problems on "capitalism", and now tell us it's time for a change. Commies are crawling out of the woodwork again.

Just under a century ago, when the Communists were hell bent for Germany, the reaction from the right, which was what it took to defeat them, got, well we all know history, call it "out of hand". The alt-right and any other conservatives with the courage to try to stop these people have not gotten to that point. As we wrote in that post on the Antifa linked-to above, though:

Peak Stupidity hopes that the alt-right, real conservatives, and constitutionalists can keep these antifa's from doing any more real damage to American society before things get out of control. The alt-right and other must be allowed to speak out, so this intimidation of them better be stopped soon. Most people know not to corner an animal even as small as a squirrel. If the ctrl-left keeps holding a lid on free speech, free assembly, and other rights, they will box the other side into a corner. At that point some of the alt-right may just go and turn into real Nazi's, as there'd be no other recourse. That won't be good for anybody.

Yes, we are dealing with the same kind of people that the Russians failed to deal successfully with, the Chinese succumbed to, the Cubans, the Cambodians, and so on. We are much more heavily armed*. We need to understand this 2nd front of the war and who the enemy is. They will not be parachuting into Colorado. They don't need to. Those in the picture above are the enemy. No, don't ask them about the struggles of the proletariat and, no, they don't go carrying pictures of Chairman Mao. 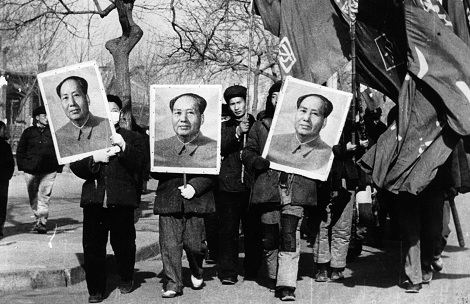 Peak Stupidity already featured John Lennon's Revolution with its advice: "... and if you go carrying pictures of Chairman Mao, you ain't gonna make it with anyone anyhow."** so we won't embed it again. Therefore, with the line "it's time for a change" in my head, let's hear The Rolling Stones*** with their Sympathy for the Devil from their album Beggar's Banquet of 51 years ago!

"I stuck around St. Petersburg
when I saw it was a time for a change.,
killed the Tsar and his ministers.
Anastasia screamed in vain."

"Pleased to meet you.
Hope you guessed my name.
But what's puzzling you
Is the nature of my game."

I don't care about your names, but I get the nature of your game. Unlike Mic Jagger, I've got no sympathy.

* This reminded me of another bout of anarcho-tyranny by the Commies of the Antifa, early this year in Stone Mountain, Georgia. Some of those looked well armed, though maybe not "regulated".

** No Mao pictures, just bike locks, spray cans, feces, and the whole legal system behind them.

*** Featured previously only once so far.

Moderator
PS: Rex, maybe it's because I've heard the Stones' written Stones' version since getting the Hot Rocks album in the 1980s, but I am very partial to theirs vs. the BS&T one. To me, the horns don't fit in at all. Mind you, I'm not against brass instruments in rock&roll - I'm a big Chicago Transit Authority fan (SEE!) I think "Feeling Stronger Every Day" may have been the only Chicago I've embedded - on Trump's inauguration, of course.

Now, as far as James Taylor's "Fire and Rain", I'll say this: BS&T's version was not bad at all. However, JT wrote this one from personal experience of (as I mentioned in this post - https://www.peakstupidity.com/index.php?post=976 ), checking himself into a mental hospital in the Boston area. I like his version just fine but am admittedly a big James Taylor fan.

It's not as if I NEVER like remakes, as Elton John's "Lucy in the Sky" AND "Pinball Wizard" beat hell out of the originals IMO.

Thanks for your musical suggestions, Rex. They will be passed on to management ;-}
Rex Little
PS You've never heard it before? You're in for a treat!

Another song where the BS&T cover is far better than the original is "Fire and Rain." It's a mournful song, and James Taylor doesn't have it in him to sound mournful.
Moderator
PS: I'll give it a listen later on, Rex.
Rex Little
PS If you're going to put "Sympathy" up, it's GOTTA be the Blood, Sweat and Tears version. That one is to the Stones rendition as Mephistopheles is to a cartoon imp.