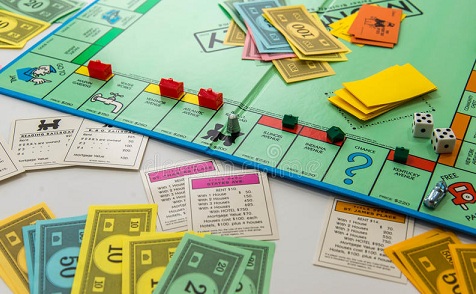 Here's a great comment by a guy on unz.com named "A Ham Sandwich" (probably not his real name) on the way economics should be taught at the elementary school level. OK, these days, this could probably pass muster as an undergraduate economics "seminar" class, but that'd beat the hell out what's taught in the non-science of economics today.

If we wanted to save our country we would make all school children play Monopoly where the Banker (played by the teacher) has an unlimited money supply (i.e., they can “print” as much money as they’d like, at any time). The teacher would not play, they would just pick the winner in each game.

Losing at Monopoly is one of the most aggravating things ever, and seeing distributional effects of directed inflation (with the resulting general price inflation) while losing at Monopoly to some chump in your class who just happens to be the Banker’s (teacher’s) pet would drive the lesson home, good and hard.

But who wants to save the country when we could all just suck up to the bankers on social media instead?


Damn good idea, that one. "Bored" games are not my thing to begin with, but I've played my share of Monopoly long ago.

A hatred of unfairness comes innate in most kids, from my experience. As related in the Peak Stupidity post "Socialism - stuff you should have learned by Kindergarten" two years ago, being forced to share his stuff with kids that don't take care of their own stuff is exasperating for any normal kid. Without knowing the fancy words uttered by the table-bangers in the coffee shops, kids still get the general idea that Socialism is unfair, and therefore SUCKS ASS.

Getting screwed in Monopoly, already one of the more frustrating of the bored games (2nd to Chutes and Ladders?), due to the unfairness of the banks getting unlimited supplies of that colorful money ought to really pound in a lesson. The lesson ought to be "Americans of 1913: you really screwed us with that FED creation, you know that don't ya'?!" and more importantly "END THE FED!"

This is also hindsight, but imagine if candidate Ron Paul, in his primary campaign of 2012 had made a 30 second commercial featuring a FED-rigged Monopoly game. Would the public have gotten the idea?

Moderator
PS: Do you mean finishing as in pushing the board off the table, or throwing those pewter pieces and the other guy's plastic hotels into the back yard? Or, like, legitimately finishing the last transaction? I always liked that colorful money, though. The new Canadian looneys are a poor substitute.

I don't remember that rule, Dtbb but I always liked games with simpler rules that require speed. I could play Tetris all day long.
Dtbb
PS:Did anyone ever read the rules or finish a game of Monopoly as a kid? By the rules players can form coalitions to get rid of the competition until 2 are left if I recall correctly. Been a while.