This past summer one of the letter-writers to VDare related an interesting and yet-unknown-to-me (maybe un-remembered) story of an incident of terrorism in 1978 Rhodesia. (Actually it was 2 cases, but Mr. Reginald De Chantillon's letter focused on 1 of them.)

In "Robert Mugabe, Destroyer of Rhodesia - Rot In Place", Peak Stupidity posted verbatim a eulogy, if you will, of the Zimbabwean savage dictator by a blogger named "Lawdog". We lamented the change from this civilized white-run land called Rhodesia, with capital city Salisbury shown here ... : 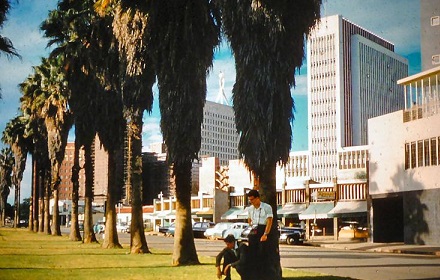 ... to the reverted-to-savagry black-ruined land that is now called Zimbabwe, famous only for setting for at least coming in 3rd in a race for the highest rate of Inflation ever seen.

In VDare-titled "A Reader Remembers A Forgotten Airplane Atrocity In Rhodesia", on this > 4 decade-ago act of brutality by the blacks in (still) Rhodesia, the letter-writer says:

Where was the world when Rhodesians were shot down and massacred by black guys with missiles?

After the Malaysian Airline was shot down over Ukraine, Britain’s leftwing Guardian put out a list of airliners shot down by dastardly villains of the world. In keeping with its anti-European, pro-Colored Revolutionary past, the Guardian did not include the shooting down of deliberately targeted Western airlines such as in the 1978 and 1979 Viscount shootdowns in Rhodesia.

Nor did it include a number of other incidents involving non-Western and Communist attacks in recent history. Instead it focused on various European military accidental shootings. Hoping to mold the world's media, The Guardian is apparently hell bent on restarting the Cold War with a European nationalist Russia by focusing on the imminent threat and horror of white guys with missiles.[ A history of passenger aircraft that have been shot down Robert Booth The Guardian, July 17 2014

The aircraft was a 4-engine turboprop British-made Viscount 782 (pronounced with a silent "s") on climb-out off Kariba airport on the 2nd leg of a Victoria Falls to Salisbury tourist-carrying flight. 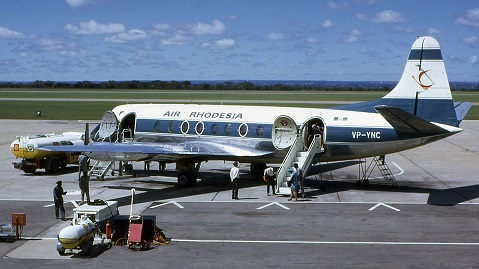 Long-distance airline flying pretty much transitioned over just few years (late 1950's to early 1960's) from the piston-powered liners (the Lockheed Constellations, Boeing Stratocruisers, and DC-7s) some with as many as 112 cylinders among the 4 engines (224 spark plugs)!, to the turbojets (B-707s and Douglas DC-8s). The turboprop engine, developed as another method of using turbine power, was kind of a more-fuel-efficient red-headed stepchild, used for slower flying, and therefor shorter routes. They had their day, don't get me wrong, with these Viscounts, then Beeches, Fokkers, Jetstreams, Dash-7/8s, ATRs, Brasilias, Saabs, and so on but were supplanted starting in the late-1990s by the regional jets. People got scared of the prop planes, what with proper gapping of all those 224 spark plugs and shit ;-}

With that completely unnecessary digression over with, let me say that I couldn't find any youtube videos of actual news footage of the crash, as I did find for the more-well-known (fair enough, as it was 20 x the carnage and Americans involved, albeit Communists) Jonestown Massacre/Suicide, which occurred just a couple months later of that same year, 1978. (Peak Stupidity had a long retrospective - Part 1, Part 2, Part 3, and Part 4.) There are 3 documentaries, one of which seems to be taken from the Wiki article (or vice versa, maybe the same guy that edited wiki?) if the reader is more interested on the details.

Here are a few details: After the starboard wing of the Air Rhodesia flight 825 Viscount was blown apart with a heat-seeking missile on that September 3rd of '78, both engines burned along with fuel and hydraulic fluid The pilots put it into a cotton field, but the plane cartwheeled upon getting to a ditch. 38 people died right away, many probably burned. There had been 56 souls on board. The big detail is something like 10 of those 18 survivors were executed by the blacks who shot down the plane with rifle fire, and then bayonetting of the those not yet dead, including a mother and 3-week old baby. You don't hear much about this, do you?

How about a few more political details? There was a guerrilla "bush-war" going on, related to Rhodesia's desiring independence from Great Britain. Additionally, southern Africa was in no way clear of all the "fronts" of the Free/Communist Cold War (Angola on the west side of southern Africa was a big one). Therefore, the Commies supported whomever wanted destruction of the productive mostly-white Free World. The Chinese were behind the Shona tribe comprising one of the black groups, the ZANUs, but there were others supported by the Soviet Union/East Bloc military arms, the ZANLAs, ZAPUs, and ZIPRAs - no I can't keep them all straight, except that they were all enemies of the White Rhodesians. Oh, yeah, those missiles - they were supplied by the Soviets.

Let's relate this to the modern world just a bit. Now that the white man has been out of most of the dark continent for 50-60 years, and losing the last bit of their lives/culture's work in South Africa now, the Chinese are over there for the resources. They were just there with the rest of the Commies bent on destruction in the Cold War times, but now they are trying to make something of the place. Peak Stupidity truly wishes them well. China does not have all the natural resources that America does, and I say let them have at it. Couldn't America possibly find its way to self-sufficiency again?

Let's sit back with some popcorn and watch the Chinese try to run the place. I somehow don't think the Chinese will have the patience and good will to try (for the most part) to wish-for, at least, and help elevate the Africans to better living standards and education levels. For the decent, smarter Africans, white rule was a chance to learn and a chance to move up into a civilized world. That's over now.

Do the Chinese have the kind of altruism that missionaries do? I think they want to get stuff out of the ground, period. There's gonna be ... a little resentment, if I may. Will the black rulers and those near-billion people still hate the white man? I think we'll start to hear some different chants and sayings. I'd only be fair play if Europeans and Americans backed some black tribes like those in 1978 that like to shoot down airliners. However, the Cold War is over, the Chinese over there are not the Commies, and we are flat freakin' broke and have no business in Africa. Let's leave it alone for a century or two. It can't get any worse.

Dtbb
PS:Nothing new. Just old stories I've read.
Moderator
PS: I've heard that one before, Dtbb. Is he still writing more posts, or too busy with his new job. (I need to get on his blog sometimes - fixated on unz.com too much!)
Dtbb
PS: As Lawdog says "Africa always wins". He grew up there.