(OK, I made up the term "mountaineeress" as a dig at the feminists, and that "twin peaks" part of the title was not really necessary. I guess it could be the twin peaks of peak feminism and peak female stupidity?) 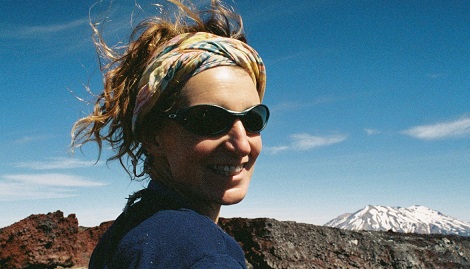 This is another catch-up post, one from a post I'd read months ago in the Get Pocket (??) website. It features an article from Outside magazine, one that I used to get in the mail, in fact, back in the day. It became a lefty political mouthpiece in short order, hence no more bucks from this guy.

The article in question, by one Cassidy Randall, "A Mountaineer’s Choice to Never Have Kids" is pretty-well written and somewhat balanced, but in no way conservative. This kind of thing brings to mind Peak Stupidity's posts on "demographic suicide". I had forgotten there were so many, first with Part 1, Part 2, and Part 3 of the original "Western World committing demographic sooeee-cide" series, and then "Western World committing demographic sooeee-cide - " feminism connection, the anti-snowflakes, and the working woman. Good stuff, if I do say so myself. The subject of all those posts was the dysgenic changes in the demographics of America and the Western world, as the smart and capable women don't have many children and then the poorer immigrants and welfare cases have an overwhelming number more. Socialism is the enabler of this and has been since the scumbag cocksucker LBJ ramped it up in the mid-1960's. We are bearing the fruit of it all presently.

Anyway, it's that 2nd-to-last link above, on the anti-snowflakes that brings to mind the story here. Peak Mountaineeress, Lydia Bradley, subject of the article, seems to love her life of adventure and the serious challenges of the peaks. I wouldn't want to be in a society where she could be told outright by the authorities "you stay in this house and have 3 children, prontomundo" (though, if they were taking volunteers, well, ... you know ...) There are really not all that many women with the personality of a Lydia Bradley, which to me, no genderbender nonsense here, just has more manly traits, even if in a very decent womanly body.

She wanted to climb and guide climbs in the tall mountains under extreme conditions - more power to her. A big point of the article, though, is that Miss Bradley had a sterilization (tubal ligation*) done in her mid-20s**. This was not done on a whim, even though doctors tried to tell her that she should wait until she's older to decide. Here comes a contradiction of sorts, though.

Bradey grew up as the only child of a single mother. From a young age, she learned that being a good parent required an incredible amount of time and attention. With her climbing career gaining momentum each year, she didn’t have those hours to give to a child. “I didn’t want to risk doing something so very important badly,” says Bradey, now in her mid-50's “And for me, there were other things in the world than having children.”

All Lydia Bradley knows about raising kids is from herself as the one child of a single mother. Is that the only option? I'm not trying to argue that with a husband, she'd have the ability to go climb the same peaks all over the world. It's just that maybe she did not see the life of a happy family very well as an opposing example to the life a single woman mountain climber. Which of her two options was really "very important"? Secondly, well, she can't be a lesbian, or she would have had no need for this procedure. She likes men, and knows where babies come from, so doesn't she understand the having a husband part? Perhaps, by "not having children" she assumes "not have a family of any sort" too.

Fair enough, in the latter case. I don't really see Lydia Bradley's rational decision as being any kind of female stupidity (it just seemed an appropriate topic key for the general subject here). How many Bradley wanna-bees are there, though? This life of travel, adventure, casual sex (hence the tubal ligation) may sound wonderful, but most women will not make this solid, permanent decision with not too many regrets, per the article, as Lydia did. They will be the ones complaining that they are having a hard time making, carrying, or delivering a child at 40 years old, as related here in "Not Bringing Home a Baby" - the Sadness of Stupidity (Part 2). I'd imagine it be that much worse if they don't even have that minute chance, had they made that tough, but likely erroneous call, at 26 years old, to be sterilized. I could see a class-action suit ... against ... well, SOMEBODY, DAMMIT!

In the meantime, 18-25 y/o single-women with no non-Government, no non_NGO support, i.e., supported by taxes on men and those single-woman in question here, have 2 to 5 kids. Those kids aren't likely to end up being fit, brave and smart mountain climbers like Lydia Bradley. Who will be left to climb the high Himalayas, Aconcagua, and the unknown peaks of Antarctica? Instead, as non-fit, non-intelligent adults with jobs taken by machines and foreigners, they will live off the ruins of this nation. Why? Because it's there.... so far.


* which, from context, sounds PERMANENT.

** The article seems to purposely not pin down the exact age, or else the author is not good at the timeline stuff.