Days of the scold, young and old

Stuff a sock in it, bitch! 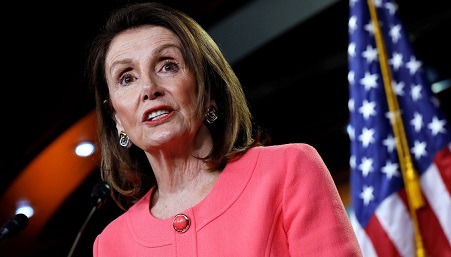 Just glancing up at a TV last week resulted in a view of this 79 y/o Minority Leader of Congress, lecturing us or the rest of the US Congress on some such crap having to do with impeaching the President, I'm guess. Thankfully the sound was off. How long has this old biddie been going on browbeating American people of any sort about anything? She been browbeating on the taxpayers's dime for 34 years, 6 of which were as House Speaker. Her husband is a F.I.R.E. industry tycoon (the first one, Finance). and wiki says just Nancy Pelosi's net worth is $74,000,000. She's not really one of us.

I'd give Pelosi some credit for a NO vote on the Iraq War in 2002, but she'd long ago made up for that being a typical warmonger, which is pretty much most of Congress. It's also her excuse for continuing the impeachment distraction of Trump, as somehow Russia is the enemy. (I remember the Cold War ending just over 30 years ago. Maybe she's been senile for that long.).

Why do Americans put up with some old lady in a red dress pointing fingers and wasting the time of the highly-paid Congresscritters? The Founders of our country wouldn't be capable of believing this shit. They and their regular-American colonial-era Americans lived as the freest non-savages* the world had seen, and maybe will ever see. The vote was limited to men who made something of their lives. Would Nancy Pelosi not have been shot in a duel or just to plain shut her up, long before she made it to her first Congressional session?

On the other end of the age and, err .. spectrum, we have that 16 y/o scold Straight outta Sweden, who deems herself wise enough to lecture the whole world, from New York City. (US out of the UN, and UN out of the US!) Peak Stupidity has ripped that young alt-Pippi Longstocking a virtual new one - check here, here, here, and here.

You really know you're residing in a silly country, when people take these scolds, young and old, more seriously than a 3-time rerun of Gilligan's Island. I've personally had enough of all of them. I don't have to listen to some old biddie or brainwashed/deranged little girl telling me what's what. These two can go fuck themselves, and I'm sorry to start off this week with that language, too. The only women of ANY age I'm ready to listen to about politics are Peak Stupidity's 2 favorite pundits, Ann Coulter and Michelle Malkin. I'm sure there are quite a few more I'd like to read or hear from, but the only one worth of office I know of is Miss Coulter, who would be the first to call for a Constitutional Convention or push for a new Amendment to repeal Amendment XIX, the one that mandates the women's vote. Yes, isn't that ironic?

* Peak Stupidity compared the freedom of the savage Comanche Indians vs. the lives of the white men of mid-19th century America in our final (3rd) post of our book review of the great Empire of the Summer Moon. (Part 1, Part 2, and Part 3.)

Ganderson
PS Thanks for the tip on the Comanche book The great John Keegan made the same point in Fields of Battle. He said that free peoples like the Comanche would fight with great ferocity to protect their freedom. Larry McMurtry makes the same point many times in his various works.
Moderator
PS: I have indeed noticed at least that part, Bill. I try to ignore all the details (easy if you don't watch any TV and don't frequent places that have the sound on). However, the turn from Russian collusion to some Ukrainian thinga-mabob is something I've vaguely heard about, basically, from unz.com headlines, haha.

Yes, you are right, but no matter how far they get with this crap, they've already won. They've distracted this President with the attention span of a 10 year-old. We are 3 years in with not much done in the way of stopping the ruination of America.
Bill H
PS Have you noticed that, while united on the desire to impeach, Democrats are divided on what crime to use to do so, and have changed the crime several times? Shouldn't that ring an alarm bell that they don't really care about "high crimes and misdemeanors" and are putting the cart before the horse?

First it was about "colluding" with the Russians to meddle in the election then, when that flopped like a dead fish, it was about "obstruction of justice" until it turned out that what he wasn't obstructing wasn't justice. Then they moved on to "quid pro quo" until it turned out the voters couldn't speak Latin, so they switched it to "bribery," not because he did it but because that crime is stated in the constitution.