If you didn't have enough reasons to hate this man,

Globalist Scumbag of the Day: 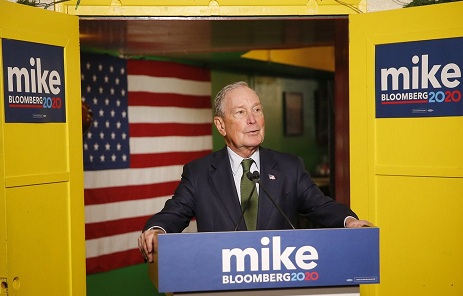 Peak Stupidity has another big one for you. Per the Associated Press, "Bloomberg: US would benefit from more, not fewer, immigrants". It was the anti-gun words and money out of Michael Bloomberg, as recounted over and over by the NRA, that had me hating the guy long ago. His control-freakiness on other matters only applied to NY City, so to me, the large-soda bans and that kind of stupidity were just things to laugh about.

“We need immigrants to take all the different kinds of jobs that the country needs — improve our culture, our cuisine, our religion, our dialogue and certainly improve our economy,” the billionaire told reporters at a Mexican restaurant in Phoenix.

Yes, even if you are the 9th richest American, I guess the stupidity can reach right on up there, like water in a 1,000-year flood. Let's see:

We have not much of an American culture anymore, other than the Big-Biz/Government induced Globohomo agenda, and any old-fashioned American culture has been squashed by multi-culturalism. We have enough Mexican restaurants to choke serve a horse, or are the Foodies not satisfied yet that we have at least one Eritrean, Burmese, Burkina Fasoian, Madagascarian, French Guianian, and Ross Ice Shelfian restaurant in every town along US route 2, in case they may stop there for gas?

Our organized Christian religion has gone downhill due to the cuckful Globalist, ctrl-left agenda of the Churches (most especially the biggie, with that Commie so-called pope) and all the "improvements" to our religion lately, the only serious religion being implemented is Islam. Exactly how's that an improvement for Michael Bloomberg's people is above my pay grade. We haven't seen those improvements to our dialogue simply because 14% of us are foreigners, 10% of us speak Ebonics, and, if tweeting is an improvement to the dialogue, then I don't want to see any more improvements.

Lastly, this moron brings up economics again. Yes, for the Globalist elites, replacing the population with low-cost foreign labor pays off. It's no improvement for the regular American, and quite the contrary.

The fact that this fucker was a Republican mayor of NewYork City (2002 - 2007) tells you two things:

1) The red squad and the blue squad just two flavors of the same stupidity, out of The Party.

2) New York City is so far gone that a 2nd-Amendment-trashing, control freak like this guy was considered the "conservative" one.

We really need to start requiring visas for any visitors from New York City. It's not nice to hate people, but Peak Stupidity makes a big exception for Globalist anti-American scum like Michael Bloomberg. Have at it.

Moderator
PS: I deleted one of them, Ganderson. You know, I know OF that movie, but I'm not sure I've ever seen it. I'll have to put that on hold at the 'brary.
Ganderson
PS. Sorry for the doubles!
Ganderson
PS How far away are we from an “Escape from New York” world? Snake Plissken call your office.
Moderator
PS: The only State in the union in which you have to drive north to get to the South (almost up to the I-10 by this point).
Dtbb
PS:Hell, half of New York and half of Puerto Rico are in Florida now. I know, same difference right.