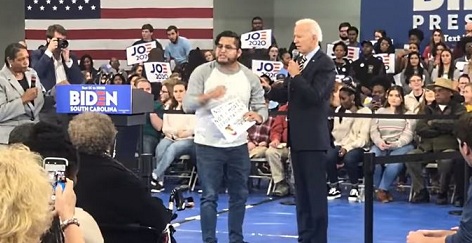 (Got 2 posts in a row here taken from VDare, THE go-to website for all things related to the existential immigration invasion. This is the 1st.)

Besides not keeping up with current events, as we used to call it in elementary school, Peak Stupidity most ESPECIALLY does not give a rat's ass about the infotainment involving the race for leader of the blue squad of The Party. Apparently the leader still is one of the 3 "Old Pharts", one Joe Biden, ex-plagiarizer and former Vice President under the tutelage of AntiChrist - runner-up Øb☭ma.

The way the shitshow has been going, from my 3rd-hand information, Camel-toe Harris is out, and all the "Young Turds" are so far out there that Joe Biden should be able to win on a "Senile but Still Sane" platform. I note the remainders of some sanity in Mr. Biden from a read of the always-reliable Allan Wall's latest "Said in Spanish" article "Professional Hispanic Activists Condemn Joe Biden—But Grassroots Hispanics Haven’t Got The Message". This one beaner activist in the video below is very concerned that candidate Biden cannot promise NOT TO DEPORT MURDERERS. Yeah, I know, that's not much to ask these days, but Senile but Sane Joe is seen holding his ground (or at least walking away from the stupid beaner bastard) at this Q&A thing in South Carolina.

Why does Peak Stupidity use pejoratives like "beaner" and such? It's usually when we really don't like certain people. The guy in the video is an example. He doesn't represent the average Hispanic. I personally seem to get along with most I meet, that speak a lick of English (though it still doesn't mean it's a good thing to have large numbers of aliens - legal or illegal - living here). Mr. Wall posts some good reading material, as the man lived a decade or so in Mexico, has a Mexican wife, and is fluent in Spanish. He has his finger on the pulse of Latin American politics, at least as related to America and emigration to here. Per Mr. Wall:

Those professional activists don’t want anyone deported, including murderers.(That's what "not one more deportation" means when it includes felons. ) But rank-and-file Hispanics aren’t that radical, which explains their support for Biden. They’re less worried about deporting murderers than they are about other policies. Indeed, as Heather Mac Donald has repeatedly observed about the Establishment GOP’s plan to move left on immigration, Hispanics don’t care as much about immigration as politicians like to think [Why Hispanics Don’t Vote For Republicans, National Review, November 7, 2012]. That also explains Hispanic support for Trump. [ 20% on his graph in the article ]

The guy on the video wants to stir up the insane activist set that is running things for most of the blue-squad candidates, with perhaps an exception with the 3 old pharts. (They have this old habit of hiring campaign people who are competent, usually meaning white guys. #OldFashioned!)

Now, as an addition to what Mr. Wall wrote, I propose a different explanation from Mr. Biden's dissing of this activist beaner, rather than sanity. Perhaps Mr. Biden was worried that the guy was a ringer. I should use a more modern term that the Millennials might, but damn if I could spell it even if could remember it. "Spoofer" or "troll" is probably what I'm looking for. Anyway, if you go back to the hilarious video from an Occacional-Kotex rally we posted in "Occasional Cortex and the importance of the Kook-vote", you may see what I mean. Was Joe Biden told by his handlers to be aware of trolls? Did he tell the gentleman of the Bean to "vote for Trump", as maybe a way to show that he was onto the possible trolling effort?

A guy says we shouldn't deport illegal alien felons back to Mexico. The insanity is close to the "eat the children" theme of the troll or insane lady (we report, you decide) in the AOC video linked-to above. You can humor the guy, as AOC did to the assumed-nutcase, but that looks weak. By walking away, Mr. Biden extracted himself from a decision on "troll or no troll?"

Who knew running for office was going to become this tough? 50 years ago, you just had to understand the range of ICBMs, the missile gap, the history of the always ongoing revolution in Cuber (J-Fing-K's phraseology), and what the "gold standard" means. That was hard enough, but now, this ??? What's a senile Old Phart to do?

They can travel back on Swift Airlines, call sign "Repatriate". See - https://www.peakstupidity.com/index.php?post=981
Dtbb
PS:I only care that tried and convicted beaners pay their debt to our society, then deport them if they weren't executed beforehand.