Are we past Peak Stupidity ...

... in exercise machines, at least? (no, unfortunately, absolutely not regarding the important stuff) 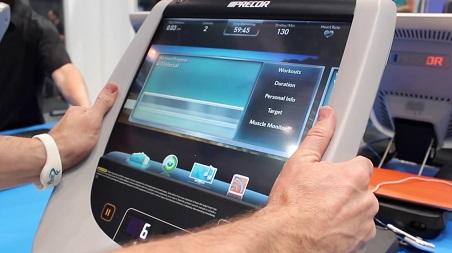 The accuracy of calculations and displays thereof of power, work, distance, etc. of exercise machines is a niche topic* here on Peak Stupidity, so I won't feel bad if you skip this post. Previously we discussed this pet peeve here, here, and here. Upon using a new set of Precor brand machines, including the TRM 885** treadmill, I found that maybe the stupidity level has been decreased finally. As I've written, it shouldn't be a big deal to hire an engineer for a couple of hours to consult on what calculations should be performed on the raw data of speed and slope (along with any user input).

I believe it's the display unit that has the chips in it to take the raw data (assumed position of the incline motor, perhaps with position feedback, belt speed, and user input on weight, if the latter is part of the program) and calculate and display Calories burned, rate of calorie burn, watts of power, METS, distance covered, distance climbed, and all that. Since this was a new machine, I experimented with it for 15 minutes, while standing on the sides, so I could think. I was pleased to see that some of the stupidity of the other treadmills, calculation-wise, was eliminated.

I wrote more about the exercise bikes in "Peak Torque, Wattage, and Exercise Machine electronic stupidity", and briefly mentioned errors with the treadmills. The big one in lots of those machines is that calories burned, and rate thereof, do not change with the incline of the belt. That is completely bogus. In fact, if you just look at basic mechanical work, in the simple newtonian physics sense, there is no work being done by a guy running at 0 slope. Of course, that's not the real case - real life is hard to model, dammit. No, you have to get to the biology, or exercise science, really, to get reasonable numbers for work being done while running level. Still, slope is a big factor and much easier to calculate (power being dissipated is just runner weight x vertical speed, and vertical speed is the belt speed x slope***) Calories burned, rate of Calorie burned, wattage, METs, or any other way you want to put it, all ought to go up linearly with the incline.

Yes, this was fixed by the Precor people. It's a major breakthrough in the effort to give good numbers to represent the exercise being done. Nice job. Do they read Peak Stupidity over there (where?) - I think not.

The increase in watts dissipated per % slope increase is from just over 5 W/% at 2 mph, and (what should be double ) 9 W/% at 4 mph. This machine, BTW, is one in which the user doesn't input his weight, or much of anything else. If you've read about our experience with the Higi Station (revisited here), you'd rightly get the idea that this is nothing but a GOOD THING. Therefore, with a W being a J/s or N-m/s, and a 4 mph equaling a vertical speed of 0.019 m/s, you get an assumed runner weight of 106 to 118 lb, kind of a smaller runner, but at least in the ballpark. I'd really want to see one of these machines that DID let one enter his weight, and see if the calculations worked out.

Back to the level running for a paragraph, or even changes in speed at a constant slope. For level running, the machine shows 32 W at 1.0 mph, with it going up linearly with speed by 14 W/mph only through 3.0 mph. Then it increases more and more with each 1 mph increment, up to almost 300 W at 10 mph. That's interesting and probably realistic. Maybe they got data from some exercise scientists****.

Now, to address the flaws still seen, a simple one is the Calorie burn per minute rate not going up linearly with the aforementioned wattage as speed increases. It should - they are nothing but different units of power. These rates don't change for the 0.5 speeds between 3 and 4, etc, When going down (bringing the slope down, that is), they will be the same as the higher value, and going up, the same as the lower value. Why? Laziness in programming is my guess as to why. [Left in just to help my correction] It's interesting that the Watts dissipated differences from one integer speed to another got highest at 5 to 6 mph, then went down again. Is there something from exercise science that backs this up? Maybe so. This led me astray, as I didn't graph power vs. mph at 0 slope, but a quick look at that in both W and Cal/imn wrongly had me thinking the relationship between Watts and Cal/min wasn't linear - they are nothing but different units of power exerted. The relationship should be one number, as in the next paragraph.

This particular treadmill went to a negative slope. I'd never seen that before, but maybe I never tried this. Unfortunately, the power dissipation display (whether W or C/min) doesn't get lower as the slope goes below 0. Should it not?

Whew! I didn't mean to bore myself here. Still it's good to see some reduction in stupidity somewhere. Exercise treadmill stupidity may have peaked back at the Precor model 811 and though not as robust looking, I liked that Bowflex too.


* Oh, a "sub-fixaton" is what we called it in the Bowflex machine post.

** At least I think it was - these exercise machine manufacturers are shy about putting model numbers anywhere. I found an electrical warning sticker on the back that mentioned the 811/835/885, but I'm pretty sure this newest one is the 885.

*** OK, at small angles that works, but, since the belt speed is the hypotenuse of the triangle, and we really want the "run" (of the rise/run), you'd get erroneously high reading of vertical speed and vertical distance for larger angles.

**** No, that's not just a BS major for athletes. I've seen some cool work being done.

Moderator
PS: That was probably still not clear, Dtbb, so I added wording to the post and I'll write a bit more here.

I had written down a table with 3 columns, mph, W, Cal/min. Just looking at the W and Cal/min numbers without graphing them vs. mph. I'd thought W was continuously going up in higher increments, but Cal/min not. I pulled out the calculator yesterday and noted that the Watts display was ~ 14 times the Cal/min display, and pretty close at all levels, as, again, they should be (nothing but a units conversion). The problem now is that this factor of 14 or so is off by 5 x from the actual units conversion.

I'll have to back off and get back to this, as either I am missing something, or these people really got that part wrong. Calorie counts during exercise do seem to meet the Does It Make Sense test. Maybe their W of power dissipation is bogus.
Moderator
PS: I had just written down the Cal/min and Watts readouts at 0 slope and 1.0, 2.0, 3.0 ... through 10.0 mph, Dtbb. I should have graphed W vs. mph, to see that it was NOT steadily going up (just had the numbers on a small sheet of paper). It would have gone up the most steeply at 5 mph than less after that.

It would be disheartening to know that you have to work out for 28 hours straight to make up for that pat of real butter. Luckily, we are talking about the same, Large, Calories in nutrition. It doesn't take much to burn off a small calorie - raising 1 gm of water 1C. Kid stuff.

Dtbb
PS:You got me on how you would graph that function. The only reason I remember the calorie thing is because I would make fun of women counting calories. I would dishearten them by saying you needed to multiply everything by a thousand. The varied reactions were priceless.
Moderator
PS: Yes, that is correct, Dtbb. I meant the "large Calories", as the call them, or "nutrition Calories", which are 1,000 x a "calorie" (the amount of energy to raise 1 gm of water 1 C at atmospheric pressure). I change them all to big "C"s.

Then I found that I was wrong about what I thought was a problem with the relationship between Cal/min and watts. This relationship is linear, after all.

Then, I am at a quandary as to why this relationship (I hadn't calculated it before) is 0.0143 Cal/min. for each watt, by simple definition, while the numbers I'd written down were off by a factor of 5! WTH?
Dtbb
PS:Another thing; if I remember my physics correctly, calories in this sense should be written as Calories. 1Cal=1kcal.
Moderator
PS: I assume you're writing in regard to the small angles bit, yes, true. In the case of these machines, all these manufacturers need is a couple hours of a mechanical engineer's time. They can then get their software geeks in India to write the program to put on the chip. It ain't rocket surgery, but they don't even try most times. I guess there aren't any complaints, 'cept for right here on this blog. ;-}
Dtbb
PS:Depending on the level of precision required, when measuring distances with a tape in surveying, you really got to be way out of whack vertically or horizontally to be significantly in error by the math. Of course I do everything precisely as possible on principle.