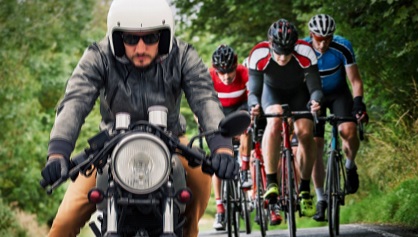 This Babylon Bee is like a full-time parody department of Peak Stupidity. I've read a number of funny posts there linked-to by Steve Sailer (you'll have to hunt around - he writes A LOT!).

On the new Gender-Bender stupidity that is sweeping across the land like pet rocks or the hula hoop, the Bee tells us about a Motorcyclist Who Identifies As Bicyclist Sets Cycling World Record.

It's short - read the whole thing in 1 minute there. Here's the best sample:

Professional motorcycle racer Judd E. Banner, the brave trans-vehicle rider, was allowed to race after he told league organizers he's always felt like a bicyclist in a motorcyclist's body.

Is that too obtuse from some of the "woke" Gender-Bender crowd to relate to? If so, maybe they could Peak at Peak Stupidity instead, as we exclaimed "Just when I thought I was out, they pull me back in!".

Moderator
PS: Oh, hell, Rex, it WAS on this site, and I feel bad that I didn't recall this comment. You wrote it under that "Just when I thought I was out ..." post that I linked to right here. I now remember your discussing the price of the DNA test.
Moderator
PS: It was probably under a Steve Sailer post, Rex, where I read lots about this form of stupidity. "X Beach Volleyball" - it may take people a while, but they'd catch on. I guess the "X Games" will have to be renamed - the "Mountain Dew/Red Bull/Marijuana Games" or something.
Rex Little
PS The whole genderbender issue in sports will go away if organizers quit labeling their events "Men's" and "Women's." Instead, make them "Open" and "X only." Require participants in the latter to submit DNA samples proving that they lack the Y chromosome.

I may have made this same point in reply to another post awhile back. If so, I apologize for repeating myself.