One Second After - Belated Book Review 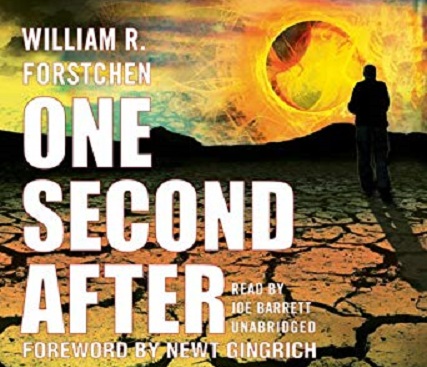 This is a new thing here at Peak Stupidity, the belated book review. I read the prepper novel One Second After, by William Forstchen, at least 5 years back, maybe 7 or 8. It was a fairly decent book (I'm gonna recommend it), so I have the gist of it and a few details still in my head. I don't feel like going to get it again, so, WTF, here goes. (If this works, maybe I'll review from only Sally, Dick, and Jane material.)

Our Preppers and Prepping topic key on Peak Stupidity is not one we have spent much time on. Perhaps this is because we don't think getting prepared for some pretty bad scenarios to come in America is any kind of stupid. We do have some prepper music - it's not a big genre - here from almost 3 years back that you may want to play in another tab, as you read.

One Second After is titled based on the worries about an EMP (Electro- Magnetic Pulse) whether from an attack on the country, by accident, or just due to nature. Hey, it could happen, and this is one of those SHTF scenarios that COULD be prevented with a lot of long-term work. Hardening, or just different designs, of electronic components in vehicles, important computer hardware, etc. is something that can be done, and I think Mr. Forstchen wrote this book as a warning. Yes, one second after one of these happenings, much of our electronics wouldn't work*. Things would get ugly, first quickly, and then more slowly. I don't dispute the premise of this book.

The foreword by, of all people, Newt Gingrich**, noted that he had encouraged the writer, or all writers, to write of what they know. That's part of the problem that I did have with this book. The writer, just as with Mr. Gingrich, is a history professor. He's no technical guy of any sort and is a man of letters rather than a man of action. Mr., OK, Professor Forstchen did not try to describe too many technical details that he wouldn't know about. However, in this novel, the narrator professor (yes, write of what you know) had happened to get placed in the N. Carolina mountains*** when the event hit and all vehicles newer than non-digital-electronic 1970s models quit running. He just happened to be the man of the hour (many months really), as his history professor skills somehow made him the leader that was needed during the grave crisis. I think this is nothing but wishful thinking on the part of William Forstchen and not something that I could really see happening. The history professor would become history during a SHTF.

The author seems to have put a lot of thought, or reading, into all the problems that would occur, from the lack of working machinery to the problems with diabetics getting insulin, which must be kept refrigerated. Most serious preppers have thought of all of this and more, but this book could clue in those non-preppers, who haven't. The story goes into detail about the struggle and paints no rosy picture of how many people would survive and how. It's pretty good reading with some suspense, and yes, a romance between one of the hotter women who has ended up in Black Mountain, NC and, well, you guessed it, the history professor narrator! Maybe William Forstchen is looking forward to an EMP event.

One quirk, and something I sure wouldn't expect from a professor in the Humanities, is the author's use of the bad English phrasing "he should of" and the like instead of "he should have". No, this is not the characters' talking here. This is the way the book was written, and that erroneous English appeared dozens, maybe hundreds of times. He should of wrote it better than that, right? ;-}. How an editor would not catch all the instances of that same mistake is a mystery to me. I only remember this from > 1/2 a decade ago, because it's pretty egregious for a published and somewhat-known novel.

Lastly, the author showed himself as a Statist at the conclusion of the book. Go figure, but from a would-be prepper no less? This is something of a SPOILER, but the first contact from the outside world (outside of the Black Mountain environs) is from the US Navy, trying to help (as I just barely remember this book). Yeah, right! When the SHTF nation-wide, I don't think you wanna' be counting on the US military. With all the hands-on ingenuity performed by the local men to save their civilization, I doubt any real preppers would count on anyone but themselves and their ammo supply.

If you've read books such as Alas, Babylon or Lucifer's Hammer and liked them, you will probably like One Second After also. I recommend it, but with the qualification that you don't imagine you will be the leader who saves the village and gets the hottie, unless you have the skills - not usually obtained from a career as a history professor (engineering - different story).


* Imagine the GPS signals somehow going out - or being TAKEN out. It's not only position, but just the accurate time signals alone, that a whole lot of machines used in our daily lives depend on.

** This cocksucker seemed like part of the solution to America's political problems in 1994, with his "Contract with America", coming as a great relief and bulwark against the Clinton Socialism, including the Hildabeast's attempt at government-run health care. Alas, Newt and company GOPes broke the contract, and thing when downhill continuously, and much faster from that point on.

*** Likely to be one of the better places to escape the madness, as the area is full of white people with the Scots-Irish background, hillbillies, basically, that may be of the stuff to survive a SHTF scenario. This is excepting Asheville, as it's artsy-fartsy-ville at this point.