(This is one of the last few of the open tabs i meant to comment on. Dang, it's from 6 months ago.) 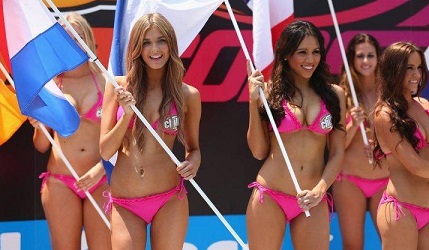 Per a click-bait* article on Zerohedge called "F1 Grid Girl Ban Infuriates Dutch MP: 'Only An Idiot' Sees Beautiful Women As Problematic", just one more bit of fun has been "cancelled" by the influence of feminism.

These girls are hired for their looks, of course, with, per ZH, requirements as to circumference at the chest of 95 to 100 ... no CENTIMETERS. I guess the fact that not every girl is beautiful enough to show (a lot of) herself at these Formula 1 races has certain other women upset - more likely jealous. Is that a reason to ruin guys' fun everywhere? Yes, apparently it is, and that's the way things are going. It just takes a few, weak corporate folks that cave, and it's over, usually for good. 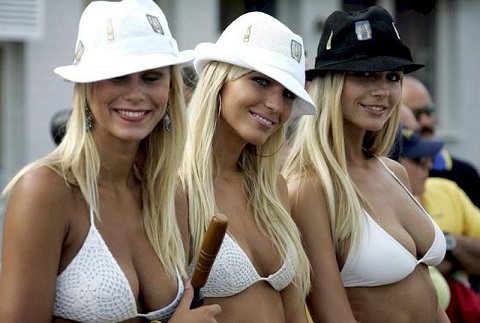 I've been to a Formula I race once, but with seats that we could barely view the racing cars from, much less any of these grid girls. The window is closed now. Well, if Peak Stupidity is going to go the click-bait route this evening**, we may as well put up some good music that also features some hotties, as far as the video goes.

This is the British band Sweet, earlier known as The Sweet with their 1974/5 song Fox on the Run from the album Desolation Boulevard.

* Gotta watch Zerohedge on this though. Many of the articles with thumbnail girls pictures have NO pictures in the article ... very disappointing.

** Actually, it's not really, as you know we don't have headlines, just the articles themselves, but you are welcome to click top or bottom to comment, anytime.

Hail
PS Peak Stupidity and Peak Oil may both have to be pushed back.

Some of the big Peak Oil theorists of yester-decade would even, I am sure, propose a direct relationship between the two...
Dtbb
PS:I figure it is just Peak Stupidity! I think you need to revise your graph.
Moderator
PS: OK, I did know a Moslem guy who flew airplanes, back when you really had to pay your dues, and he was a very decent, fun guy.
Moderator
PS: Hail, under Islam, I guess you could have the Burka Babes, but it's just not quite the same to me. I've never seen any Moslem, even one enrolled in engineering school with a big interest in anything technical like racing cars, or really anything technical at all besides cell phone bombs.
Moderator
PS: Unbelievable about this blaming the young girl, especially on the cop's part. Is it some big effort to protect the reputation of the city under the Commie DeBlasio's mayorship, do you think, Dtbb? Or is it just that no one, not even the cops, wants to admit the general problem?
Hail
PS I see the dissenting Dutch MP is a Roy van Alast (b.1983), of Geert Wilders' anti-Islam party (which holds 13.3% of seats in the Netherlands).

How many Dutch get named "Roy"?
Dtbb
PS:BernCar, the cops are even getting into the blame game, claiming she went there to buy drugs. Disgusting!
Moderator
PS: I meant to say, BernCar, that he had almost that very headline that you jest with.
Moderator
PS: Steve Sailer covered the young lady's murder in (at least) this post - https://www.unz.com/isteve/18-year-old-white-girl-stabbed-minorities-hardest-hit/ - - - , BernCar. Paul Kersey covers the stupidity of the future next victims of this sort of thing pretty well. Yes, it's very aggravating.

BernCar
PS: Yes, Dtbb, and all the other potential victims at Columbia are worried that the adjoining neighbborhood, Harlem, is going to get a bad reputation because the three animals who killed the girl came from there. Unbelievable. It's like they are willing victims.

And, of course, the newspapers are like, "World Ends: Women and Minorities Hardest Hit."
Moderator
PS: You're quite welcome, Dtbb. Oh, "Animal House", I had to read the description, I know I'd seen this scene.
Dtbb
PS:Thanks for the diversion. I needed that. Reminds me of what dreams are made of.
https://youtu.be/C2SkqaCO9c4
I can't get rid of my anger over that poor girl in NYC though.