The ctrl-left has a problem with democracy 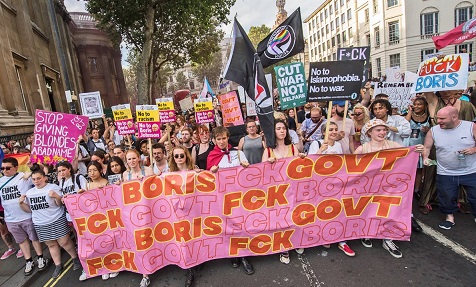 (Image straight off the Zerohedge article)

Aren't these the same people that call the alt-right and conservatives Nazis and the like? They want fairness and openness, and everyone and his felon brother should be able to vote.

The left has been pushing the franchise (voting rights) for all for a century now, starting with non-property owners and culminating with the really big screw job of forcing the States to allow women to vote. The denouement in America was Amendment XXVI to the US Constitution in 1971, letting 18 y/o know-nothings vote, because anyone over 30 should not be trusted. Should we be listening to those lefties that have gotten well past 30 y/o now, pushing 80 or so?

They needed this in the 1960s when the establishment, that is academia, government (for the most part), and even part of the media was still conservative. More votes were required to change the establishment and stick it to the man, at least for those of the left not prone to violence at the time. Well, it's not working out perfectly for the ctrl-left, STILL. WTH, man?! Someone like Trump was not supposed to be able to get elected anymore. The time-wasting and distracting 3-years-running impeachment infotainment is what they have reacted with.

In England, though he's not much to write home back to the Colonies about, Boris Johnson, because he supports the already-voted-for-3-years-ago exit from the EU, is apparently too much for the ctrl-left over there. Zerohedge writes: ""F**k Boris" - Antifa Protesters Clash With Police Outside Downing Street As Furious Leftists Revolt"*. There are big protests, foul-mouthed and violent, from these people who used to be just enamored with the electoral process**.

There's more to this that I'd like to write about in another post. I don't think it's any grand conspiracy, the people involved being too stupid to operate one, but what has happened for years is this: The ctrl-left will call Nazis, tyrants and the like appellations, Presidents and others who are really not that awful far from their own positions to begin with. George W. Bush, not any kind of Conservative, is a perfect example of this. Let me explain this in a post to come.

Look at these idiots out in the street. It's not like Boris Johnson is the 2nd coming of Maggie Thatcher - we wish! He's just slightly to the right, on that one issue of independence, than the other fool. Listen, lefties, if you don't shut up and respect the decision of "the people", we'll sic Jimmy Carter on you next time!

* Ha! Zerohedge even censors its own titles with the asterisks now. Sure, I don't want the whole thing full of profanity, but the comment section has become less inspiring with those computer-generated *** inserted into the cuss words.

** BTW, I'm not enamored at all with most of it, as the original idea of the United States of America was for it to be a Constitutional Republic. I distinctly remember hearing about that. It requires some voting, sure, but mostly by local individuals that we trust to decide for us AND adherence to that often pesky US Constitution.

BernCar
PS: Yes, I agree. That was much worse than the 26th. The first "Progressive Era" resulted in income tax, direct election of senators, alcohol prohibition, and women's suffrage amendments all within about ten years, and all resulting in what many would consider to be the final nails in the coffin of the republic that was probably mortally injured during the 1861 war.
Moderator
PS: Thank you BernCar. Fixed. If i'd have to pick one of the two, I'd say XVI was the worse of the two. How about you?
BernCar
PS: Second paragraph, second sentence: I think you left an X out of the Amendment number. Should be XXVI. Amendment XVI was the "income tax" amendment; we wouldn't want to give that one a bad rap, would we?
Moderator
PS: I'm not sure what day, Dtbb. Maybe they were government employees making use of their short lunch breaks. There are lots of ads out there for professional demon(strators) though. It ain't like George Soros is having a cash flow problem.
Dtbb
PS:Just look at em. A lot of freaks. What day was this from? A weekday? No jobs, or maybe they're professional demon(strators)?