Mike Vanderboegh, of the "Sipsey Street Irregulars" and the III%: 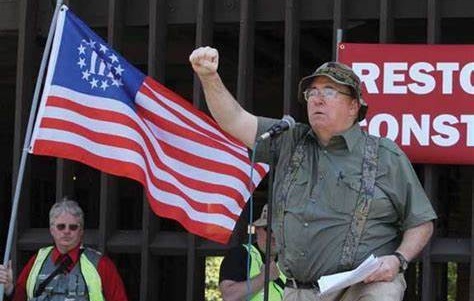 I'd like to add just a bit more to the theme of this past Saturday's Peak Stupidity post on the good news about 2nd Amendment rights supporters getting organized in Virginia. There may be arguments about various selling-out efforts by the NRA over the years (pretty much all we've written on the NRA was in this and this post, regarding the proposed Red Flag laws). I see this huge organization, with 5 million members, and of course the bureaucracy and politics that go with that number, as still a force for good. If nothing else (though there is lots!), the NRA's support for the implementation of concealed carry laws, or for 13 states now, the lack thereof, has been extremely successful:

Now, after that aside, let me explain who the late Mike Vanderboegh up top was. I met him over a decade ago, and had been reading his Sipsey Street Irregulars Constitutionalist blog* for a few years during that period. At some point, summer of '11 or so, the blogger in question became fixated on the Øb☭ma administration's Eric Holder's Gun Walker scandal (dubbed that by Mike V. I'm pretty sure). Truthfully, I was getting tired of that one issue being the subject of almost all posts on this blog that I'd been reading daily back then. With help from Washington Examiner's** gun rights supporter David Codrea, along with an actual honest member of the Lyin' Press, one Sheryl Atkinson of CBS TV, he broke this story to the public. This was one lone blogger, OK with help and some luck, but lots of persistence, without even his own URL! A writer named Bob Owens wrote up a quick summary in this old PJ Media post.

Just to clear it up, this Holder-DOJ deal was NOT a botched effort of any sort, as that just chalks this program of forcing gun stores to sell certain arms to members of Mexican cartels (or their minions), against the onerous Federal firearms laws themselves, to incompetence. Nope, it was a deliberate effort to implicate American guns as being a cause of the drug cartel violence in Mexico. Just a little while before this program, I can remember myself the Hildabeast having used a number like 90% to describe the arming of these cartels with supposedly American guns. The ctrl-left wanted to prove out this number by sending loads of guns down there to be found during investigations of killings.

About the only think I fault Mr. Vanderboegh for is using the death of Border Patrol agent Bryan Terry not just to prove out the effort to walk these guns to Mexico, but to also say, "this gun killed Officer Terry". That's at odds with the correct idea that "guns don't kill people; people kill people". Still, it was all an amazingly successful effort by Vanderboegh, Codrea, and Miss Atkinson to dig out this scandal of the "Department of Justice".


The lone gunman - rising out of those blades of grass":

It's not often one man can make a difference. The 2nd Amendment is also an area in which making a difference often implies making use of the rights specified therein with danger to oneself attached.*** Members of the right often woefully cry "all these guns aren't doing us a bit of good, are they?" Yeah, well it's almost suicidal for one guy to personally make an effort against the myriad violations of our Constitution with use of this last resort implied by Amendment II by our Founding Fathers. Even with the efforts of a few dozen, it can end up suicidal, as seen in Waco, Texas back in 1993. It went a little better at the Bundy ranch a few years back, but the Feral Gov't can just re-group. As incompetent as it is, it has all the resources we can provide it.


A sight bunch of sights for sore eyes 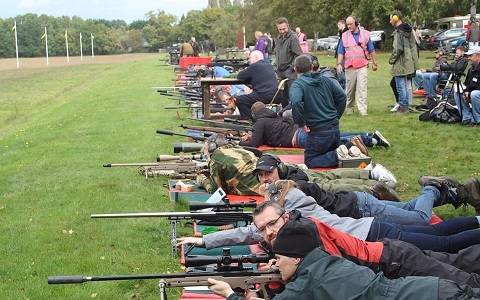 This is why the Virginia efforts to define gun sanctuary counties and cities is such a great thing. There have got to be dozens to hundreds of citizens involved in each jurisdiction. This power in numbers, even medium-sized ones, at this point, is heartening. This is the 2nd example Peak Stupidity has seen near the end of '19, as earlier we noted some serious vocal (for now) pushback against the "refugee" racket in Bismark, N. Dakota a few weeks back.

In both cases, the ctrl-left globalists and commies have had their minions go too far off-narrative. Guys, you've got to get the social media control nailed down some more. People shouldn't be able to talk to anyone about gun rights or fake refugee importation. People have not been isolated and targeted yet. They need to be afraid to open their mouths in fear of losing their jobs within minutes. We've got to have them ready to rat out their best friends on our retroactive gun bans after we take a few in and give them the James Fields railroading or even Koresh their families to, you know, discourage the others. Please, guys, follow the script! You blue-squad young turds, you Soros-implementation local pols, slow it down. We will tell you when you can talk "confiscation" and "felony racism".

Whoa, that was the evil side of Peak Stupidity coming out. I'm all better now. Luckily, as again, we don't want to disturb the enemy when he is making a mistake, we have no Communist readers. They have all been summarily banned as of today. So let it be written, so let it be done!

Lastly, I would like to give a shout-out to Peak Stupidity commenter Joe Stalin, no relation, and pretty far-apart in ideology, from his more-infamous namesake, one can be assured. It's been a while, and I forgot to include him in my thanks in the Christmas post. This has been fixed. Mr. Stalin concentrates his writing (and hopefully other efforts in Illinois) on this most important issue.

* I linked to it as an archive. It's still there on blogspot, but after Mike died, his son (I think) wrote for just al few months afterward, and it's been dormant for 3 1/4 years.

** It's another site I don't go to anymore, one of a series of many of these Examiner sites. At one point, it was another pop-up nightmare, 2nd only to the current Zerohedge, but also, I've heard other bad things about the content lately. Admittedly, I haven't bothered to check.

*** Even the efforts to demonstrate the right to open carry guns (exercising the right being the only way to keep it) can get dicey. I applaud all the efforts in this regard that I've seen.

Moderator
PS: Paleo Libertarian - I definitely should update the blogroll. Lew Rockwell and Codrea's site ought to be on there. Coming, I can't say soon, but as soon as I started making the site better (It's not hard to put the links up, of course, but I'd like to write a decent review of the sites.)
Paleo Libertarian
PS. Codrea has a link on the left hand side of waronguns blog to the archive on archive.org about the entire gunwalking scandal. Codrea also constantly brings up the immigration issue in his articles and blog entries, and how it is directly linked to gun rights. For that reason alone, PS I think you should also link to his blog at waronguns.blogspot.com!

The gun rights people have been very successful in fighting the politicians and media, and I wish the anti mass immigration people could adopt some of their tactics and help explain why the issues are directly linked.

I read his blog along with unz, vdare, and lewrockwell every day. Thanks!
Moderator
PS: P.L., the CBS-TV reporter Sheryl Atkinson (going by memory here) was also instrumental once Mike, especially, stayed on this story like a bulldog. Could one find a Sheryl Atkinson type today? The Lyin' Press is well more far gone than 10 years ago even.

I've read waronguns before. Thanks for writing, Paleo!
Paleo Libertarian
PS Codrea is producing more content than ever at sites like ammoland. His blog, waronguns.blogspot.com, is a great place to stay up to date on his work.

It really is amazing how Codrea and Mike broke the F&F story, kept it alive by keeping the source in touch with the right media people, and would not let the media detail the story. It out the gun banners on the defensive and helped save our rights for several more years.
Moderator
PS: Thank you all for reading here to begin with. I raise a glass of virtual champaign to you commenters and to more stupidity in this 3rd decade of what may be later dubbed the "century of stupidity". Prost!
BernCar
PS: Same here.
Dtbb
PS:I agree with MBlanc46.
MBlanc46
PS All the best for 2020, Achmed! And keep on postin’!