McDonalds' stupidity - right off the grill and into the fryer

While running the plumbers' snake through the sewer line today, we fished out this old tweet that was still in its wrapper (something about "billions and billions served" written on it). Holy cow! If I'd known the stupidity level was so high, I'd have hooked up the tweetceiver long ago. 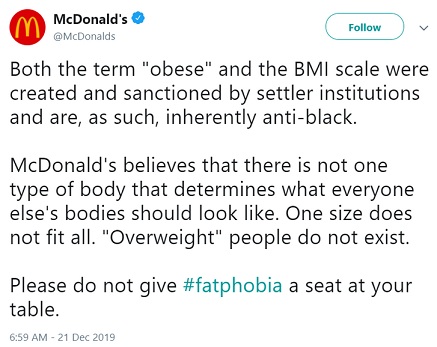 Are people supposed to take this seriously? I wasn't born yesterday, McSpokesperson. I knew 30 years ago that that "special sauce" on the Big Macs is nothing but Thousand Island salad dressing (if you're lucky), and now you're telling me overweight people do not exist? Maybe that walk through the mall, trying to get around just 3 people taking up the entire corridor was just one of those frustrating dreams.

4 out of 5 doctors are begging to differ with you, McTweeter, and the 5th one is too winded to make it up the stairs to the office to answer the survey.

No, obesity has become a big problem, in America, and elsewhere all around the world. Ignoring it is not going to make it go away. I don't totally blame the individuals, as the food supply is not at all what it used to be, and most of us can't live the lifestyles of our 1/2 century-ago ancestors. Maybe McDonalds feels guilt over their contribution, but I don't blame them. Nobody's got a McUzi to your gut, forcing you into the joint. It's more likely, though, that McCorporate is using this tweet as cover for getting rid of those expensive-to-keep healthy foods. It's a lot easier to stick with the cheap 3/16" beef patties, with a couple of derelict kangaroos jumping around in the freezer, just in case of supply-line problems.

The stupidity of this tweet is just amazing, but then the Political Correctness of that first sentence is a whole nother thing. This corporation aims to show us that they hate the traditional America of the brothers McDonald and the Krocs. Those guys may be rolling over in their graves right now, if they aren't too obese to do so. "Settler institutions"?! That's truly a new one for this blogger. Traditional America is anti-black - that's the point, I think. That is, unless this line is an inadvertent admission that black people are the one that are the most, well, not obese or overweight, as there's no such thing, but most likely to sink an inner tube to the bottom of the Chattahoochee.

The man's right about one thing: You really don't want one of those #Fataphobics sitting at your table, if you are one of those McDonalds "heavy users"*, as you may send the guy catapulting into the deep fryer.

I guess, being as American as rectangular factory-fresh apple pies, Big-Biz icon McDonalds has every right to lecture Americans on what terms to use in reference to folks who've spent too much time in establishments like their very own. You heard it from the man: 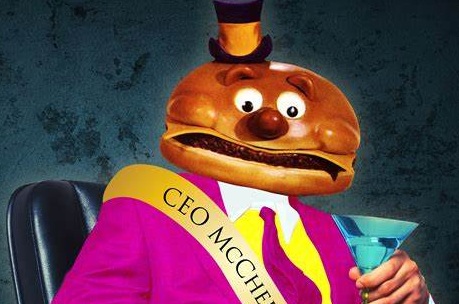 * That's an ironic thing here. The fast food industry uses the term "heavy user" for very frequent customers of their restaurants. It doesn't have anything to do with weight.

Moderator
PS: Sorry for the late reply, Epistemai. No, that tweet is not from any conspiracy. It was written out of stupidity, with a big dose of Political Correctness. Fat people know they are fat, and yes there is such a thing as a BMI, as inapplicable it may be sometimes. Usually marketing ploys are not done with the express purpose of pissing off the customers, but, hey, I didn't go to business school, so what do I know?
Epistemai
PS: It never fails to impress me how gullible right-wingers are. This is a marketing ploy meant to sell more of their disgusting greasy food. It's not a conspiracy to replace pure blooded Aryans with those awful scary Negroes. You'd think you'd be praising Big Mickie for shortening the lives of the folks you fear so much by selling them toxic was`te for food
Moderator
PS: Haha, Dtbb, those kind of jokes (the part about your baiting your girlfriend with the story) are some of my favorites. I'll check it out shortly. The link title is cracking me up already.
Dtbb
PS:Me and my ex girlfriend saw the real news story and then I sent her this link; she bought it hook, line and sinker.
https://babylonbee.com/news/disaster-as-obese-american-children-catapult-mexicans-over-the-border-via-seesaw