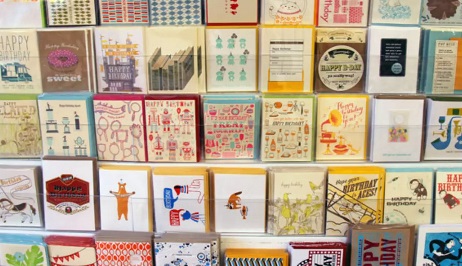 We wanted to give a "thank you" card and some chocolate to a neighbor who'd been very kind to our son. I ended up at the drug store looking at that long aisle of cards. Without getting something humorous or stupid, it seems like you're gonna take a 4 buck hit nowadays. Now I could complain about the inflation, though, hedonically*, I suppose maybe it's not so bad, as these cards are thick, folded twice and have cut-outs or glitter. So there's that ...

The thing is, one customer told me that there was a deal on nice boxes of chocolates, as I brought a more expensive box up front. Hell, even the cashier told me where to get the better deal - 70% off, man! So there was no inflation this day, on the whole. OK, as I realized that greeting card that I'd settled on costed more than one of the boxes of chocolate (got a few because of the deal, see?), I had some more thoughts about these cards.

Hallmark is the big cheese in this "industry". As a matter of fact they make a whole conglomerate industry out of it, as they've got their TV movies, the card, and who knows what else? It's one big sappy conglomerate, as the chocolates will be too, if you don't forget to move them away from the fireplace.

Women really get into those feelings, and therefore sending the right feeling to someone via the card is very important. Hallmark and the other brands have all different kinds of feelings written down that are apparently worth 4 dollars a piece and northward. I'd personally want the chocolate over the card, getting a much better feeling out of it, but women appreciate them both. If that card says the wrong thing though, watch out! You're gonna hear about it, and it won't be in the trash enabling you to deny the whole thing or blame her eyesight.

I think the idea now, is for those card to have more specific lines on them, than just "thank you", making you stay in the store longer, and enabling a better pricing schedule - $3.99 for something that makes sense and $2.49 for the ones that are stupid. (Doesn't the pricing method for items like this (books too) - hard-coded on the back - make you glad you're not a Canadian?)

This greeting card industry is purely for women, as most guys would be much happier sending and receiving simple one-liner pieces of thick paper the size of an index card. Of course, it would generate fewer BTUs 2 minutes later in the fireplace ... There really should be no complaints by me though, as it's just the lack of time and some laziness that prevents us from making our own cards, which we have before. It takes a lot of feeling to make your own card, right? That should count for something.

When we tried our own box, the chocolate had kind of a stale feeling - hey 70% OFF!

Moderator
PS: BernCar, this was in the drugstore with no hardware unfortunately. I would head to the blood pressure machine ... just checking ...

Yes, I remember "5 and dime" You can't get a gum ball for even the dime now.
BernCar
PS: Well, they used to be called five-and-ten-cent stores in days of yore.

My wife will spend thirty minutes at the card rack picking out a greeting card. She actually reads the messages inside, as opposed to just flipping the card and looking for the price. If I see her heading to the card rack, I amble over to hardware for more bungee cords or ratchet straps.
Moderator
PS: Thanks, we do have one of them (may be Family Dollar) pretty close too. Would I have gotten those chocolates for as cheap? Not sure.

BTW, how long are we from the day when these stores (Family Dollar, Dollar Tree, Dollar General) are going to have to break down and put big "5"s on the store? It's either that, or find a country much cheaper than China to source their stuff.
Dtbb
PS:Two words: Dollar Tree.